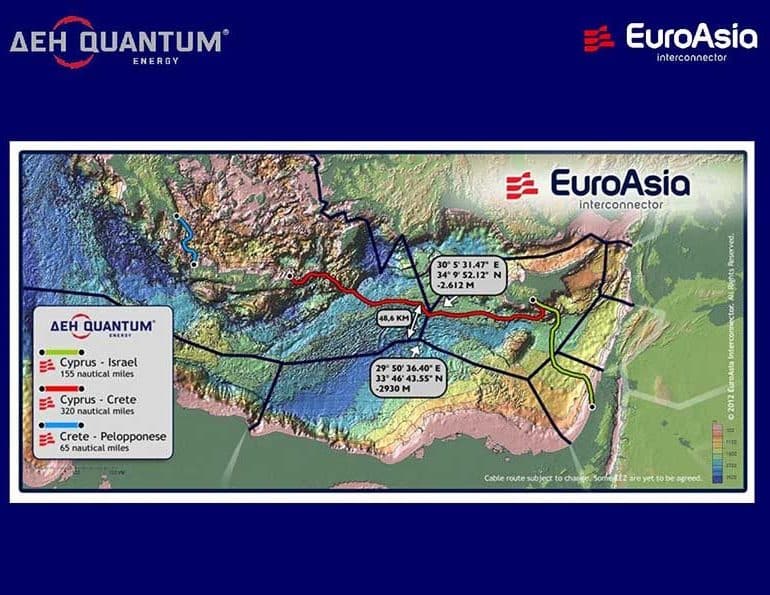 For the first time in 25 years, Crete suffered a blackout on March 22 following an explosion to an old transformer which plunged the Greek island into darkness and made it vulnerable to future power outages.

Fortunately, the timely response of the power company staff, emergency services and local authorities ensured the damage was limited and lives were not lost. The event also prompted residents and local politicians to demand an end to delays of the Crete-Attica electricity interconnection that would ensure the island’s energy security.

Project promoter EuroAsia Interconnector, tasked with connecting the electricity grids of Israel and Greece, through Crete and Cyprus, totally agrees that a solution needs to be found to secure Crete’s energy supply. This can only be done through a direct subsea cable connection to mainland Greece.

Since 2012, our vision has been to end the energy isolation of Cyprus, which remains the last non-interconnected member state of the European Union, and the same goes for Crete.

The EuroAsia electricity connection project became a necessity after the lethal munitions explosion on July 11, 2011 at the Mari naval base took out Cyprus’ main power station at Vassiliko. A power plant that generated 90 per cent of the island’s electricity needs was offline for a year, resulting in rolling power cuts for households and businesses.

From the outset, it felt like Cyprus was in a state of war with year-long power cuts and electricity rationed according to a list of priorities. As a result, the Cyprus economy was deeply wounded, and its energy security compromised with the consequences felt in the years that followed.

Crete today must avoid a similar fate, which is, essentially, why we embarked on this journey in 2012 to find the best way possible to prevent a repeat of such disasters that left Cyprus without power. The only feasible solution is to connect Cyprus with a single European electricity system through Crete and Attica.

This is an extremely complex project with incredible technical and engineering challenges, such as the depth of cable laying, which was originally estimated at 2,300 metres, but for security reasons switched to a greater depth of 3,000 metres. In addition, there was the expensive task of building the electrical interface to dimensions which had not been attempted before.

Taking into consideration the national interest and the urgent need for the interconnection of Crete with the rest of Greece, in April 2018 EuroAsia Interconnector launched an international tender for the timely implementation of the project in its entirety.

Based on the original timeframe and progress made by the project promoter, the interconnector would be in the construction phase and on schedule for completion within the agreed deadline of June 2022 for the Crete-Attica link.

Unfortunately, this timetable has been disrupted due to a policy U-turn by Greece’s environment and energy ministry which fundamentally insists on the Crete-Attica section being implemented as a new national project. This approach breaches the European Union’s legal and financial framework that establishes a Project of Common Interest (PCI).

As frequently pointed out by the European Commission and Climate Action and Energy Commissioner Miguel Arias Canete, the quickest way to implement the electricity cable between Crete and Attica is via the EuroAsia Interconnector.

It is worth noting that the Crete-Attica link will cost Greek consumers less since the EuroAsia Interconnector is eligible for an EU grant of €350 million as a PCI-listed project.

The project also enjoys lower financing costs due to its access to European Investment Bank funding, while estimates put construction costs for the Crete-Attica section at around €500-600m lower than the corresponding budget of an alternative national venture that would require longer to complete.

I sincerely hope a more reasoned and mature approach will soon emerge that enables the entire Israeli-Greek electricity interconnection project via Crete and Cyprus to return within the fold of the European Union so the much-needed Crete-Attica electricity link can be built in the quickest possible time at the lowest possible cost for the Greek taxpayer.

Marios Demetriades is a former Minister of Transport, Communications and Works of the Republic of Cyprus and a board member of the Strategic Council of EuroAsia Interconnector

Leclerc with his first pole position for Formula One