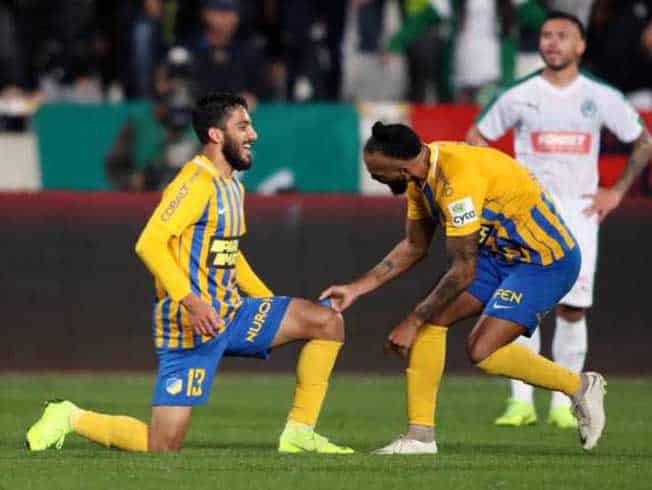 Apoel, who lead Apollon by a single point, will be looking to extend their impressive winning run against Omonia to a record 14 consecutive games dating back to February 2016

Two huge games will take place this weekend in the fourth round of the Cyprus playoffs with leaders Apoel taking on their local arch-rivals Omonia, while second-placed Apollon travel to Larnaca to face AEK.

The two games will not decide the team that finishes top in May, as there will still be six more matches to play, but they may tilt the odds in favour of one of the two championship challengers Apoel or Apollon.

The champions, who lead Apollon by a single point, will be looking to extend their impressive winning run against Omonia to a record 14 consecutive games dating back to February 2016 and hang onto top spot irrespective of the result in Larnaca.

However to do this they will need to overcome one of their poorest home runs in recent history that sees them without a win in four games.
Apoel’s Italian coach, Paolo Trammezani, has come under a lot of stick recently from their supporters for his team selections as well as his style of play despite being top of the league and in the last four of the Cup.

There have been a lot of groans with the Italian’s perseverance with some players who have been underperforming and the omission of others, most notably Apoel’s captain and longest serving players Nuno Morais.

Morais though may get his chance against Omonia as the player who has replaced him in the past couple of months, Savvas Gentzoglou, is sidelined through injury. Trammezani though is unpredictable when it comes to team selections and he may decide give Argentinian Tomas de Vincenti a starting spot even though the Argentinian has been out of action since January.

Central defender Nicolas Ioannou is the only other player who will miss the derby through suspension and he will be replaced by fit again Praxitelis Vouros. There is also a question mark over the physical strength of Apoel’s Jordanian international Mousa Al Taamari who played in three games over a 10-day period for his national side.

Omonia has seen eight coaches come and go since the last time they defeated Apoel and this year’s coach Yiannis Anastasiou will be hoping to put an end to this miserable statistic.

During his pre-game press conference Anastasiou pointed out that past results against Apoel were not at all flattering but promised that the team will try and put a stop to this negative run.

“What I can promise our fans is that we shall fight until the last minute to get a good result as we have done in all the games I have been in charge of,” Anastasiou concluded.

Omonia defender Marco Motta also talked about his team’s miserable run against Apoel but said that “past results can help us improve and even though we are up against a very good side with the right concentration and passion we can take the three points.”

Second-placed Apollon face AEK in Larnaca, one of only two teams this season that they have not defeated, the other one being Apoel.
Apollon coach Sofronis Avgousti must be ruing his luck as he will be without his two key players in midfield, the injured Chambos Kyriacou and the suspended Esteban Sachetti, for such an important game.

To add insult to injury Kevin Bru, a likely replacement in midfield, suffered a knock in Thursday’s training session and is now a major doubt for the game as is Facundo Pereira who will face a late fitness test.

There are no such worries for AEK coach Imanol Idiakez who sees his leading scorer Ivan Triscovski, Acoran Reyes and Nacho Cases back in the reckoning after injuries while the only question mark concerns nippy winger Téte.
“It’s a big game for us against one of the best teams in the league and we hope that our supporters can push us towards the three points,” Idiakez remarked.

In the final top group game Nea Salamina are at home to third-placed AEL.
Nea Salamina are unbeaten in their opening three games and a win against AEL will see them close the gap to the teams above them and keep alive their slim chances of a top-four finish.

AEL’s season has imploded and they remain the only team in the playoffs so far not to have picked up a point.

In the relegation scrap two points separates four teams with one of these four dropping to the second division next season.
Enosis Neon Paralimniou are at home to Pafos FC in a game with no favourite, while relegation-destined Ermis Aradippou take on Doxa Katokopias.

The only team well clear of any relegation worries is Anorthosis and they are at home to Alki on Monday evening.