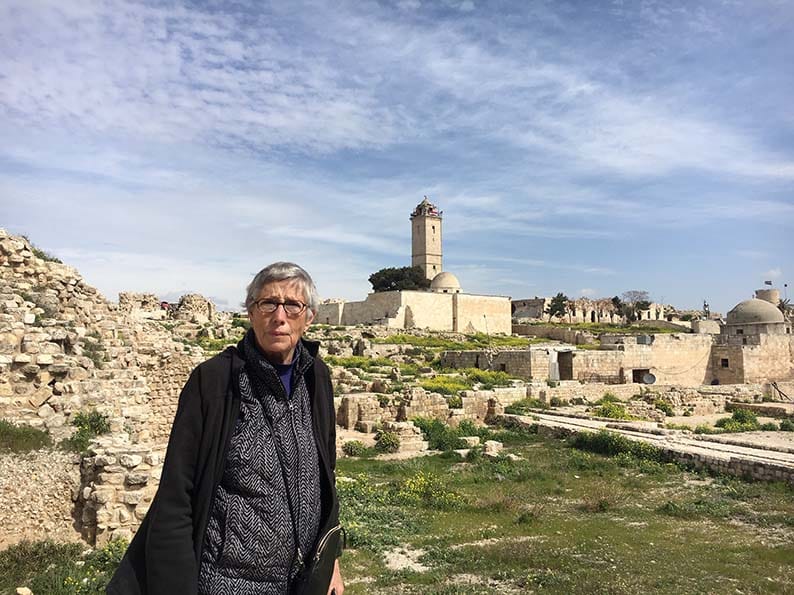 Michael Jansen on top of the Citadel in Aleppo 2017

Windows on Interesting Times, a new book by a veteran Middle East journalist Michael Jansen, refers to the windows she opens with her eyewitness accounts of seminal or dramatic events, notably in the Middle East during the later second half of the 20th century and first decade or so of the 21st.

This collection of stories/articles/memories/meetings/impressions and outcomes glide along streams of thought rather than daily entries in a journal or systemic press coverage.

No journalist is detached or neutral, the Nicosia-based author writes. But she then goes on to say that she, a Muslim, is as critical of Muslim as Christian or others’ ‘misbehaviour’. Her only noticeable bias is against occupation – Turkey in Cyprus, Israel in Palestine or the West Bank, etc.

The book’s title was inspired by the Chinese curse, ‘May you live in interesting times’ – wars, genocide and destruction.

Michael Jansen was born into a Protestant family in 1940, in Bay City, Michigan, as Michael Elin Fancher, a name of French Provençal origin, where her ancestors fled the 16th century persecution of Huguenots. Her father didn’t like girls’ names and her name was the reason she stood out at school.

She had known nothing about the Middle East until the summer of 1957, when, at an impressionable age, she met a group of Iraqi students at the University of Michigan, where she was attending a two-week journalism seminar for high school students. Shy, a skinny 41 kilos, hair cropped short and teeth bound with platinum bands and wires, she was dispatched to a foreign students’ reception and told to interview ‘interesting’ people. She froze on the edge of the gathering until a tall, dark, handsome stranger appeared and introduced himself as Sami. He was Iraqi and offered to introduce her to his circle of friends. Sami urged Michael to read the Koran, which she did.

A year later she interviewed Sami and other Iraqi students at the university about the revolution in their country and submitted to The Bay City Times articles on the ‘Iraqi revolution’ that had overthrown the monarchy and slain the young king, Faisal II, his hated uncle, Abd al-Ilah and Nuri al-Said.

That fall she ‘escaped’ from Bay City to Mount Holyoke College, a private women’s liberal arts college in South Hadley, Massachusetts, the oldest institution within the Seven Sisters schools, an alliance of elite East Coast liberal arts colleges that arose as a female equivalent to the then male-dominated Ivy League.

After receiving her MA on Middle Eastern politics at the American University in Beirut, she was interviewed for a job as an assistant to her future husband, Godfrey Jansen, honorary editor of a quarterly, The Middle East Forum and Levant correspondent for The Statesman, New Delhi and Calcutta for ten years, followed by an 18-year stint with The Economist. He had been in and out of the region since 1948 as Indian press attaché, UN advisor and Indian diplomat in Beirut. He had, by the time he interviewed Michael, developed more than a superficial knowledge of Cairo, Beirut and Istanbul. He had wide contacts throughout the region, as well as a deep appreciation of its economic and political workings. 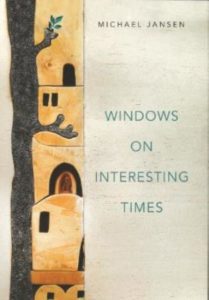 He sent Michael on missions to secure articles for the journal and she quickly became as familiar with the region’s economic and political workings as he was. She formalised her faith as Islam in 1967 and in 1974 made the journey to Mecca, the Hajj, an annual pilgrimage to the holiest of Muslim sites, and a mandatory religious duty that must be carried out at least once in a Muslim’s lifetime.

The Jansens lived in Lebanon for many years before moving to Nicosia during the Lebanese civil war, which lasted from 1975 to 1990.

Michael has written books on Lebanon and Palestine. As Middle East correspondent since 1987 for The Irish Times, she covers Lebanon, Syria, Palestine and Egypt, and Cyprus. She wrote for now-defunct Middle East International and has served as regional analyst for The Deccan Herald (Bangalore) and columnist for The Jordan Times and The Gulf Today. She is the author of five books, in particular, The Aphrodite Plot, which tells the story of superpower intrigue behind the headlines between Easter and August 1974; a series of events that shook and divided the island of Cyprus.

Windows on Interesting Times is not journalism. It draws no conclusions, accuses no state of misdemeanours, favours no particular political party or nation. But it does throw a spotlight on events like those in Tahrir Square, Cairo, 2011, where she was posted to report on the Arab Spring, which led to unspeakable rioting, violence and killing by the Egyptian military under the orders of an ageing president, Hosni Mubarak, who sought to avert what was a failed attempt at a revolution and prevent his removal from public office. He was replaced by the Muslim Brotherhood, which was soon ousted by then general, now president of Egypt, Abdel Fatah el-Sisi.

In 2002 she interviewed Yasser Arafat several months after the Israeli invasion of the West Bank, which she covered – dangerous times and dangerous places. But she was no sissy-journalist, instead boldly going where few had gone before: interviewing diplomats, politicians, freedom fighters, ordinary people and human rights’ defenders of all hues; you name it, she met them and wrote about them.

Her daughter, Marya, also a writer, is married and lives with her husband and daughter in the US.

Michael’s husband died in 1998, but she continues to live in Nicosia. At 78 she still jumps across the water to the world she loves when instructed to do so by her editors. Gertrude Bell, maybe not; but a free spirit certainly.

Do we all return to our roots one day? I doubt Michael will, she loves and knows the Middle East too well.

Windows on Interesting Times is published by Rimal Books and is available at several good bookshops on the island.

Tales from the Coffeeshop: a feast for the East Med Draculas