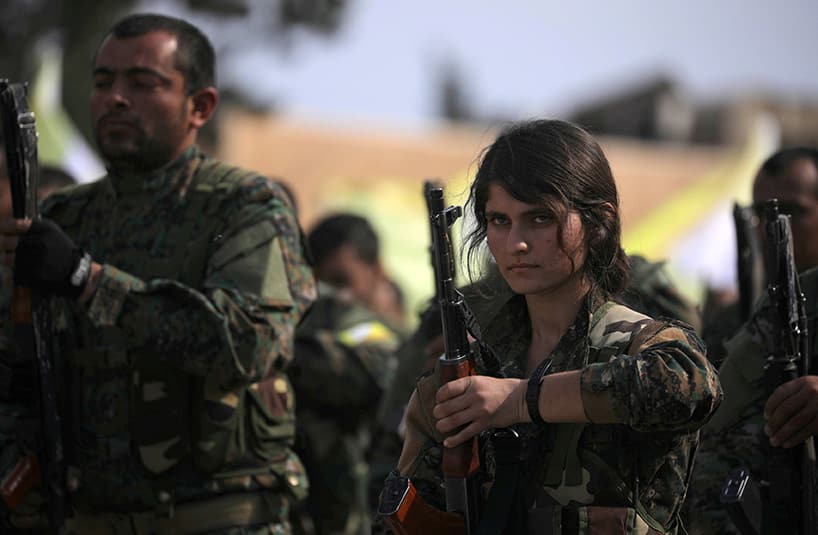 A fighter of Syrian Democratic Forces (SDF) holds her weapon as they announce the destruction of Islamic State's control of land in eastern Syria, at al-Omar oil field in Deir Al Zor, Syria March 23, 2019. REUTERS/Rodi Said TPX IMAGES OF THE DAY

Isis is now officially declared defeated. The contribution of the US military to the victory over the radical Islamist forces was pivotal. However, the effort and the sacrifices of the local people, all Muslims of different countries, to triumph over the violent extremists were particularly noteworthy.

Muslims have fought one another aplenty in their 1400 years of history, just as Christians have used violence as a means of settling disputes amongst themselves. The longest war of the 20th century, bar Vietnam, was the eight-year war between two Muslim countries, Iran and Iraq.

This time, however, it was different. In the fight against Isis there was the battle of ideas representing two different versions of Islam, one that was militant and believed the application of indiscriminate violence was justified to serve their cause, and the other that rejected political Islam and subscribed to the convention that located religion in the more personal realm of individuals.

History has indicated that religions and sects are best challenged by their own kinds. It was the Protestant movement that successfully defied the monopoly of Catholicism and eventually established itself as a widely followed sect in Christianity. Similiarly the dissents of the non-Arab Muslims against the Arab Caliphs in the early centuries of Islam were usually couched and expressed in competing religious and sectarian terms.

Engaging religion with hostile atheist doctrines can at best yield results only in the short-term. The brutal suppression of religious beliefs by the ‘Godless’ Soviet Union for over 70 years failed to dislodge religion from the psyche of the society. Nor could the expunging of Islam from Turkey’s constitution by Ataturk in 1920s keep religion an outsider for too long.

As religions aim for the souls of their followers it is only natural that the most important battleground for them would be the hearts and minds of the people. And although this conflict is eventually fought out in a violent fashion without, the inspiration and the driving force come from within. It is ultimately the adherents and the followers of the opposing belief systems that should engage one another.

Just as it would be right to claim that radical Islam has a certain, though diminishing, constituency amongst some Muslim youth it is equally valid to state that those fighting religious extremism have their own devoted followers. And as the triumph of Egyptian people over the Muslim Brotherhood and the recent defeat of Isis have indicated Islamist fundamentalism appears to be on the wane.

Important battles against religious radicalism in Islam have been fought and won but the war is definitely not over yet. The policies of the young Prince Mohammad in Saudi Arabia, the birthplace of Islam, can go a long way in attempting to pave the way towards critical thinking in religious jurisprudence. The experience of governance by political Islam in the past decades has more than anything else exposed the fallacious claims of those who have a claim on the monopoly of religious interpretation.