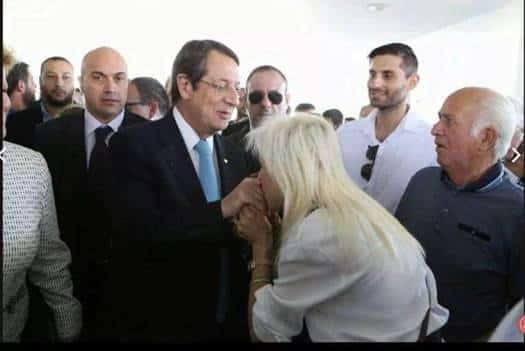 In a week that saw Pope Francis in the news for pulling his hand away as Italian worshippers tried to kiss his ring, our own Prez Nik displayed no such anti-social tendencies. Our Nik was more than happy to allow worshippers to kiss his hand during a March 25 ceremony. He subsequently sent assurances to his friend the Archbishop that he had no plans to usurp his role, at least for now

THE LEECHES of the public sector, affectionately known as the public parasites, were handed another legal victory over the state by the administrative court which ruled this week that the right of these hideous creatures to suck the blood of the taxpayer cannot be curtailed under any circumstances – not even when the blood is close to running out and more sucking would kill their victim.

The blood-sucking cannot be restricted in any way, ruled the court, and the blood the Draculas of the East Med had been deprived of since 2012, when the state blood banks ran dry and the government was forced to impose cuts and pension contributions, had to be returned to them with interest of course as soon as possible.

The state does not want to face damages claims for extending the traumatic experience of its blood-sucking employees who would rather see their country bankrupt and their countrymen completely impoverished than give up a millilitre of the generous quantities of our blood they felt they were entitled to.

Was it a coincidence that on Friday, the day the admin court decision was announced, the leader of the public parasites’ union, a beaming, smiling Glafkos Hadjimourmouris was seen at the finance ministry? Had he gone there to gloat or had he decided to act as a debt collector for his vindicated members? He was not accompanied by any heavies.

FOR THE sake of fairness, it has to be mentioned that it was only about a hundred or so public parasites that took the state to court over the pay cuts, so should we tar all of them with the same brush? According to finance ministry sources, only the blood-suckers that went to court will be reimbursed, while their less greedy colleagues will get nothing.

But the problems for the taxpayer will begin now because all public parasite wages will now have to be restored to their pre-2013 level immediately so that the state complies with the interpretation of the constitution made by the judges of the administrative court, who ruled that the pay cuts were in violation of Article 23 of the constitution protecting the right to property.

The government had decided to lift the pay cuts gradually, over the next four years, but now this will have to take place immediately, increasing the public pay roll by about €200 million. The finance minister on Saturday said the government would appeal the decision, but given past rulings by the parents of the employees of Polys Polyviou’s law office, the clever money will be on the appeal being rejected.

It was the supreme court that created the problem with an earlier ruling that a pension was regarded as someone’s property, but there was another twist according to a finance ministry source. The state was defended in the latest case by the office of the attorney-general, the staff of which had demanded they should be exempted from the pay cuts back in 2013, just like all the judges were.

They were not, so they may have handled the case feeling a sense of injustice.

THE ADMIN court ruled that the freeze of incremental pay rises, the 3 per cent contribution to pensions and a cut in public parasites’ pay (cuts were progressive with 12.5 per cent being the highest) was in violation of Article 23 of the constitution, regarding the protection of the right to property.

I am no lawyer, but I understand language enough to know that judges took a big leap in interpreting wages as being the same as the right to property; it could be described as poetic licence by a law ignoramus like myself. The same interpretation was made last November by the admin court, in a case brought by pensioner parasites challenging the state’s decision to cut pensions, and it was based on an earlier supreme court ruling that said a pension was property.

The November ruling was that the law cutting pensions was in breach of the right to property that was protected by the constitution. This is where the interpretation of language comes in. By what logic is a pension considered property? Can it be bought and sold like all other property? Can it be used as security for a bank loan? And if a pension is a property, why can’t it lose value like all other properties? Where in the constitution does it say that the value of a property must be fixed and can never go down in value?

IN ITS November 2018 decision, the court said the 2012 law cutting pensions violated article 23.3 of the constitution, which allows for restrictions on the right to property but under very specific and explicit circumstances. None of these circumstances applied in this case and therefore the pension cuts were unjustified, the court decided.

Article 23.3 of the constitution states: “Restrictions or limitations which are absolutely necessary in the interest of the public safety or the public health or the public morals or the town and country planning or the development and utilisation of any property to the promotion of the public benefit or for the protection of the rights of others may be imposed by law on the exercise of such right.”

Reading the above anyone with half a brain would realise the constitution was referring to real estate, plots of land and buildings, when mentioning property, not wages and pensions. What do pensions and wages have to do with “town and country planning or the development and utilisation of any property to the promotion of the public benefit”?

Of course the circumstances for restrictions on the right to property stipulated by the constitution did not apply to pension and pay cuts, because for the idiots who drafted the constitution property was real estate. These idiots could not have foreseen that many years later wise judges would decree that pensions and wages were regarded as property.

SPEAKING of property rights, you have to take your hat off to all those protesters mobilised by Akel to take part in a march to the presidential palace to demand that the properties of the Co-op Bank be returned to “its legal beneficiaries, the members of the co-op credit institutions.”

This demand, endorsed by all the pandering parties and the government, raises several philosophical questions.  How can there be members of credit institutions that no longer exist? And how can these members of non-existent co-op institutions, be legal beneficiaries of anything considering the co-op bank, established through the merging of all these institutions, belongs to the state, which paid to save them from bankruptcy?

If the members want the properties back, they should pay for them, as legally speaking they belong to the state. The only problem now is that there are no co-op credit institutions to give them a loan that they do not have to repay. Perhaps they should take the state to court where a judge could rule that taking ownership of the assets of a bankrupt company is a violation of the property rights of the shareholders.

THERE was no shortage of ultra-patriotic messages from our parties on March 25th, the anniversary of the 1821 Greek uprising against the Turks. Speaking after the student parade, Ethnarch Junior said the “lessons and principles of the Greek revolution could become a source of inspiration and guide us in our struggle for the liberation of our occupied country, linking the message of the anniversary of the national uprising with the Cyprus problem.”

More patriotic than Diko and even Elam was Perdikis’ green ultra-nationalists, who believed that “at, present there is a search for a new Greek uprising against visible and invisible enemies.”

Perdikis’ recycled nationalism declared: “Today’s descendants of the Greek revolutionaries of 1821 have a duty to continue the fight for freedom, progress and prosperity of the country, having as its ideological basis and example the self-sacrifice of the Free Besieged that always remains current.”

It just makes you wonder who these deluded, nationalist fools were addressing, talking about self-sacrifice. Was it the blood-sucking public employees who were not prepared to sacrifice five per cent of their monthly salary to save their country from bankruptcy or the teachers who closed the schools rather than sacrifice a 40-minute free period?

SO-CALLED negotiator, Andreas Mavroyiannis, who has been paid to do nothing since July 2017 when the talks collapsed has made his own personal self-sacrifice – though not for the liberation of the country – by taking up the position of Kyproulla’s permanent representative at the UN.

Mavroyiannis had been telling friends that, on a point of principle, he would not take any position that would make him the subordinate of his former underling, foreign minister Nicos Christodoulides. In the end, however he sacrificed his principles, his pride and his dignity for the good of his country. Living in the Republic’s super-luxury flat in Manhattan and enjoying life in the Big Apple at the taxpayer’s expense made his sacrifice just about bearable.

Hopefully, Christodoulides will order him around regularly just to remind him who his boss is. Meanwhile the government spokesman said Mavroyiannis will continue to be our negotiator, as he has done such a sterling job in in the last 16 months when he had nothing to do.

THE GOVERNMENT also officially announced the appointment of super-hardliner ambassador Tasos Tzionis as perm sec at the foreign ministry, as we had reported a few weeks ago. Tzionis’ arrival has nothing to do with Prez Nik’s rebirth as anti-settlement ultra, but was a reward for all the sacrifices he made over the years to prevent reunification.

If there had been reunification it might have been the turn of a Turkish Cypriot to be perm sec of the foreign ministry. As we have already reported, Tzionis sacrificed the cushy job of ambassador to Rome to take up the post of perm sec, a year before he is due to retire, as this will beef up his state pension.

It is not possible for the foreign ministry to turn more hardline with him as perm sec because Mr and Mrs Christodoulides, both Tzionis proteges have already taken care of this.

EARLIER in the week, a Japanese academic was not allowed to entry into the Republic because she was to attend a conference organised by a pseudo university in the north. Cops at Larnaca airport had stamped her passport and then took her in for questioning. According to reports she was asked about the Cyprob, but she replied that her interest was physics.

If she had said that she believed in the sovereignty and territorial integrity of Cyprus, the return of all refugees to their homes and the withdrawal of all troops from the island, would the cops have allowed her through? As she did not say all this, she was put on a flight back to Dubai and arrived in the north via Turkey.

This confidence-building policy has the signature of Mr and Mrs foreign minister all over it, as does the arrest of a Syrian captain who docked his Belize-flagged ship in Limassol last weekend. Our port police had discovered that his shop had docked in the pseudo port of Famagusta in January so they arrested him. Limassol district court fined him €1,800 and let him go.

Our View: Govt should ignore irrational demand for co-op assets

A love affair with the Middle East