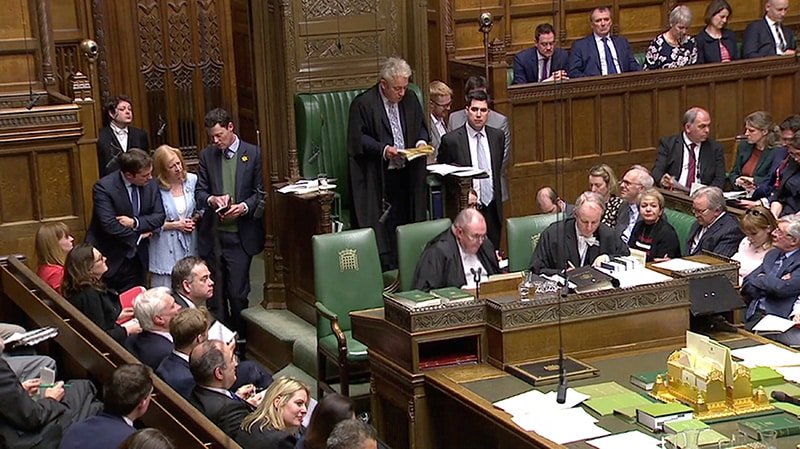 LONDON, April 1 (Reuters) – Britain was no nearer to resolving the chaos surrounding its departure from the European Union after parliament failed on Monday to find a majority of its own for any alternative to Prime Minister Theresa May’s divorce deal.

After a tumultuous week in which May’s divorce strategy was rejected by lawmakers for a third time, despite her offer to quit if it passed, the future direction of Brexit remains mired in confusion.

In a bid to break the impasse, lawmakers on Monday voted on four last-minute alternative Brexit options for what is the United Kingdom’s most far-reaching policy change since World War Two. All were defeated.

The option that came closest to getting a majority was a proposal to keep Britain in a customs union with the EU, which was defeated by three votes.

A proposal to hold a confirmatory referendum on any deal got the most votes, but was defeated by 292-280.

The government is firmly opposed to both of these: the first, because it would mean giving up the freedom to make independent trade deals that many of her eurosceptic lawmakers long for; the second, because May says it would betray the voters who were promised that the result of the 2016 referendum would be implemented, and potentially solve nothing.

Brexit minister Steven Barclay said after the results were announced that the default position was still that Britain would leave the EU on April 12 without a divorce deal – the nightmare scenario for many international businesses.

“The only option is to find a way through which allows the UK to leave with a deal,” told parliament.

He hinted that May could put her deal to a fourth vote this week in the hope of securing an orderly exit before European elections are held from May 23 onwards – an unpredictable complication that May’s government is determined to avoid.

“If the house were to agree a deal this week, it would still be possible to avoid holding European parliamentary elections,” Barclay said.

May is due to hold five hours of cabinet meetings with senior ministers on Tuesday to plan the government’s next moves.

Sterling fell almost 1 percent to $1.3048 after the vote results were read out by the speaker, John Bercow, to stand around 0.5 percent lower on the day.

The third defeat of May’s withdrawal agreement on Friday – the date Britain was originally scheduled to leave the EU – has left one of the weakest British leaders in a generation facing a spiralling crisis.

Her government and her Conservative Party, which has been trying to contain a schism over Europe for 30 years, are now riven between those who are demanding that May engineer a decisive break with the bloc and those demanding that she rule out such an outcome.

If May were to throw her weight behind either camp, she would risk tearing her party apart and bringing down the government.

RIDDLE OF THE SPHINX

Some Conservative lawmakers have warned they will support a motion of no confidence if she accepts calls for a Brexit that maintains many of the existing close economic ties with the EU.

From EU officials watching from Brussels, there was one plea – make up your minds.

“A sphinx is an open book compared to the UK,” said Jean-Claude Juncker, European Commission president. “Nobody knows where it is heading. Would like to make the sphinx talk and tell us in which direction they would like to go.”

But while government and parliament struggle to solve the riddle, business is already suffering.

Two of Britain’s biggest carmakers, BMW and Peugeot, both said that, despite the delay to Brexit, they would go ahead next week with factory shutdowns that had been deliberately scheduled to minimise disruption to their cross-border supply lines in the event of a no-deal departure on March 29.

The political deadlock in London forced May to ask for a delay but as things stand, Britain will now depart at 2200 GMT on April 12 – unless May can present another viable option to EU leaders holding an emergency Brexit summit on April 10.

Hardline Conservative eurosceptic Mark Francois told Reuters: “What took place in the House of Commons this evening was an attempted coup against the British people and the coup has failed … I think ‘no deal’ is now highly likely.”

DEFEATED 276-273 C) Customs Union – Kenneth Clarke
Calls on the government to ensure any Withdrawal Agreement and Political Declaration negotiated with the EU includes a commitment to negotiate a permanent and comprehensive UK-wide customs union, and to enshrine this aim in law.The same proposal from Clarke last week was rejected by just 6 votes, with 265 lawmakers supporting it and 271 opposing it.

DEFEATED 282-261 D) Common Market 2.0 – Nick Boles
Calls on the government to negotiate an enhanced Norway-style deal which would include membership of the EU’s single market as well as a customs arrangement with the EU. While Boles has tweaked some of the detail, a broadly similar proposal he put forward last week was supported by 189 lawmakers and opposed by 283.

DEFEATED 292-280 E) Confirmatory public vote – Peter Kyle
Says parliament will not ratify any Brexit deal unless there is a confirmatory referendum to approve it. The same proposal, then put forward by Labour lawmaker Margaret Beckett, was supported by 268 lawmakers and opposed by 295.

DEFEATED 292-191 G) Parliamentary Supremacy – Joanna Cherry
Says that if Britain has not ratified an exit deal within two days of the day it is due to leave the EU, the government should seek a further extension to the Article 50 negotiating period. If a Brexit delay has not been agreed by the day before exit day, the government should seek parliament’s approval for leaving without a deal and if that approval is not given, the government should revoke Article 50 to cancel Brexit.
This is an expanded, more detailed version of a proposal put forward by Cherry last week. That proposal was supported by 184 lawmakers and opposed by 293.

DOES THE GOVERNMENT HAVE TO ACCEPT THE RESULT?
The votes are not binding on the government, but Justice minister David Gauke said on Sunday that it would have to “consider very carefully the will of parliament.”

Asked if May would have to go back to Brussels and seek a customs union if parliament voted for it, Gauke said: “If parliament is voting overwhelmingly against leaving the European Union without a deal but is voting in favour of a softer Brexit, then I don’t think it is sustainable to say we will ignore parliament’s position and leave without a deal.”

Oliver Letwin, the Conservative lawmaker behind the process of votes, has previously said that if parliament succeeded in finding a majority for a way forward, he hoped the government would accept that outcome but if it did not, then lawmakers would bring forward legislation seeking to force it to do so.

He has set out plans for lawmakers to take control of parliamentary time again on April 3.