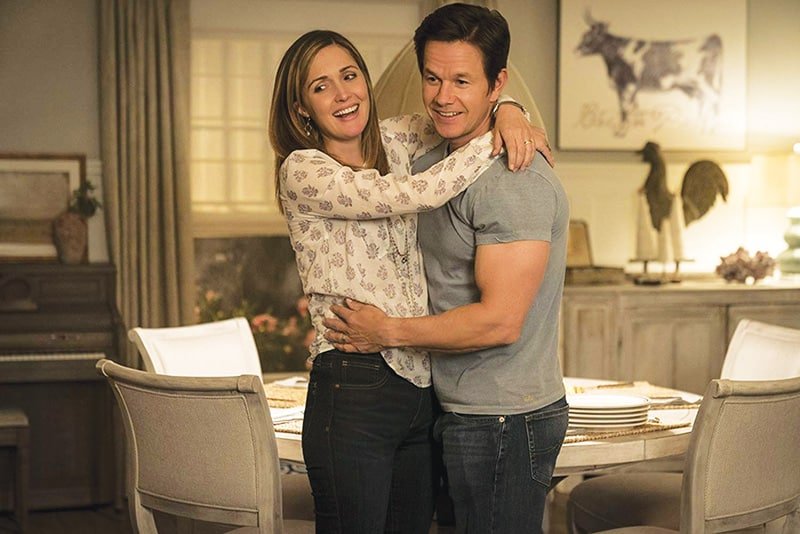 A sign on the wall reads ‘Choose to be a forever home’. The camera lingers on the sign, and indeed why shouldn’t it? The sign – on the wall of a care centre – is calling on people to become foster parents, and more people should become foster parents. There are too many children in care (at least in the States). The system is broken. Director Sean Anders is apparently a foster parent himself; good for him! None of this has much to do with Instant Family, which reduces the subject of fostering to a bad sitcom.

The subject isn’t new, even treated as comedy. I can think of at least one example, a light-hearted 1973 movie called Mixed Company which was also about a white couple becoming foster parents to a trio of ethnic-minority kids – though in this case the three kids are siblings, so they’re all from the same minority (Latino). Mixed Company is largely forgotten, with good reason (I watched it on CyBC years and years ago) – but at least the parents in that film were recognisable human beings, not manic wind-up toys like they are here. Anders used the same frantic style in Horrible Bosses 2 and Daddy’s Home – and both were funny in the same limited way, a case of screechy cartoons talking past each other. The cartoons are still there, but he’s now added sticky ‘family values’ and a semblance of a serious issue. The mix is indigestible.

Pete (Mark Wahlberg) and Ellie (Rose Byrne) seem like a nice enough couple – they run a successful business renovating old houses – but it turns out they have a problem: they can’t shut up. Their approach to an argument, or a challenge (anything, really), is to twitter on about it endlessly, talking over each other and repeating each other’s sentences. This is quite amusing the first couple of times, e.g. when Ellie mentions having kids and Pete gives her ‘a look’ – “It was a look” “A look?” “A look” “What look?” “A definite look”, etc etc – but becomes tedious when they actually foster the children, 15-year-old Lizzie (Isabela Moner) and her younger sibs Juan and Lita, and make heavy weather out of every little issue. Pete and Ellie overreact to everything. Sometimes it’s understandable, for instance when they beat up a creepy janitor who’s been sexting their daughter. Most of the time, they just look like idiots.

One recurring joke here is someone (usually Pete and Ellie) discussing someone else within hearing distance of that person, the joke being when the person comes over and says ‘I can hear you, you know’. Another recurring joke is husbands saying tactless, embarrassing things in public (as when Pete wonders if it’s too “white saviour”-ish to adopt non-white kids, or suggests it might be more effective to call foster children ‘rescue kids’, like they do with dogs), and their mortified wives muttering variations on “Stop talking”; dads are always the goofy ones in American sitcoms. The film is so harmless and lame, it’s almost sweet – but then, side-by-side with musical montages where the ‘instant family’ share tubs of ice-cream and play with water pistols, you hear talk of “crack babies” and abusive parents, and the whole thing suddenly seems wildly inadequate.

“Guess what? Things that matter are hard!” says another foster mum, urging our fragile heroes to keep going (there’s a ‘support group’ of fellow foster parents, who of course include a gay couple and a Christian couple; their raucous group sessions seemed especially grating, though I guess your mileage will vary) – but Instant Family doesn’t take the hint, making its own ‘things that matter’ seem fairly manageable. The little girl will initially only eat potato chips, and has a couple of screaming fits; her brother is scared and over-sensitive, but nothing a little TLC won’t cure. Both younger kids are cute from Day One, going “Ewww!” in unison when they see their new parents kissing. Lizzie is slightly trickier, being indeed a strong character, and she does betray Pete and Ellie’s trust at one point – but what self-respecting teen wouldn’t, faced with these two twits and their endless excitable yammering?

Instant Family is a film about a silly bourgeois couple who think foster parenting will be just like a sitcom – and turn out to be absolutely right. The film will surely work for some people. It’s warm and feelgood; it has a big heart. Yet there’s a depressingly infantilised quality (speaking of kids) to Anders’ approach, as though telling this story through actual characters would be too much reality for us; it fobs the audience off with comic ciphers in the way of a parent getting a toddler to eat their food by pretending the spoon is an aeroplane. So we have Pete trying to put out a kitchen fire by squirting it with ketchup, and Ellie getting stressed because teenage Lizzie wants her room painted black (imagine that!), and both of them treating family life with the panicky incomprehension of coked-up Martians. Moral of this sneaky social lesson: if these mugs can do it, you can too.

Uzoho the centre of attention again