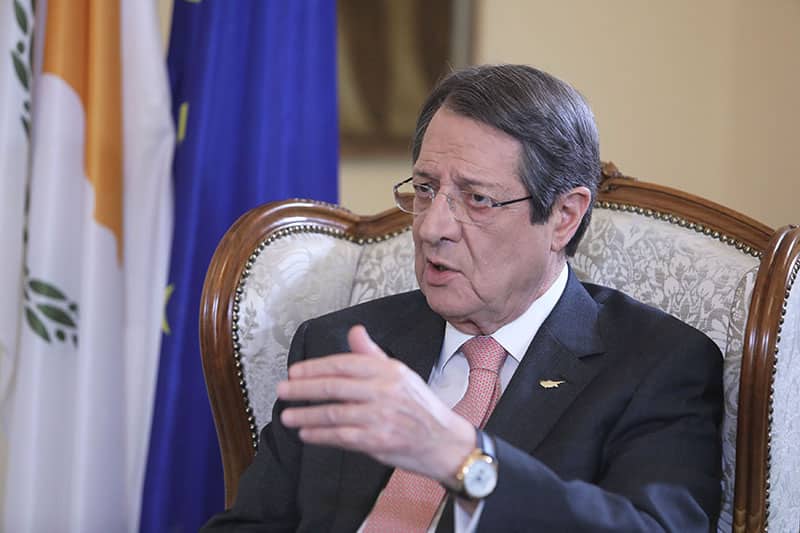 President Nicos Anastasiades said on Tuesday he hopes that during political consultations on the international aspects of the Cyprus problem between Turkey and Greece in Athens next week, Turkey’s attitude would create conditions for a solution to be reached.

He was replying to questions during an interview with the Cyprus News Agency.

Asked whether agreement was within reach, Anastasiades said that he could not predict “how close or far away we are if the Turkish side and the Turkish Cypriots insist on their positions, on political equality.

“For one side to insist to have the final word on all decisions means abolishing political equality and putting in place a system on the basis of which side will determine what decisions will be taken,” he said.
He shares Turkish Cypriot concerns on the possibility of the Greek Cypriot side taking advantage of its power, he added, but political equality means, among other things, having a positive vote but not on every decision.

“Where there is a possibility for the Greek Cypriot side to abuse its power by imposing decisions which would likely be detrimental to the Turkish Cypriot community,” he said, “there should be a protective shield”, adding however, that he did not see the reason to have such a provision for every decision. At the same time, he reiterated that an effective mechanism for resolving differences should be in place.

Turkish Cypriots should reciprocate by showing they understand Greek Cypriot concerns over the lack of functionality and the danger of the state collapsing the day after an agreement is reached, Anastasiades added “hence the insistence to become fully independent without guarantees, without intervention rights, without armies.”

Commenting on the April 12 meeting in Athens, he said: “Let us hope that Turkey’s stance will recognise what the UN Secretary General said in Crans-Montana about the anachronistic system of guarantees and the need to replace it with an effective mechanism with international participation and generally an attitude on Turkey’s part which will create the conditions to reach a solution of the Cyprus problem to the benefit of everyone.”

Asked about what steps Nicosia would take if by July – when Unficyp’s mandate renewal will be discussed again at Security-Council level – there has been no resumption of talks, he said: “We will not wait until July.”

“First and foremost, our effort is for the dialogue to resume on a healthy basis which will give us a prospect,” he added, saying how dangerous it would be for the peacekeeping force to withdraw from the island.

Commenting on Turkish threats in the island’s exclusive economic zone, the president said the government was making use of all means at their disposal and in accordance with international law such as protesting to the EU and the UN. “We turn to all directions, through our trilateral cooperation schemes,” he added. He also said Nicosia had chosen to engage powerful energy companies from powerful countries in its energy plans in order to mitigate any possible dangers.

Anastasiades also revealed that one of Cyprus’ objectives was to arrange a meeting between him and US President Donald Trump. He also announced he would visit China later in April to attend the One Belt One Road conference and he would be meeting President Xi Jinping.