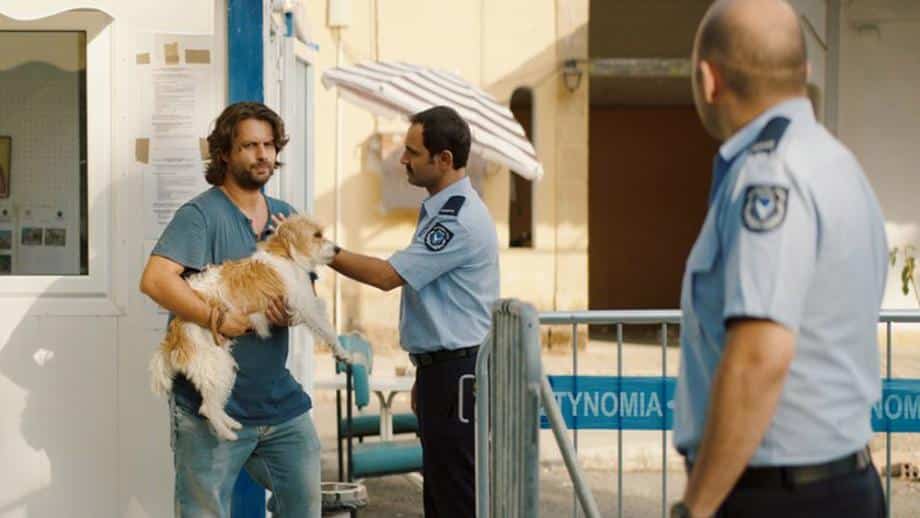 Adam Bousdoukos as Yiannis being told he cannot bring his dog, Hendrix, back over the green line after it escaped to northern Nicosia

The comedy Smuggling Hendrix has won accolades internationally, but the way it challenges the Cyprus problem narrative may unsettle audiences

Next Friday marks the Cyprus premiere of Smuggling Hendrix, a lively comedy by writer-director Marios Piperides which will open the Cyprus Film Days festival in Limassol. It then screens in Nicosia on Monday, April 15, also as part of Cyprus Film Days, and is due to open commercially next month.

Smuggling Hendrix is the rare Cypriot movie (albeit with German co-producers) to have attracted an audience outside Cyprus. It opens in Italian cinemas this week, then in Greece over the summer, in Germany in September, and is also available on HBO Eastern Europe and Amazon Prime in the US. It’s also been a roaring success on the festival circuit, having won Best International Narrative Feature (the top prize for non-American films) at the Tribeca festival in New York last year, among other accolades.

Yet the film is also likely to be controversial on home soil, a possibility Piperides himself acknowledges.

“I think the main issue that some people might have is identifying with the character of Hasan,” he says. “He’s a Turkish settler and, in the film, he comes off as a likeable character. So people actually identify with him – but it’s a strange feeling, because they’re not ‘supposed’ to like him.”

Hasan (played by Fatih Al) reluctantly agrees to help Yiannis, a Greek Cypriot (played without any Cypriot accent by Greek-German actor Adam Bousdoukos) whose dog Hendrix runs away to northern Nicosia, and has to be smuggled back south. Hasan is indeed a Turkish settler – and this is probably “the first time, in film or other media, that there is a face behind the settler, behind the numbers,” points out Piperides.

Both sides, Greek and Turkish Cypriots alike, tend to use the settlers as bargaining chips in our never-ending talks, treating them mostly as numbers – but “this is the first time that you actually see a person that has a family, has kids, has dreams, has hopes. And this is unsettling for some people”.

Piperides is an affable type, who doesn’t come across as a provocateur. His thin beard and fringe of hair are almost completely grey – but he’s not old, having turned 44 a few days ago. He was born in 1975, just a few months after the invasion. He’s lived his whole life in the shadow of a divided Cyprus, constantly hearing the same slogans, the same assumptions and, as he says, “the same narratives” – the most important narrative being the invisibility of ‘their’ side, its (admittedly illegal) existence negated by everything from the official use of ‘pseudo’ to the many Greek Cypriots who refuse to cross the checkpoints.

What’s most controversial about Smuggling Hendrix is perhaps that it complicates this narrative, being set mostly in the northern half of Nicosia (despite being shot almost entirely in the southern half) and giving voice to its inhabitants. Is there a danger that the film is normalising the situation?

Not at all, he replies. It’s not a question of normalising, simply a question of depicting the absurdity of what we in Cyprus have come to accept as ‘normal’ – and also a question of acknowledging a reality. “It’s been almost half a century now. As time passes, the problem becomes more complicated to solve – because we’re going into the third generation, and soon there’s going to be a fourth generation of settlers. They’re born here, they get married, they have children, their children have children.”

What do you say to those children, who’ve known no other country but Cyprus? “We can bury our head in the sand – but the reality is that these people are here.”

Fine; but Smuggling Hendrix is funded partly by the state. Why should the government give money to a film that some may object to?

“Again, this is about looking at how things are. As a filmmaker, this is what I see, this is what I depict – and it’s to the credit of the Ministry of Culture that they support all kinds of viewpoints, and being critical of mainstream narratives is extremely important.”

He points to the example of Israel, where the films funded by the Israeli Film Centre are often extremely critical of the state and its laws. This is healthy. Art is supposed to challenge, not just fall into line. “What politicians cannot say, you can say through art.”

But, for instance, a nationalist could plausibly say: ‘Make your art, by all means. Good luck to you. But why should I, as a taxpayer, have to fund a viewpoint I don’t agree with?’.

“But it’s not about agreeing,” replies Piperides. “As taxpayers, we all contribute to some things we agree with and some things we don’t agree with, that’s how democracy works.” Besides, he himself is also struggling with these questions. Making the film forced him out of his comfort zone – and that’s partly the purpose of art, to take you out of your comfort zone, especially with the conversation on the Cyprus problem having reached such a stalemate.

He wrote the script in 2015, long before Crans-Montana – but the situation was just as bleak four years ago. “What’s next?” he asks rhetorically, a question without any obvious answer. If Smuggling Hendrix can advance the conversation and help us in finding solutions, it’ll be doing everyone a favour.

So what does he actually expect to happen on Friday? Will there be trouble?

“I don’t think there will be trouble. I expect some people will maybe feel uncomfortable watching some scenes.” One thing’s for sure, he admits, “this is not a film that you watch it, then you leave the theatre and that’s it. I think there will be a discussion afterwards”. So much the better.

Turkey’s AK Party to seek recount of all Istanbul votes

Pakistan says it has intelligence of new Indian attack this month