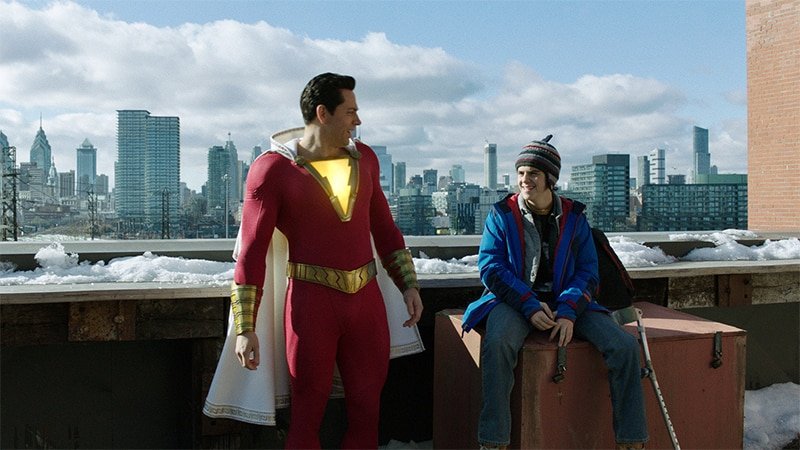 What do this week’s new releases – Shazam! and Pet Sematary – have in common? Both play Ramones songs over the end credits, and both take their cues from films made in the late 80s. Pet Sematary is officially a remake of the 1989 horror hit, based on the novel by Stephen King – and Shazam!, of course, is the superhero version of Big, the 1988 classic where an 11-year-old boy wishes he were ‘big’ and promptly turns into Tom Hanks. There’s even a reference to the foot-piano scene from that film, if it weren’t already obvious.

All superhero movies are versions of Big, in a way; they’re all manifesting the childish dream of being in a powerful body with super-strength, or laser eyes or whatever. The difference here is the lack of self-awareness, viz. that when 14-year-old Billy Batson (Asher Angel) turns into Shazam (Zachary Levi) he’s still, in fact, only 14. There’s a bit of Deadpool in this clueless superhero, and a bit of Spider-Man in a teen learning to use his new powers (a.k.a. negotiating the new world of adulthood). Shazam has a rather cheesy mythos – Billy transforms into his alter ego, and back again, by uttering the magic word ‘Shazam!’ – and even DC Comics, purveyor of a gloomier sensibility than rivals Marvel, can’t be too dark in this case. The film is played for comedy, and all the better for it.

Much of it is actually joyous – and surprisingly light on action, focusing partly on Shazam’s battle with the inevitable supervillain (Dr. Silvana, played by Mark Strong) but also on Billy’s relationships with his new foster family, including excitable Freddy (Jack Dylan Grazer). Freddy is spilling-over, teenage-geek energy personified, with a brain full of useless information – did you know the ancient Romans used to brush their teeth with urine? – and a mouth guaranteed to raise the hackles of school bullies and authority figures; he makes Spider-Man’s friend in Spider-Man: Homecoming (the one who asked “Do you lay eggs? Can you summon an army of spiders?”) look like a model of decorum. When Freddy and Billy/Shazam make YouTube videos to figure out his superpowers, or attempt to fight crime like a superhero is supposed to do, or just try to come up with a cool name – ‘Thundercrack’? ‘Power Boy’? ‘Mr. Philadelphia’? – the film is at its most irresistible.

There’s a moral lesson to be learned, of course. (The same one Spider-Man learned: with great power comes great responsibility.) The film is scaled to the level of kids’ fantasy, with slavering CGI monsters – representing the Seven Deadly Sins, no less – and a portentous wizard in a secret cave providing Billy with his superpowers, his solemn entreaties taken with a large pinch of snark. “Lay your hands on my staff,” instructs the wizard; “Gross!” protests our hero. “Say my name, so my powers can flow through you!”; “I don’t know your name, sir. We just met.” Even with half the Avengers wiped out last year (presumably to be resurrected this year), the superhero genre’s clearly tending more and more to irreverent comedy; for this non-fanboy, that can only be a good thing.

The tone wavers slightly. Director David F. Sandberg is an odd choice, having come from horror (he made Lights Out and Annabelle: Creation), and a slightly too-sadistic sensibility shows through occasionally; the scene where Silvana and his demons murder his entire family seems to belong in a different movie (a car accident scored to a Christmas carol also flirts with tastelessness). Mostly, however, Shazam! is great fun – as well as being a more touching film about foster families than last week’s Instant Family. Billy’s new foster siblings are a mixed bunch; Freddy’s disabled (Grazer’s performance is great because it includes a kernel of disappointment that the real world is so much worse than the superhero one), Darla is clingy, little Eugene practically lives on the internet, the parents are game but a little lame – yet the film pays attention to the life of this improvised household, way more than it needs to for plot purposes. By the end, when rebellious Billy decides to stay on (spoiler!), it’s lump-in-throat time.

Levi, it must be said, is no Tom Hanks, coming off a little too manic (especially compared to his kid-actor counterpart) – but his joy is infectious, being the joy of a child as opposed to an arrested adolescent; Shazam! never emits that rather stale air of being made by people who have all the original comics at home in their mancave. Billy uses his powers – shooting electrical bolts – to charge random people’s phones and extract Dr. Peppers from a vending machine, while Freddy makes videos and babbles excitably – and meanwhile the film also offers random pleasures like a rather camp gentleman who comes up to Shazam in the subway to “applaud your [fashion] choices”, or a scene where a lot of doors suddenly appear out of nowhere. “So many doors,” says our hero – and opens one of them, to reveal three alligators playing poker! It’s enough to make you wish you were 14 again.

School for the Blind ‘not closing’, parents association says