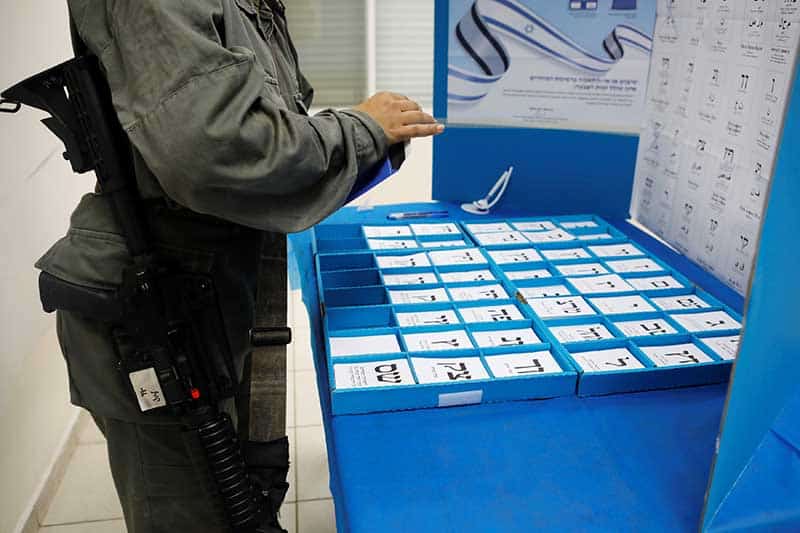 An Israeli border policewoman stands behind a mobile voting booth a day before polling stations open in the rest of Israel, at a base in Beit Horon settlement in the Israeli-occupied West Bank April 8, 2019. REUTERS/Nir Elias

JERUSALEM, April 7 (Reuters) – Israelis vote in a national election on Tuesday. Polls show that veteran Prime Minister Benjamin Netanyahu, seeking a fifth term in office, is best positioned in the tight race to win and head the next government. His decade-long dominance of Israeli politics has been the biggest issue of the campaign.

WHAT ARE THE POLLS SHOWING?
Recent polls have shown that the right-wing bloc led by Netanyahu will win a majority in the Knesset. But they also show a new centrist party headed by a popular former general emerging as the largest faction in parliament. Surveys detect many undecided voters who could swing the election either way.

HOW DOES THE ISRAELI ELECTION WORK?

The 120 Knesset seats are allocated by proportional representation to party lists. In order to win seats in the Knesset, a party must pass a threshold of at least 3.25 percent of the national vote, equivalent to 4 seats.

No single party has ever won an outright majority in the Knesset, making coalition governments the norm. After the election and consultations with party leaders, Israel’s president ask the candidate whom he judges has the best chance of forming a coalition to try and put together a government. That is usually the person heading the largest party, but not necessarily. That candidate has 28 days to form a government, with a possible 14-day extension. If he or she fails then the president tasks a different candidate with the job.

In the 2019 election, about 5.8 million Israelis are eligible to vote, according to the Israeli statistics bureau.

WHAT PARTIES HAVE BEST CHANCE OF WINNING KNESSET SEATS?

The biggest right-wing party in Israel is predicted to win about 29 seats. Likud champions tough security policies when it comes to Iran, Syria and the Israeli-Palestinian conflict. Many of its members oppose the creation of a Palestinian state. Netanyahu, in a last-minute election promise, said he would annex Israeli settlements in the occupied West Bank if he wins another term. In the run-up to the vote, Likud has rallied around Netanyahu, who is facing possible indictment in three corruption cases in which he has denied any wrongdoing.

Gantz has emerged as a serious rival to Netanyahu. His party is forecast to win 31 seats. Gantz is a popular former armed forces chief and a political newcomer. He joined forces with the right-wing Moshe Yaalon, a former defence minister, and centre-left former finance minister Yair Lapid to form the new centrist Blue and White party. Gantz has called for pursuing peace with the Palestinians while maintaining Israeli security interests. He has signalled he would make territorial concessions toward the Palestinians but has also sidestepped the question of Palestinian statehood. Gantz has vowed clean government, while at the same time giving mixed signals over whether he would join a Netanyahu-led coalition.

Opinion polls have shown left-wing Labour, which governed Israel for decades, plummeting to 10 seats in the election from its current 18. Its campaign has stressed social and economic reform, as well as pursuing peace and a two-state solution with the Palestinians.

THE NEW RIGHT headed by Naftali Bennett and Ayelet Shaked

Bennett, Israel’s education minister, and Justice Minister Shaked split from Israel’s national-religious faction to form a new far-right party that would appeal to more secular constituents. Polls presently show them winning 6 seats. Bennett calls for annexing most of the West Bank, offering autonomy to Palestinians. Shaked has vowed to “reign in” Israel’s supreme court which she has branded as too liberal and interventionist.

Predicted to win 7 seats, Israel’s national-religious party is the most prominent political representative of Israeli settlers in the West Bank. It repudiates the idea of a Palestinian state and stresses Israel’s biblical and religious connections to land Palestinians seek for a state. The union includes Jewish Power, an ultra-nationalist religious party that includes disciples of the late Rabbi Meir Kahane who advocated the “transfer” of Palestinians to neighbouring Arab countries and a ban on intermarriage between Jews and Arabs.

An ultra-nationalist religious party that has surged in the polls in recent weeks and is forecast to take around 6 seats – partly over its support for legalising marijuana use. Zehut calls for the voluntary transfer of Palestinians to neighbouring Arab states and bills itself as a libertarian force, pushing for a free market economy.

A former Likud member, Kahlon has partly come through on his pledge to halt soaring housing prices but has fallen short on dramatically reducing overall living costs. His party casts itself as moderate right-wing and has focused its campaign on socio-economic issues. Kulanu is expected to win only half of its current 10 seats.

The far-right party, which has counted on the support of immigrants from the former Soviet Union, has been teetering on the electoral threshold in recent polls. Moldovan-born Lieberman is a former defence minister whose policies include trading Arab towns in Israel to any future Palestinian state for territory in the West Bank where Jewish settlements have been built. He also wants to make loyalty to the state a condition for citizenship.

UTJ represents ultra-Orthodox Jews, or Haredim, of European origin and is seen winning about 6-7 seats in the Knesset. Successive coalition governments have had to rely on support from ultra-Orthodox parties, which traditionally put their sectoral demands above larger issues like security and the Israeli-Palestinian conflict. UTJ is primarily concerned with safeguarding state benefits for Hared men who devote themselves to full-time religious study and do not serve in the conscript military or work.

Allied with UTJ, SHAS (an acronym for Union of Sephardic Torah Observers) has like UTJ been an almost permanent fixture in successive governments and represents Haredi Jews of Middle Eastern origin. According to opinion polls, it will win 5-6 seats in parliament.

Predicted to take 7-8 seats in the Knesset, the socialist Jewish-Arab party draws most of its voters from Israel’s 20 percent Arab minority. It advocates an Arab-Jewish alliance to fight discrimination, racism and social inequality in Israel. Arab parties have never joined governing coalitions in Israel.

Predicted to win 4 seats, Raam-Balad’s leaders are a mix of Islamist and Arab nationalists. It describes itself as a democratic movement opposed to Israel’s occupation of Palestinian territory.

Predicted to win 5-6 seats in the Knesset, the left-wing party has not been part of a coalition government in the past two decades. Popular with liberal middle-class Israelis, the party advocates a two-state solution with the Palestinians.