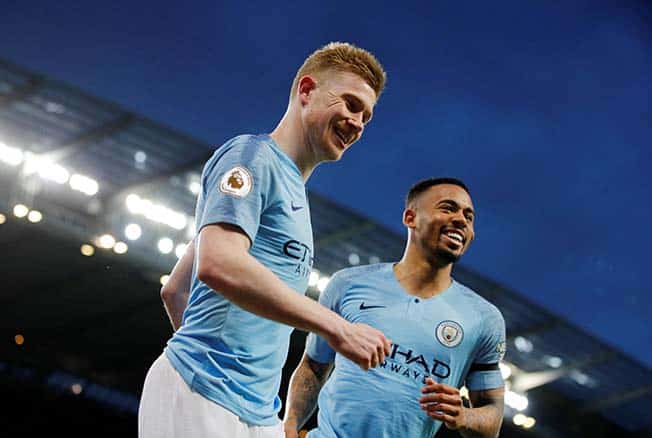 The London club have been energised by completing their long-awaited move into their new home in the past week.

Spurs are hoping the feelgood factor continues as they host quadruple-chasing City in the quarter-finals of the European competition on Tuesday but De Bruyne says it makes no difference.

“Everybody talks about the stadium like it’s something special. Everybody has a stadium, everybody has supporters.

“They’ll be up for it, they’ll probably be a little bit more excited, but in the end it’s a stadium with supporters. I don’t think there will be any difference.

City are bidding to go further than they did last season, when they were knocked out at the quarter-final stage by another Premier League rival in Liverpool.

De Bruyne does not believe there are any lessons to be learnt from last year’s experience, however.

“Nothing,” said the 27-year-old. “Different team, different year, different players. Last year we had a great season but we didn’t make it beyond the quarter-finals and that’s it.”

City go into the game fresh from securing a place in the FA Cup final – their second domestic final of the year – with victory over Brighton at Wembley on Saturday. With Pep Guardiola’s men still controlling their Premier League title destiny, the quadruple dream remains alive.

De Bruyne said: “There’s no point thinking about it. You know how heavy the schedule is? I think people underestimate how the fixtures come that quickly.

“We don’t even have time to have a rest ourselves so how can we think about what’s going to happen in four weeks? We’re just going to play Tuesday and then hopefully play a good game.”

City have remained in London to prepare for the Spurs encounter. One advantage the hosts will have had is the benefit of a free weekend prior to the first leg.

City boss Guardiola said: “It’s really good but we don’t have too much time to tell ourselves it’s so good because the only focus right now is: don’t drink one drop of beer or alcohol, rest, eat good, regeneration and prepare for the game against one of the best teams in all terms in the Premier League and Europe, when they had six days to prepare and we had two-and-a-half.”

City have won 22 of their last 23 games in all competitions but they remain in a tight tussle for the Premier League crown with Liverpool.

“Of course, if we want to be in contention in all competitions you have to make these kind of numbers,” Guardiola said.