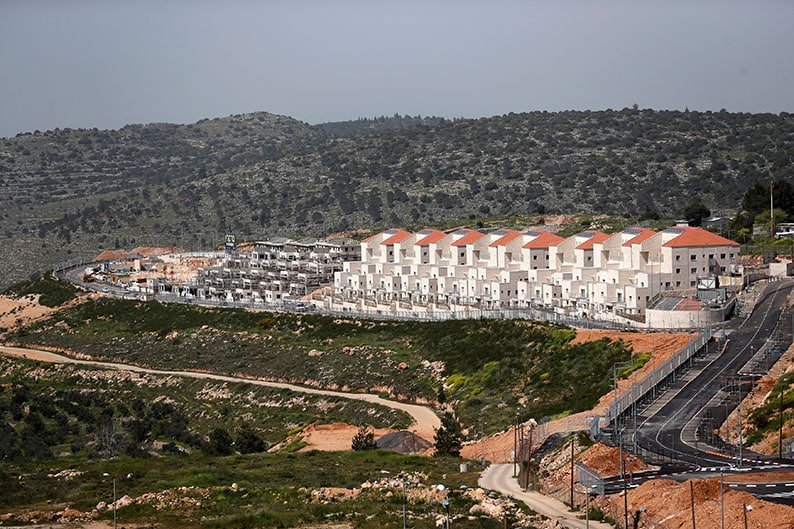 Around 20 per cent of the people in the West Bank and the adjacent parts of East Jerusalem, conquered at the same time, are now Jewish settlers but they control 42 per cent of the land

IT SHOULDN’T have been a surprise when Prime Minister Binyamin Netanyahu said on Saturday, three days before the Israeli election, that he is going to annex all the Jewish settlements in the occupied West Bank. After all, every other member of his Likud Party in the Israeli parliament (28 out of 29) had already said they wanted to do that. Yet it did come as a surprise.

Netanyahu had avoided saying it previously because as head of government his statement would have made it official policy, and according to international law annexing conquered territory is illegal. (Israel seized the West Bank in the 1967 war, and has occupied it ever since.) The traditional Israeli policy has been to colonise as much of the territory as it can with Jewish settlers, but to insist that it was all open to negotiation in a peace settlement.

It never meant that, of course. Around 20 per cent of the people in the West Bank and the adjacent parts of East Jerusalem, conquered at the same time, are now Jewish settlers (600,000 colonists among 2.4 million Palestinians), but they control 42 per cent of the land. You don’t make that kind of investment if you’re really planning to give the land back to the Palestinians in the future.

But leaving the legal status of the Jewish settlements open actually enables them to go on expanding, whereas annexing the land the settlers now hold would implicitly recognise that the rest of the land really still belongs to the Palestinians, and stop the settlers from grabbing even more of it. Moreover, leaving the question open lets Israel’s Western allies and supporters ignore its actions.

Even Western media dodge the issue, using slippery formulas like the BBC’s famous line, which appears in almost every piece it does about the occupied territories: “The [Jewish] settlements are illegal under international law, though Israel disputes this.” It is the exact legal and moral equivalent of saying that

“Russia’s annexation of Crimea is illegal under international law, though Russia disputes this,” but in practice it lets the Israelis off the hook.

So why did Netanyahu change the policy now? The election, obviously. In response to a (probably planted) question from the audience at Saturday’s rally, he said: “You are asking whether we are moving on to the next stage – the answer is yes, we will move to the next stage. I am going to extend [Israeli] sovereignty and I don’t distinguish between settlement blocs and the isolated settlements.”

‘And the isolated settlements’ is an interesting phrase. Ariel Sharon’s famous exhortation in 1998 – “Everybody has to move; run and grab as many hilltops as they can to enlarge the settlements, because everything we take now will stay ours. Everything we don’t grab will go to them” – had concrete effects.

‘Unauthorised’ Jewish settlements – often no more than a couple of trailers, a lot of razor wire, a small arsenal of weapons and an Israeli flag – sprang up on a lot of hilltops in the West Bank. If Netanyahu includes them and the roads that connect them in his ‘annexation’, it will be a final land grab that probably brings the portion of the West Bank under Israeli sovereignty above 50%.

Netanyahu is doing this now because his re-election campaign was running into a bit of trouble. He is under indictment on corruption charges, and his Likud party, which used to be seen as hard right, has ended up looking ‘soft right’ without ever changing its policies. It’s the centre of gravity in Israeli politics that has moved, with several right-wing parties following an ever harder line than Likud.

Likud will never form a government on its own; it would be doing well to win a quarter of the 120 seats in the Knesset (parliament). The country’s electoral system of proportional representation means all governments must be coalition governments, and Netanyahu’s potential coalition partners after the election are almost all further to the right than Likud.

To compete with them for votes during the election, and to draw them into a new coalition afterwards, requires Netanyahu to look ruthless and ultra-nationalist himself, and he has shown no reluctance to play that role. He also knows that his good friend Donald Trump will give him cover internationally when he annexes the West Bank.

Trump has already moved the US embassy to Jerusalem, an implicit endorsement of Israel’s annexation of the Arab-majority east of the city after it was captured in the 1967 war. More recently he has formally recognised the illegal Israeli annexation of the Golan Heights, a part of Syria also conquered in that war and now a territory where Israeli settlers make up half the population.

So would Trump also recognise an Israeli annexation of half the West Bank? Why not? Netanyahu might as well exploit Trump’s political strategy at home, which includes accusing the Democratic Party of being ‘anti-Semitic’, to get US approval of Israeli expansion while he is still in office. He might be gone in nineteen months.

Irregularities in use of TC properties continues says mayor

Our View:  When will the UN give up this futile process?

Coronavirus: Stuck in a permanent ‘state of emergency’

Disy leader is right to focus on the future

Our View: EastMed pipeline is no longer an option, not even in theory

Tales from the Coffeeshop: Our foreign ministry is a great producer of Paphite mega opportunists