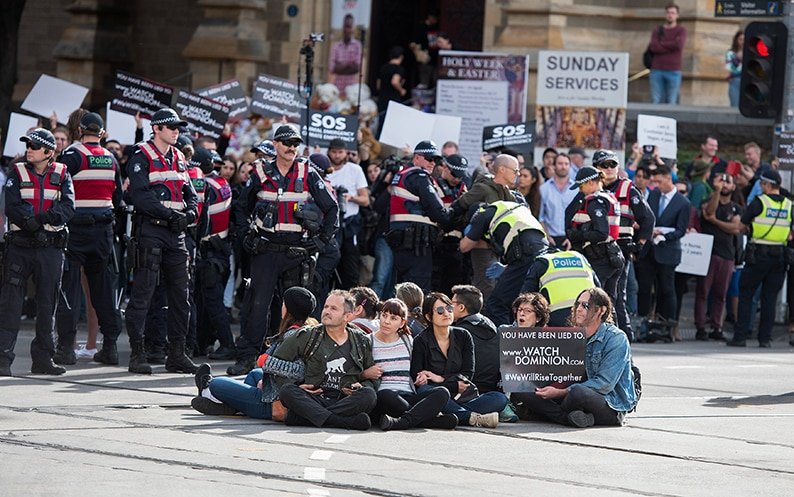 Police move in on animal rights protesters who had blocked the intersections of Flinders and Swanston Street, in Melbourne

Australia’s government proposed on Wednesday to criminalise some actions of animal rights protesters after activists blocked traffic in Melbourne and stormed farms and abattoirs this week to protest factory farming.

The new law proposed by Prime Minister Scott Morrison is unusual, legal experts say, because it appears to be a specific response to the actions of a vegan activist group, AussieFarms.

The group has posted an interactive map online of animal businesses, including farms, zoos and horse racing tracks, to promote a documentary film that calls for a ban on slaughterhouses.

Under the new law, people who encourage trespassers by posting the location of an agricultural business on the Internet could face up to a year in prison if found guilty, the government said.

“When they are using people’s personal information, details about their homes, it’s not just their farm, it’s their home, it’s where their kids live and grow up,” Morrison told reporters in the rural state of Tasmania.

“They are being targeted in the most mercenary way by an organisation that can only think of itself and not think to the real damage that is being done to the livelihoods of these hard-working Australians,” he added.

Australia is due to hold an election in May and most polls predict Morrison will lose, partly due to a drift of rural voters to other conservative parties.

Traffic stopped for an hour in central Melbourne on Monday when about 100 protesters waved signs to promote the AussieFarms documentary, Dominion, which used drones and undercover footage to film feedlots and saleyards.

It was part of a wave of action in three states, where activists targeted abattoirs in the middle of the night and at some farms chained themselves to equipment.

Hugh de Kretser, executive director of the Human Rights Law Centre, said there were laws in place that limited the actions of environmental campaigners, including a ban on trespassing.

“There’s a suite of powers available to police and law enforcement agencies to deal with trespass and obstruction of traffic and the like,” de Kretser told Reuters.

“Any attempts to further limit protest rights need to be very carefully scrutinised to make sure any penalty is not crushing, and the scope of any offence is not disproportionate to the conduct they’re trying to prevent,” he added.

Chris Delforce, the director of Dominion, said he would rather go to jail than take down the group’s website.

“All we’re trying to do is enforce transparency on these industries,” he told Reuters by telephone. “Whatever happens to me cannot compare to what’s happening to animals.”

Cash handouts worth €5m a year for 20,000 mountain residents