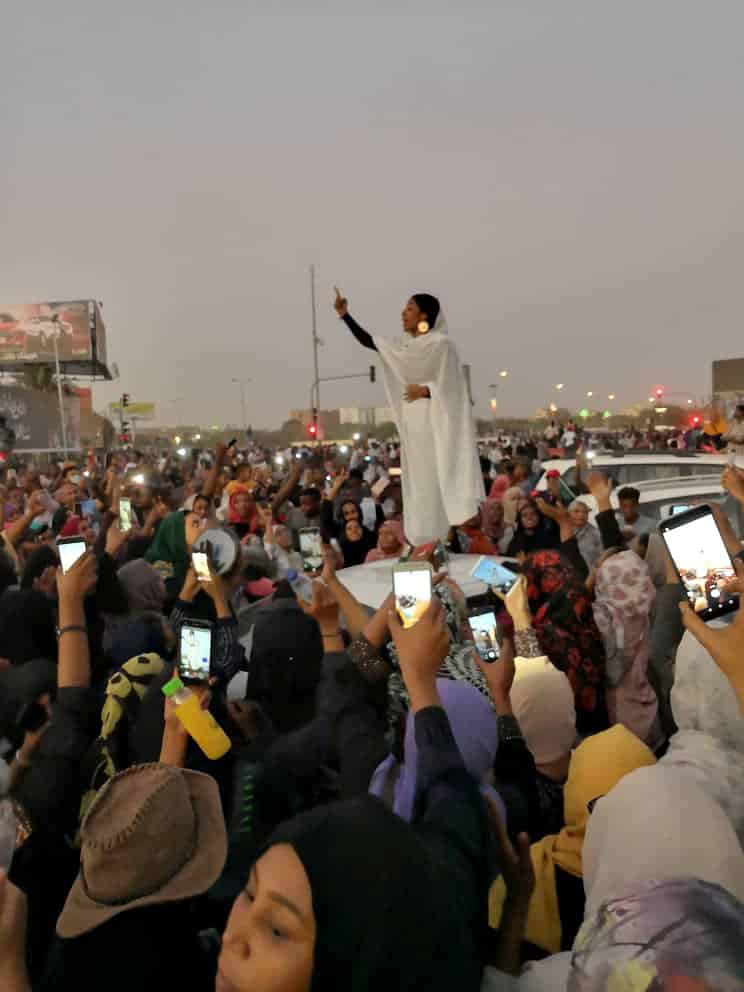 A Sudanese woman gestures during a protest demanding Sudanese President Omar Al-Bashir to step down along a bridge in Khartoum, Sudan April 8, 2019, in this still image taken from a social media video obtained on April 9, 2019. Courtesy Lana H. Haroun/via REUTERS

Eleven people were killed in the Sudanese capital Khartoum on Tuesday, including six members of “state forces”, the government’s spokesman said on Wednesday, as protesters pushed for an end to President Omar al-Bashir’s 30-year rule.

But government soldiers guarding the compound came out both times to protect the demonstrators, firing shots in the air and deploying troops around the area.

The protests are the most sustained challenge Bashir has faced in his three decades in power.

The Defence Ministry is in a compound that also houses Bashir’s residence and the NISS headquarters.

The government spokesman and Information Minister Hassan Ismail said the Khartoum state police chief had delivered a report stating that 11 people had died in “incidents yesterday (Tuesday), including six members of the regular forces”. He gave no further details on how they died.

Ismail also quoted the police chief as saying the authorities had foiled a “criminal plot” to burn down some police stations in some parts of the capital.

NISS warned in a statement that it had detected “negative developments” towards vandalism, theft and terrorising innocent people and said it was ready to act.

“The service calls on honourable citizens to be careful of attempts to drag the country towards a complete security breakdown,” the statement said.

It added that it was able to “rein in the unruly elements through good advice or by force within the limits of the law”.

The head of the main opposition Umma Party, Sadiq al-Mahdi, said on Tuesday that around 20 people have been killed and dozens wounded in dawn attacks on the sit-in outside the defence ministry since it began on Saturday.

Soldiers were heavily deployed around a sit-in outside the Defence Ministry on Wednesday, as several thousand protesters danced, sang and chanted slogans calling on Bashir to step down.

The demonstrators have been camped outside the compound since Saturday in an escalation of protests that have shaken Sudan since December.

Sudan’s Health Ministry reported that Khartoum hospitals had treated 72 cases of people suffering from tear gas and 16 minor injuries. First aid vehicles were stationed near the protest site to deal with emergency cases, it said.

There were no reports of attempts to disperse the protests on Wednesday. The sit-in area had expanded slightly, with hundreds of people entering and leaving despite temperatures rising above 40 Celsius (104 Fahrenheit), a Reuters witness said. Some people blocked streets to the east of the compound with stones.

Protesters chanted “Fall, that’s all!”, “The people want to build a new Sudan”, and “Our army protects us”.

Military trucks and troops were deployed around the compound, stopping cars from entering the area. Police and NISS forces appeared not to be present.

“With the army’s presence, we feel safe. The army is protecting us and we will continue the sit-in until the regime falls,” said Ayman Abdullah, a 23-year-old engineering graduate taking part in the sit-in.

Videos posted by the Sudanese Professionals’ Association, the main protest organiser, and others on social media showed demonstrators dancing, singing and chanting slogans.

A video shared by the opposition Sudanese Congress Party showed a large group of protesters marching towards the sit-in and cheering with a massive Sudanese flag draped over them.

Since Dec. 19, Sudan has been rocked by persistent protests sparked by the government’s attempt to raise the price of bread, and an economic crisis including fuel and cash shortages.

Opposition figures have called for the military to help negotiate an end to Bashir’s nearly three decades in power and a transition to democracy.