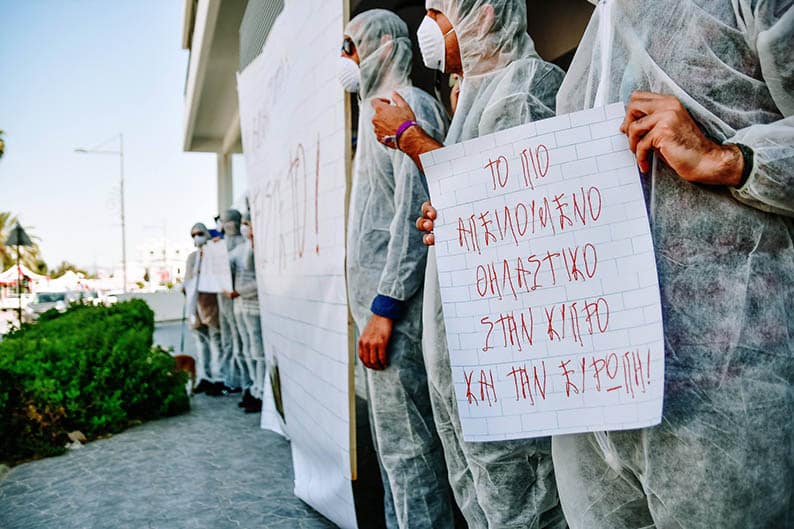 The activists, dressed in white overalls to resemble seals, blocked the entrance with a large banner that read “Haven’t done your homework again? Shut it down!” and held other signs saying “They didn’t see, they didn’t hear, they didn’t know” and “You haven’t understood anything”.

The entrance of the department of environment was symbolically blocked on Friday by a group of 10 activists to protest against the department’s continuing authorisation of construction at the Peyia sea caves, home to the Mediterranean monk seal, the most endangered marine mammal in Europe.

The activists, dressed in white overalls to resemble seals, blocked the entrance with a large banner that read “Haven’t done your homework again? Shut it down!” and held other signs saying “They didn’t see, they didn’t hear, they didn’t know” and “You haven’t understood anything”.

In a statement released by the two activist groups that took part in the action, the Initiative for the Protection of the Natural Coastline and Save Akamas/Save Cyprus, the groups note that the spontaneous demonstration was held one day after the publication by the environmental department of the appropriate assessment (AA) study, which was requested by the ministers of interior and agriculture on March 22, in view of evaluating the impact of the authorised construction projects on the natural habitats and protected species of the Peyia sea caves on the Akamas Peninsula.

According to the AA study, while new construction projects are in the pipeline, “the activities of the existing construction appear to already affect the now downgraded types of habitats, either due to arbitrary interventions beyond the boundaries of their plots or through the planting and spreading of foreign invasive species or through uncontrolled movement (with or without a vehicle).”

The study urged the authorities to “control all interventions and construction developments, especially within the unit that falls into the Natura 2000 network, and they will have to ensure the restoration of the natural environment of the area.”

The main threats faced by the endangered species is the increased human activity in the area, which degrade the seal’s biotope. The study noted that in terms of the existing construction in the area, due to the altitude difference with respect to the sea level, they do not significantly impact the species, though an exception to this is an operating café-restaurant, which causes major disturbance in one of the most important refuge areas of the monk seal.

Between March 2017 and March 2018, the groups said, the environmental department gave the green light for two developments projects in the sea caves area, just 60 metres from the sea. One project involves the construction of 53 holiday homes, each with a swimming pool and three biological sewage treatment plants, and the other involves a five-star hotel, eight storeys tall and containing 168 rooms.

A third green light was given by the department for the construction of six holiday homes with a swimming pool each and one biological sewage treatment plant, approximately 30 metres from the sea.

The groups added that an additional authorisation was given by the environmental department in March, to two construction applications submitted by a private development company for the raising of 27 homes with swimming pools, reception premises, a private road network and a tertiary wastewater treatment plant, 60 metres from the sea.

In contrast to the above, the statement handed by the group to a representative of the department’s director’s office said, the Convention for the Protection of the Marine Environment and the Coastal Region of the Mediterranean (Barcelona Convention) provides that all Mediterranean states should establish a coastal zone of at least 100 metres from the sea, where construction is prohibited.

The Barcelona Convention also provides that Mediterranean states must adopt even more stringent measures to protect marine habitats harboring rare and endangered species of wildlife with high conservation value, as well as valuable coastal landscapes and geomorphologies such as rocky shores and sea caves.

The Barcelona Convention was implemented by the European Union in March 2011, the groups said, however as shown by a publication providing an overview of the implementation of the EU’s environmental policy in Cyprus, updated on 4 April, the Republic of Cyprus has yet to sign and ratify the Convention.

The two groups called on the ministers of interior and agriculture to abolish the current “outdated legislation on the protection of beaches”, and to harmonise the Republic’s legislation with the Barcelona Convention, whereby a coastal and no-construction zone of a width of at least 100 metres will have to be defined, while additional measures for the protection of ecosystems and remarkable landscapes across the island’s coasts will have to be introduced.