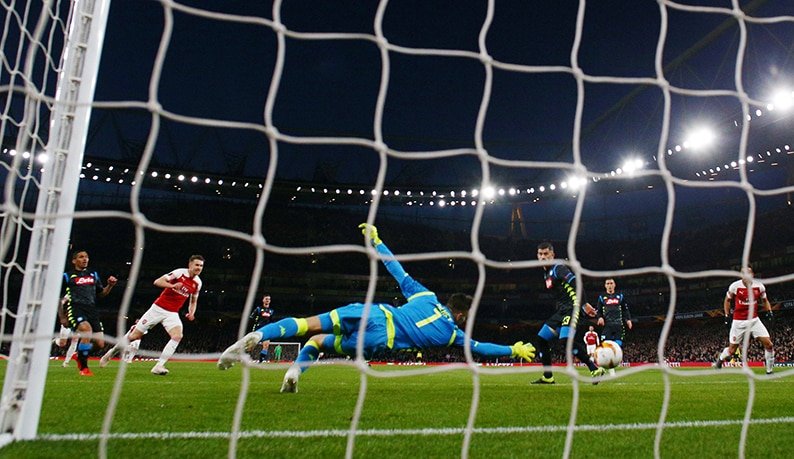 Arsenal took control of their Europa League quarter-final tie with Napoli as they outclassed their Italian opponents to secure a first-leg victory.

The Gunners extended their fine run of home form, this their 15th win from the last 16 games at the Emirates Stadium, as an Aaron Ramsey strike and a Kalidou Koulibaly own goal gave them a 2-0 victory to take to Naples next week.

Gunners boss Unai Emery had admitted on the eve of the game that he knew his team needed to win this first leg, given the stark contrast of their away form when compared to the near-perfect run at home.

They have lost both away knockout ties in this season’s Europa League to BATE Borisov and Rennes, two teams not considered as strong as Napoli – who sit second in Serie A.

Arsenal managed to turn both of those ties around when back in north London but this time they need to defend an advantage as they look to reach the semi-finals for the second year in a row.

The hosts started well and enjoyed plenty of possession as both Ramsey and Ainsley Maitland-Niles saw efforts blocked by Koulibaly as they pushed for an early goal.

Emery’s side made their good start count as Ramsey opened the scoring following a flowing move, latching onto a Maitland-Niles pass after good work by Mesut Ozil and Alexandre Lacazette.

The lead was doubled 11 minutes later as Lucas Torreira had the wherewithal to steal possession from Fabian Ruiz and charge at the Napoli goal before his weak shot was diverted past goalkeeper Alex Meret off the leg of Koulibaly.

Arsenal continued to create chances, Pierre-Emerick Aubameyang twice drawing saves off of Meret as the first half wore on, although fit-again captain Lorenzo Insigne passed up a fine opportunity to half the deficit as he blazed over before the interval.

The visitors responded to their poor first-half showing as they attacked from the off after the break, Insigne tucking away a chance only to be correctly flagged offside before Koulibaly saw a header tipped over by Petr Cech.

Arsenal were still creating chances of their own and – following a short-corner routine – Ramsey stung the palms of Meret before Nacho Monreal headed the resulting corner over the crossbar.

With the game more end-to-end than in the first 45 minutes, Dries Mertens failed to connect with a header after Insigne played him in over the top of the Arsenal defence.

With Napoli coming more and more into the game, Emery responded by replacing Ozil and Lacazette with Alex Iwobi and Henrikh Mkhitaryan for the final quarter of the contest.

Iwobi was involved immediately, starting a counter-attack which resulted in Maitland-Niles drawing another save out of Meret following a marauding run from Sead Kolasinac.

Napoli then missed their best chance of the night as Piotr Zielinski could only send Insigne’s low cross over Petr Cech’s crossbar from close-range.

Ramsey was next to spurn a marvellous opportunity as he spooned Mkhitaryan’s cross well over the bar after being picked out free inside the Napoli box, with Aubameyang hitting the side-netting late on.

The visitors attacked in the dying stages in an attempt to get an away goal but Arsenalstood firm and head to the San Paolo Stadium as the favourites to advance to the last four.

Our View: Clubs’ lack of funds is the root cause of match-fixing