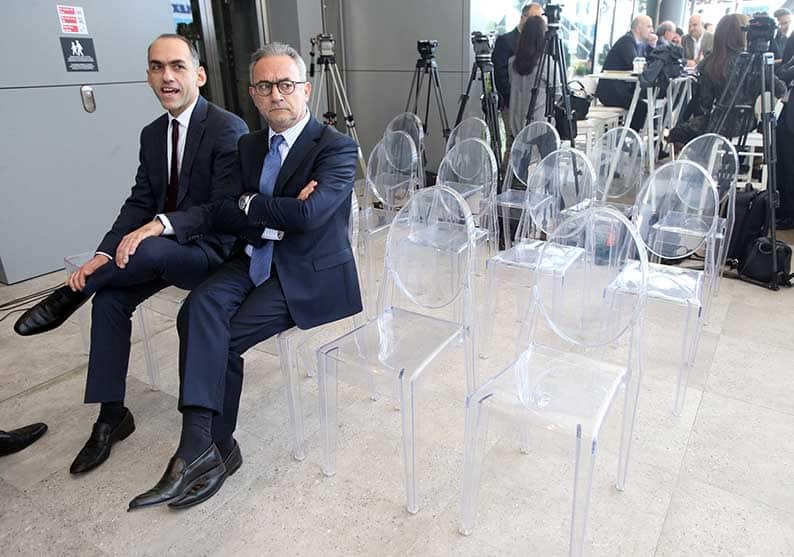 Following a stormy debate, parliament on Friday passed a resolution by majority vote calling on the finance minister to resign over the demise of the co-op bank or be dismissed by the president.

The non-binding motion, passed with the votes of opposition parties, 32 to 17, also urged the attorney-general to investigate the collapse and lead those responsible to justice.

“Beyond the collective responsibilities of the government, the main causes of the co-op bank’s collapse were the personal choices and omissions of the finance minister both in drafting a strategy and the selection of its leadership,” the resolution said.

It called on Finance Minister Harris Georgiades to resign immediately or be dismissed by the president.

The resolution is based on the findings of a probe into the lender’s collapse, which assigned most of the blame on Georgiades. The report also recommended the investigation into possible criminal offences by former CEO Nicolas Hadjiyiannis and other executives.

“The political responsibility burdens the president and his government who knew exactly what the condition of the co-operative bank was after the well-timed and stern warnings of the European institutions. Instead of acting on the warnings, they kept them under wraps and ignored them and through their decisions, actions, omissions, and lack of political will to find solutions, they failed to keep the co-op bank on a sustainable path.”

As a result, the motion said, the bank was led to collapse and sold to a private bank in a “predetermined sale process” in what was a one-sided and bad deal for taxpayers.

Georgiades dismissed calls to resign, arguing that it was the best solution under the circumstances. The co-op bank essentially collapsed under the weight of some €7bn in bad debts, which had been amassed before 2013, when the lender was nationalised.

President Nicos Anastasiades has provided full cover for his minister, who did announce he was stepping down by the end of the year but not because of the co-op.

“The opposition has a right to its views, and of course the president has a right to exercise his constitutional rights,” Anastasiades said on Friday.

A similar resolution had been passed by parliament in November 2011 asking for the resignation of then president Demetris Christofias following a deadly explosion at a naval base.

The blast, caused by munitions haphazardly stored at the base, killed 13 sailors and fire fighters and incapacitated the island’s biggest power station.

The resolution was passed by opposition parties at the time and was ignored by the president.

Earlier, the Citizens Alliance and the Green party insisted on passing a bill blaming Disy, Akel, and Diko for the co-op’s demise.

Disy chief Averof Neophytou asked why the two small parties didn’t submit a proposal for the dissolution of parliament and hold fresh elections in May along with the European poll.

He said their bill called on parties, which controlled co-ops before 2013 to assume their responsibility in practice.

Political responsibility cannot be assumed through resolutions, Neophytou said. Behold is Rhodes, behold is the leap, table a proposal to dissolve parliament … We’ll assume our responsibility and let the people judge us.”

Akel MP Giorgos Loukaides said the co-op sale was a premeditated crime. The findings of the probe were thorough and could not be interpreted selectively, he added.

Loukaides said the government and Disy had turned the financial sector into an oligopoly, as was their objective.

Diko deputy chairwoman, Christiana Erotokritou, said people who spoke about the pre-2013 era essentially tried to divert attention from all that happened afterwards.

She said the period before 2013 could not be compared with the responsibilities in the period after.

“I ask, if the co-op’s non-performing loans were so high, why did the management write off hundreds of millions with such ease since 2013?”

She said what happened in the co-op is was a monument to mismanagement and no one in the government is willing to assume responsibility.