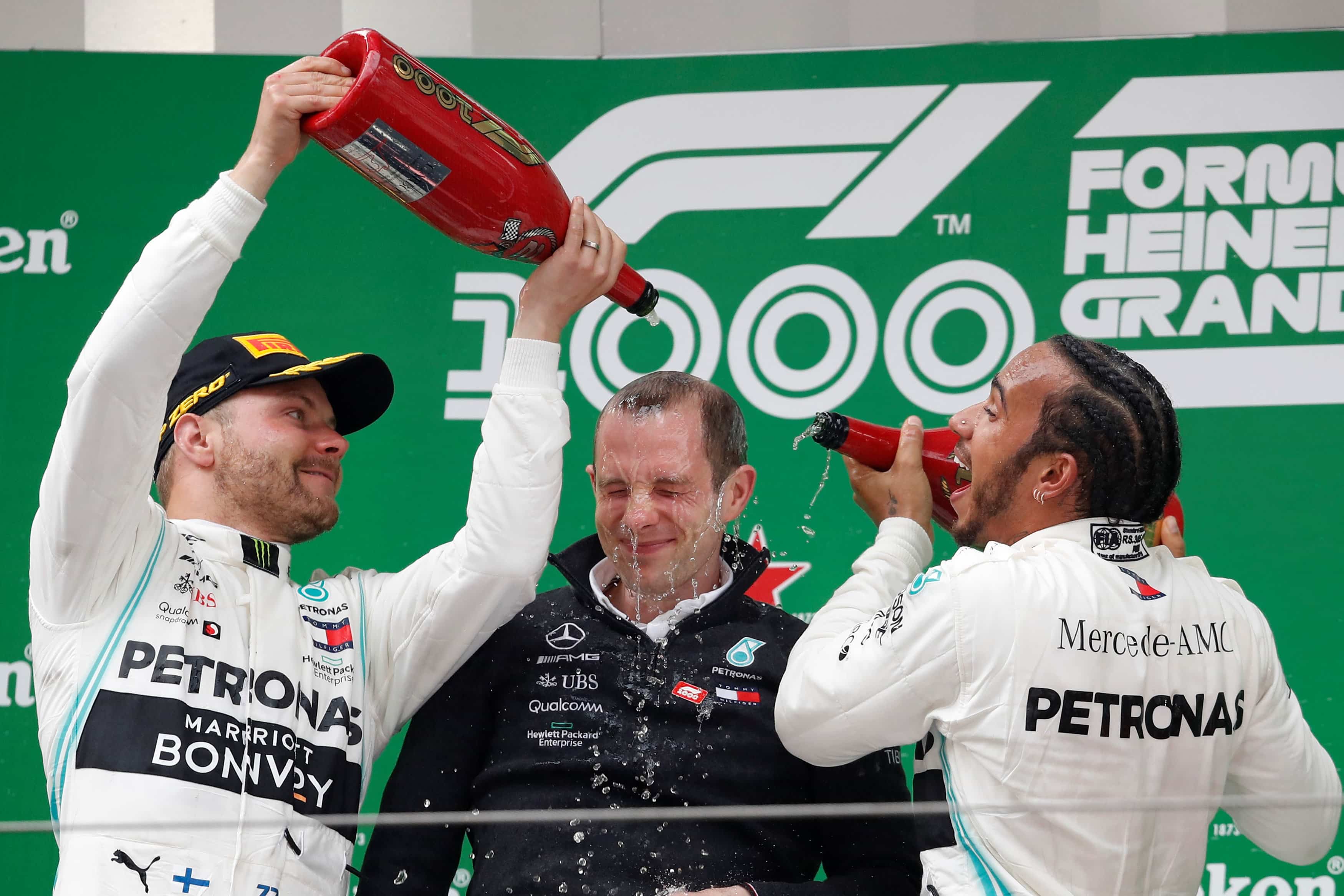 Bottas, who made a poor start from pole and lost out to five times world champion Hamilton into the first corner, was second for his team’s third one-two finish in as many races this season.

Ferrari’s Sebastian Vettel took third place, his first podium appearance of the campaign, with Red Bull’s Pierre Gasly denying the German an extra point with the fastest lap right at the end.

The comfortable win in a race short on thrills was the 75th of Hamilton’s career, and second in a row after his lucky triumph in Bahrain two weeks ago.

“To have a one-two together is really special in the 1,000th Grand Prix. The start was where I was able to make the difference, and after that it’s kind of history,” said the Briton, who also won the 900th in Bahrain in 2014.

He is now just 16 victories short of Michael Schumacher’s all time record tally of 91.

Hamilton has 68 points to Bottas’s 62 with Red Bull’s Max Verstappen third on 39. In the constructors’ standings, Mercedes are already a hefty 57 clear of second-placed Ferrari.

There has yet to be a winner this year from pole position, with Bottas triumphant in the Australian opener in similar fashion to Hamilton in China.

“I think I lost it in the start. The car was feeling OK and otherwise the pace was similar,” said the Finn, who was never under any real threat from behind.

“In the first stint in the dirty air I couldn’t follow. Shame about the start, I got some wheel spin when I went over the white line, the start-finish line which is immediately after my box, and I lost it there.”

Vettel’s team mate Charles Leclerc, on pole in Bahrain but denied victory there after a late loss of power while leading, finished fifth behind Verstappen, who briefly went wheel-to-wheel with Vettel for the final podium spot.

Leclerc got ahead of Vettel at the start but was Instructed by Ferrari to let his team mate through on lap 11, an order the Monegasque complied with while making clear that he did not agree.

“Let Sebastian by,” he was told over the radio while in third place. “But I’m pulling away,” responded the 21-year-old.

Vettel then struggled to find a rhythm when freed up to take on the Mercedes pair, but Leclerc was the clear loser of a situation that pushed him back and behind Verstappen after the pitstops despite an attempted longer stint.

“I’m happy to be on the podium,” said Vettel, who made two pitstops that Mercedes covered by switching to a similar strategy. “But (the race was) tough because we tried to stick with them but just couldn’t.”

Ferrari boss Mattia Binotto said the team has just wanted to try everything they could, with Hamilton pulling away at the front.

“I understand the feeling of Charles. It’s a shame for him but at that stage of the race Mercedes were slightly faster and we simply tried to give Sebastian a go and see if he could keep the pace of Mercedes,” he explained.

“If Charles is upset, he is right to be upset. We should accept it, it’s a shame for him and next time maybe it will be to his advantage.”

Mercedes pitted Bottas first to protect him from Vettel, a move that reduced Hamilton’s lead, and later on pitted the pair in a perfectly timed sequence with Hamilton leaving the box just as Bottas arrived.

Gasly was sixth, ahead of Renault’s Daniel Ricciardo — the Australian’s first finish of the season after two retirements– and Racing Point’s Sergio Perez.

Kimi Raikkonen finished ninth for Alfa Romeo and Thailand’s Alexander Albon, who started from the pitlane after missing qualifying due to a heavy crash in final practice, took the final point for Toro Rosso.

The last two and the other McLaren of Carlos Sainz were involved in a three-car tangle on the opening lap that resulted in a brief virtual safety car period.

Kvyat was handed a drive-through penalty for causing the collision, a decision the Russian felt was unfair and needed clarifying.

Pitfalls of the velvet divorce