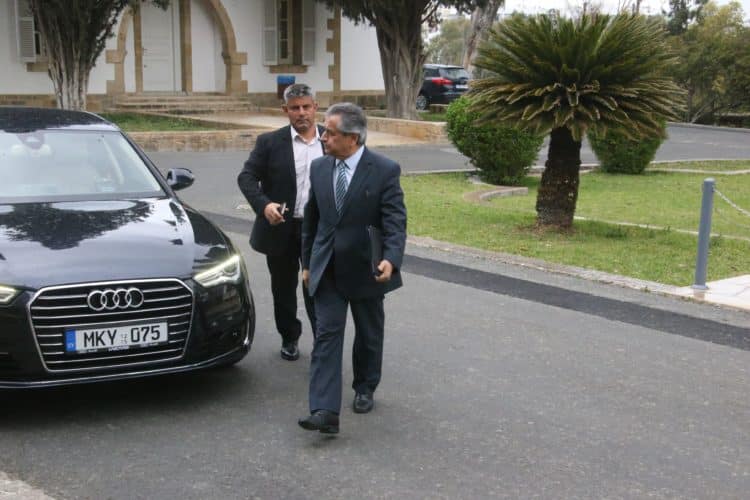 Costas Clerides arriving at the presidential palace on Monday

Attorney-general Costas Clerides would not speculate on Monday on the probability of success of an appeal against a court decision that reversed payroll reductions imposed on civil servants as part of an austerity drive in 2012, but said he would not recommend filing one if there was no chance.

His comments followed a broad meeting at the presidential palace to discuss the March 29 administrative court decisions on three appeals filed by civil servants.

The court said a freeze of incremental pay rises, a 3 per cent contribution to pensions, and a reduction in civil servants’ pay was in violation of article 23 regarding the protection of the right to property.

Clerides said it was premature to talk about amending the constitution, as he declined to speculate on the chance of success of the state’s appeal.

“Certainly, no lawyer, the attorney-general more so, would advise filing an appeal if there were no chances; but as I said, predictions on difficult matters of a constitutional nature, European law, etc, cannot be easily made,” he said.

Clerides said the state’s appeal will focus on matters relating to the correct interpretation and implementation of the constitution “and we should not talk about amending it at this stage.”

The government has said it would put measures in place to counteract the effects of the court decision, including seeking a change of the constitution if its appeal failed at the supreme court.

The attorney-general said they must file a request to suspend execution of the administrative court decisions.

The state will also seek to have the case heard as soon as possible by the supreme court’s full bench of 13 judges.

Addressing talk relating to possible conflict of interest, Clerides said judges were not affected because their income was the subject of a different article in the constitution.

The fiscal consolidation measures affecting exclusively the public sector passed by parliament before Cyprus agreed the terms of its 2013 bailout with international creditors included a general wage and hiring freeze, a 10 per cent drop in hiring salaries, and a permanent up-to 12.5 per cent reduction in pay.

Implementation of the administrative court’s decision would cost the state over €1bn in the next four to five years as it reinstates salaries to previous levels.

But only those who applied to the court are expected to receive backpay.

“When an applicant went to court is also important because some applied in 2012, others in 2013, yet others in 2017. Retroactive return of money would depend on when each one applied,” Clerides said.