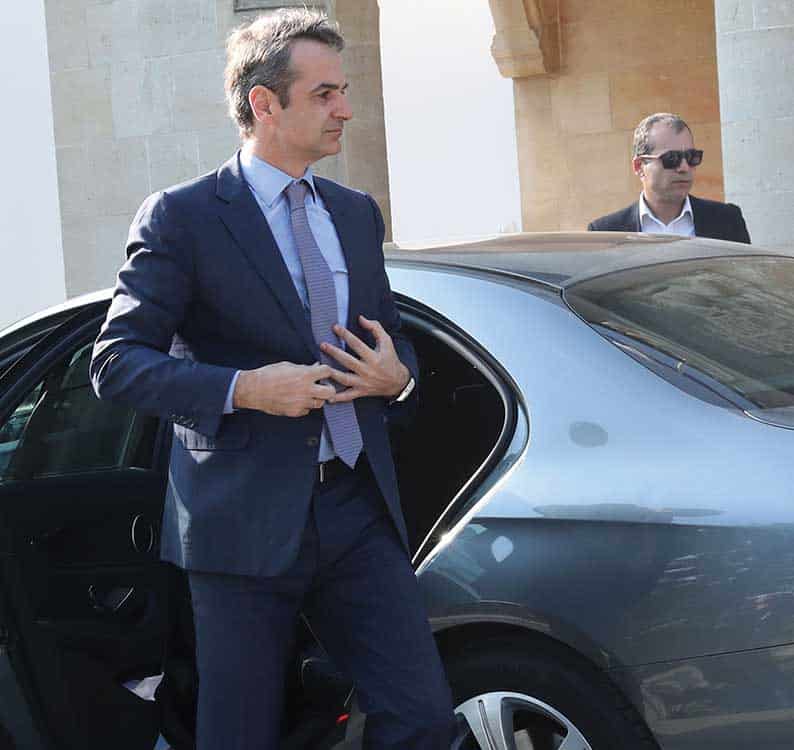 Kyriacos Mitsotakis at the presidential palace on Friday

Mitsotakis, on a two-day visit to Cyprus, was hosted by President Nicos Anastasiades at the presidential palace.

“I reiterated once more my full confidence and support in President Anastasiades’ initiatives and expressed cautious optimism that substantive progress will be achieved on the basis of the Republic of Cyprus’ non-negotiable positions,” Mitsotakis said.

During his visit, MItsotakis said on Thursday he was aiming to renegotiate Greece fiscal targets in order to stimulate growth, he told the 9th Nicosia Economic Congress on “The Cyprus Economy, the way forward.”

Making clear that if elected he would proceed with tax cuts in order to give incentives for investments and innovation in Greece, Mitsotakis explained how these tax cuts could be funded. As he said, “the first set of tax cuts can be funded through fiscal rebalancing respecting our fiscal targets of 3.5%”.

However, he added that his aim would be to renegotiate the fiscal target, something that he won’t do immediately, but after restoring credibility in the Greek economy in terms of delivering real reforms.

“In the short term we will be complying with the 3.5% deficit rule. But once we start to deliver real reforms, I think it would be fair to go to European creditors and tell them look, if you help us by slightly relaxing the fiscal targets, we will use that fiscal space to further stimulate growth”, he said.

The critical element that needed to be addressed was growth in order for the debt to be sustainable too, he said. “Without high growth rate we are condemned to underperform,” he added.

He also said that his governance would be supportive for capital investment, investment in innovation, real estates, tourism and other ambitious projects that would create jobs.

Classical guitar from one of the world’s best