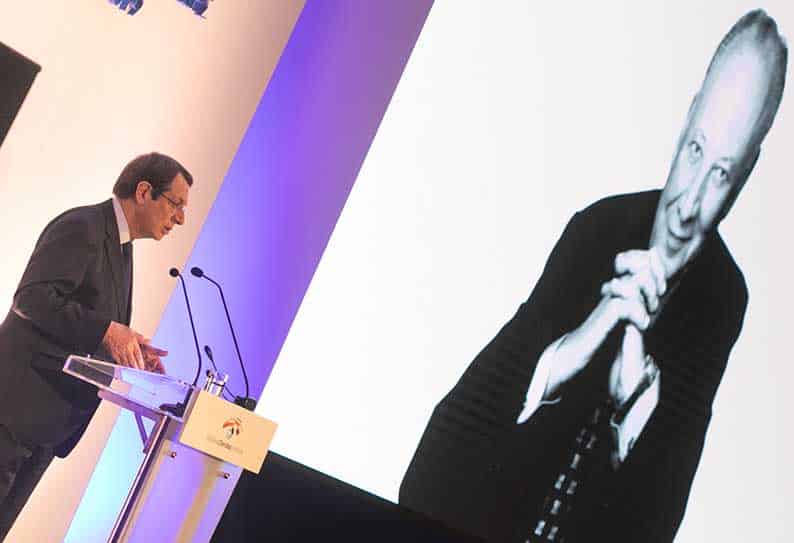 In line with the “daring political legacy” left by former president the late Glafcos Clerides, whose birth 100 years ago on April 20, 1919 was commemorated on Saturday, President Nicos Anastasiades said that he too “dares to propose new exit routes for our troubled country”.

Clerides, who founded ruling Disy in 1976 and became the island’s fourth president, was honoured on Saturday in an event organised by the Glafcos Clerides Institute.

Speaking at the event,  Anastasiades referred to Clerides as “our political father… who is universally known as the leader who could not be overtaken by history.”

Clerides served as president of the Republic of Cyprus for two consecutive five-year terms between 1993 and 2003, when Tassos Papadopoulos took over the reins. Clerides passed away in November 2013, at the age of 94.

Anastasiades praised Clerides as a leader who left a political legacy of “respectful but daring political pragmatism”, asserting that he himself would continue to act on the basis of this legacy.

“I want to assure you that my highest concern is to see our vision realised, to see how conditions of peace and stability can be created in this troubled country,” Anastasiades said.

“I often dare to propose new ways of breaking the stalemate so that the conditions can be created for a functional, viable, long-lasting solution, rather than any solution that will collapse the following day,” he added.

This is why, Anastasiades continued, “we should not fear moving away from stereotypes when necessary, or to remain trapped in opinions put forward 45 years ago”.

“We should not fear to say ‘respectful of your concerns fellow Turkish Cypriots but it is not possible to accept your wish to determine the fate of the whole’. This is why I am proposing a decentralisation of powers, so that with greater autonomy we can co-exist without the concerns that may arise as a result of the fact that the Greek Cypriot community is a majority,” Anastasiades said.

Anastasiades also referred to his proposal made earlier this month for a parliamentary democracy, which he said would create conditions of cooperation not on the basis of ethnic difference but of the political concerns that must determine the functionality of each government.

“We do not denounce the fair representation of Turkish Cypriots, but strive to achieve something whereby positive or negative votes are not necessary.”

Averof Neophytou, the head of the Glafcos Clerides Institute and the Disy leader praised Clerides’ devotion to his country, which he led with “the ethos of measure, consistency and humanity… but also with the ethos of a radical politician, who never cowered from clashing with the status quo.”

Clerides “contributed to the consolidation of democracy, and created the conditions for a realistic and nationally responsible position on the Cyprus issue.”

While Clerides accomplished his strategic goal of integrating Cyprus into the European Union, Neophytou said, “his unfulfilled vision” was that of a united Cyprus.

Among the attendees of the event were the former foreign minister Ioannis Kasoulides, the former PM of Greece Costas Simitis, and the former presidential undersecretary and close friend and aide to Clerides, Pantelis Kouros. Simitis and Kouros were awarded the Glafcos Clerides peace and cooperation award.