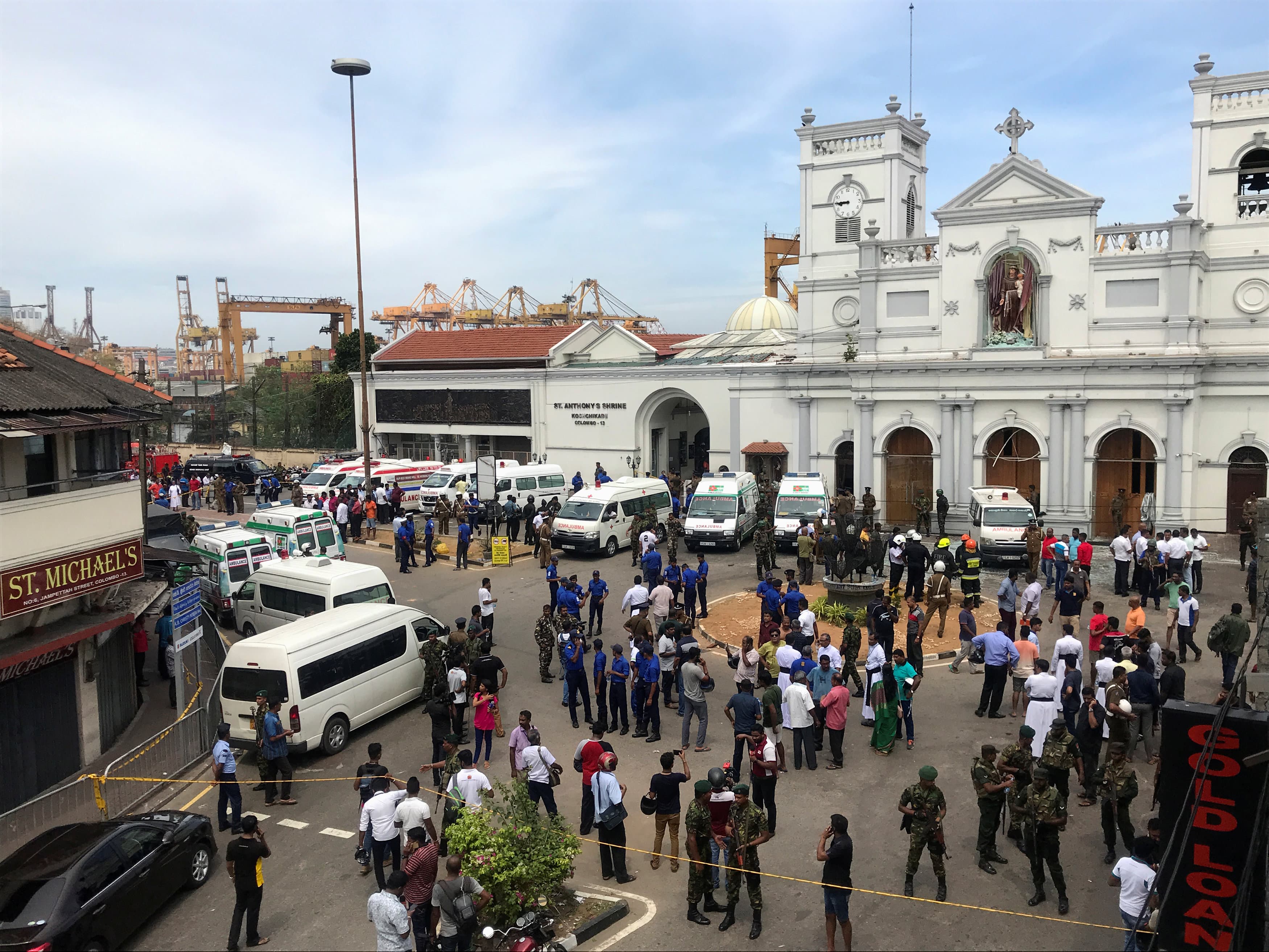 Easter Sunday bomb blasts at three churches and four hotels in Sri Lanka killed more than 200 people and wounded at least 450, police officials said, the first major attack on the Indian Ocean island since the end of a civil war 10 years ago.

Seven people were arrested and three police officers were killed during a security forces raid on a house in the Sri Lankan capital several hours after the rash of attacks, some of which officials said were suicide bombs.

The government declared a curfew in Colombo and blocked access to social media and messaging sites, including Facebook and WhatsApp. It was unclear when the curfew would be lifted.

“Altogether, we have information of 207 dead from all hospitals. According to the information as of now we have 450 injured people admitted to hospitals,” police spokesman Ruwan Gunasekera told reporters. At least 27 of the dead were foreigners.

There were no immediate claims of responsibility for the attacks in a country which was at war for decades with Tamil separatists until 2009, a time when bomb blasts in the capital were common.

Local Christian groups have said they faced increasing intimidation from some extremist Buddhist monks in recent years. Last year, there were clashes between the majority Sinhalese Buddhist community and minority Muslims, with some hardline Buddhist groups accusing Muslims of forcing people to convert to Islam.

Dozens were killed in one of the blasts at St. Sebastian’s Gothic-style Catholic church in Katuwapitiya, north of Colombo. Gunasekera said the police suspected a suicide attack there. Pictures from the site showed bodies on the ground, blood on the church pews and a destroyed roof.

Local media reported 25 people were also killed in an attack on an evangelical church in Batticaloa in Eastern Province.

The hotels hit in Colombo were the Shangri-La, the Kingsbury, the Cinnamon Grand and the Tropical Inn near the national zoo. There was no word on casualties in the hotels, but a witness told local TV he saw some body parts, including a severed head, lying on the ground beside the Tropical Inn.

The first six explosions were all reported within a short period in the morning just as church services were starting.

The bodies of 27 foreigners were counted at hospitals, officials said. Among them was a Dutch national, that country’s foreign minister said.

There was an eighth explosion at a house in Colombo. Police and media said that three officers were killed and seven people detained during a raid on this location.

Prime Minister Ranil Wickremesinghe called a national security council meeting at his home for later in the day.

“I strongly condemn the cowardly attacks on our people today. I call upon all Sri Lankans during this tragic time to remain united and strong,” he said in a Tweet.

President Maithripala Sirisena said he had ordered the police special task force and military to investigate who was behind the attacks and their agenda.

The military was deployed, a military spokesman said, and security stepped up at Colombo’s international airport.

One of the explosions was at St. Anthony’s Shrine, a Catholic Church in Kochcikade, Colombo, a tourist landmark.

Last year, there were 86 verified incidents of discrimination, threats and violence against Christians, according to the National Christian Evangelical Alliance of Sri Lanka (NCEASL), which represents more than 200 churches and other Christian organisations.

This year, the NCEASL recorded 26 such incidents, including one in which Buddhist monks allegedly attempted to disrupt a Sunday worship service, with the last one reported on March 25.

Out of Sri Lanka’s total population of around 22 million, 70 percent are Buddhist, 12.6 percent Hindu, 9.7 percent Muslim and 7.6 percent Christian, according to the country’s 2012 census.

In its 2018 report on Sri Lanka’s human rights, the U.S. State Department noted that some Christian groups and churches reported they had been pressured to end worship meetings after authorities classified them as “unauthorised gatherings”.

The heads of major governments condemned the attacks.

U.S. President Donald Trump said America offered “heartfelt condolences” to the Sri Lankan people and stood ready to help, Indian Prime Minister Narendra Modi said there was “no place for such barbarism in our region”, and Turkish President Tayyip Erdogan said the bombings were “an assault on all of humanity”.

Pope Francis, addressing tens of thousands of people in St. Peter’s Square to hear his Easter Sunday message: “I wish to express my affectionate closeness to the Christian community, hit while it was gathered in prayer, and to all the victims of such cruel violence.”

Christians celebrate the resurrection of Jesus Christ on Easter Day after his death on the cross.

The prime minister of New Zealand, where a gunman shot 50 people dead in two mosques last month, said in a statement: “Collectively we must find the will and the answers to end such violence.”

A new paradigm for the Turkish Cypriot community

Apoel and Apollon face crucial games in race for the title