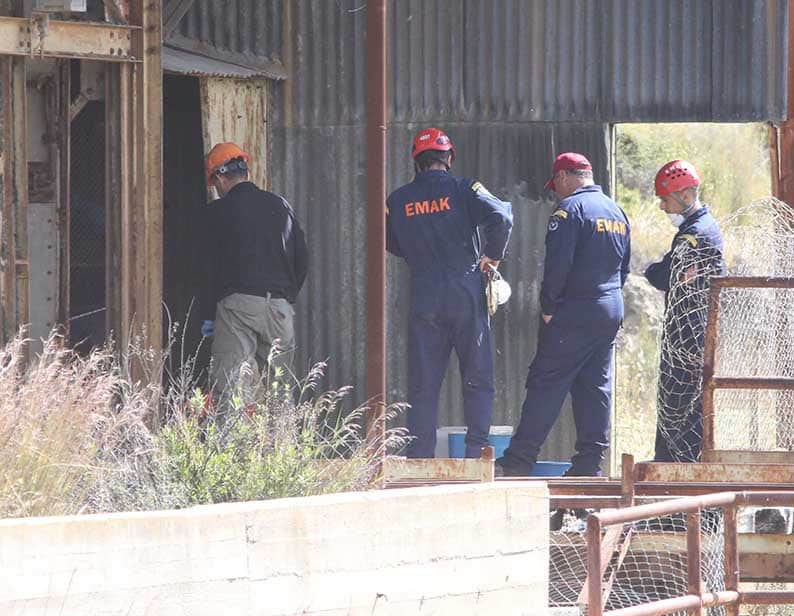 The search for more bodies in a mine shaft in Mitsero, from which two adult women have already been retrieved, was postponed for safety reasons on Monday evening after underwater cameras used by search crews showed that the metal beams holding up the structure could collapse.

Specialists will be called to repair the dented beams revealed by a robotic deep-water camera used by search crews, the fire service chief Marcos Trangolas said. Until that time the search operation at the mine will be called off.

Only specialists will able to say when the search operation at the mine shaft is safe to continue, Trangolas said.

Earlier on Monday, search teams combed the Mitsero mine and a lake at Xyliatos for a missing six-year-old girl whose mother was found dead in a water-filled shaft with the body of another woman, as police refused to speculate on the scale of the crime.

The authorities fear there could be more bodies at the abandoned mine where Filipina Mary Rose Tiburcio, 39, was found last week and the body of another woman on Sunday.

A post mortem failed to yield any clues concerning the identity of the second body.

According to police, a 35-year-old army officer held in connection with the case, had told them the body belonged to Arian Palanas Lozano, 28, also from the Philippines.

The search at Memi lake near Xyliatos reservoir was focusing on finding the body of Tiburcio’s six-year-old child, Sierra, but nothing was found by the time crews called it a day in the afternoon.

While the search was postponed at the mine pending the repair of the metal beams of the shaft, crews will continue searching on Tuesday for the girl at Memi lake, where Trangolas said “crucial areas” have identified.

Before calling of the search at the mine state broadcaster CyBC said the camera managed to reach to very bottom, 130 metres deep, though it is unclear whether evidence of further bodies was found.

Staff from the geological survey department also visited the scene on Monday to assess the situation.

Trangolas said there were obstacles in the shaft, like debris, which they were trying to overcome, either with the camera or other ways he did not specify.

“The search is very sensitive and that is why we will make every effort for as many days or time necessary,” Trangolas said.

However, Ray O. Bayson, volunteer leader of the Filippino community in Cyprus, told the Cyprus Mail that the community now suspects that another of their compatriots, a 30-year-old woman who went missing in December 2017, could have also been a victim of the suspect as her friends said she was probably chatting with him.

The woman in question has been reported missing from her Nicosia residence since mid-December 2017 and is also included on the list of missing persons.

Tiburcio was pulled out of the shaft last Sunday week. She was accidentally discovered by several foreign nationals who were recording footage at the mine.

Police were led to the 35-year-old suspect who had allegedly used social media to meet women.

The suspect was arrested last Thursday and has reportedly admitted to killing the two women, but denies killing the child.

Reports said he told police that while at his house, the child started choking on her own vomit. He strangled her mother because she panicked and started shouting, he said.

The suspect said he dumped the girl’s body in the lake and the mother inside the shaft.

Other reports said he told police he choked Lozano to death while they were having sex.

“The police and Cypriot society are faced with an unprecedented form of crime, a form of crime whose extent it would be premature to assess,” chief of police Zacharias Chrysostomou said.

Chrysostomou said such crimes were usually seen in countries with large populations, as the mass media are already talking about the first recorded case of a serial killer in Cyprus.

The chief said the murders will be investigated thoroughly and carefully so that if and when it goes to court, prosecutors will have a concrete case in their hands.

Chrysostomou also addressed the blistering criticism of his force, which appeared to have underestimated the initial missing person report filed last year, failing to conduct a proper investigation that could have led them to the alleged perpetrator.

He was responding to calls for his resignation and that of Justice Minister Ionas Nicolaou from some political parties.

He said the police recognised and understood the public’s feelings and the questions raised, but appealed for patience pending the investigation.

“We can assure that we have every intention to fully investigate these questions, with transparency and honesty, and take corrective measures where necessary and assign blame,” Chrysostomou said.