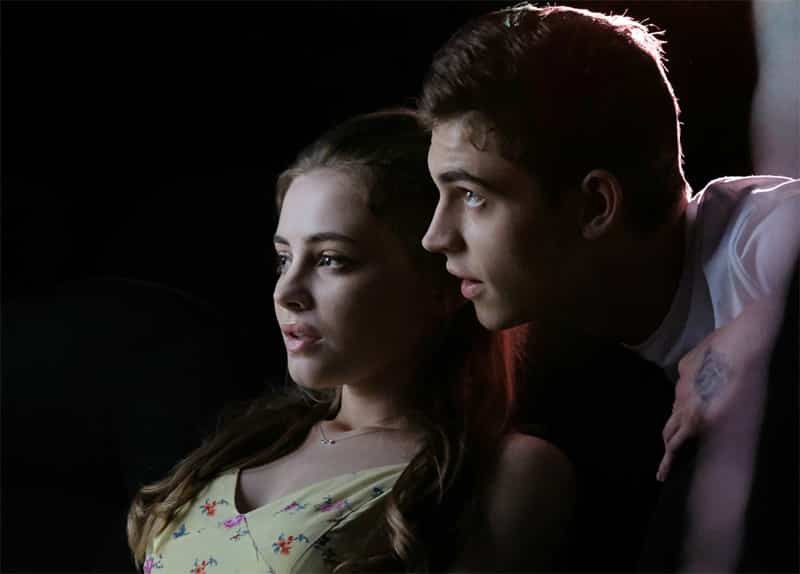 If this is ‘After’ I’d hate to see the ‘Before’, hahaha! Sorry, that was unfair and reductive – though also a reminder that it’s not entirely clear what the title of this teen romantic drama refers to. Possibly it has something to do with becoming a woman, tying in with a young girl’s state of post-deflowerment – and Tessa (Josephine Langford) appears to have crossed that particular hurdle with Hardin (Hero Fiennes Tiffin, nephew of Ralph) in a scene where they get down and dirty to the strains of soft piano and suggestive close-ups of clothes being gently removed, but apparently not. “I want you now,” says Tessa a few scenes later, taking charge sexually – which of course is a righteous message for young girls everywhere – and setting a course for ‘After’, cherry still un-lost.

Tessa is a good girl. “This is me we’re talking about,” she says reassuringly when her mum is worried that her new college roommate – older, weed-smoking, orange hair, nose rings – might perhaps be a bad influence, and Mum relents. Tessa wears a white dress that goes all the way up to the neck and won’t even swim in her underwear, putting on Hardin’s black T-shirt to cover her modesty; she’s a very good girl. Hardin, on the other hand, is a bad boy. Not only is he rude – and British! – he’s cynical too. “Love is just a transaction,” he claims in Lit class, when the teacher asks about Pride and Prejudice. “How can someone be so arrogant?” fulminates Tessa later, sounding very Elizabeth Bennet.

The good girl/bad boy cliché is as old as Jane Austen, probably older (though Mr. Darcy was an unusually refined example of the breed). It remains very popular – but is it still acceptable, in this day and age? The bad boy thinks only of himself; he’ll break your heart. The relationship is masochistic – which is fine in itself, it’s a woman’s choice if she wants to be tortured (see also: 50 Shades of Grey), but it’s also that the bad boy is hard work, a.k.a. “complicated”; he demands to be soothed, supported, shown a better path, brought to his senses. The woman is defined by the man, instead of having her own needs attended to. “I’m a mess,” admits Hardin, as if to say ‘Help me’. (The bad-boy façade was just a mask, of course.) “We’re both a mess,” sighs Tessa, and cue the soft piano.

The film may be problematic, but it’s mostly watchable – at least till the plotting grows increasingly unlikely, culminating in a Big Twist so improbable it leaves Tessa flailing about in slow-motion, trying to wrap her head around it. The final act is dodgy in general, very much including the scene where Hardin opens up – “One night, when I was eight…” – about the traumatic event which turned him into a bad boy (both he and Tessa have childhood traumas, inevitably caused by toxic dads). You’d expect the trauma to involve some family crisis or betrayal, maybe seeing Dad with another woman; you’d hardly expect it to involve a gang-rape (!) and a home invasion. Even more surprising is the bit where Tessa’s mum (who doesn’t even live in the same city) turns up unannounced, opening the door of her daughter’s dorm-room without even knocking – though actually that’s not so surprising. After may be set in college, but its mindset is solidly high-school.

It’s sweet, though. We’ve had some cringe-inducing teen dramas lately (Midnight Sun, this means you) – but After is pleasant enough, maybe because it’s a tale of an uncool girl being tormented by the mean kids, maybe because the central romance is so charmingly innocent. Tessa does have a boyfriend – but he’s still in high school, he’s a bit of a drip, he chides her for being irresponsible when he learns she’s been drinking at a party (oh noes!), and their sex life together is apparently a work in progress. “Have you never been touched before?” asks Hardin, shocked – though he himself is hardly a delinquent, despite his bad-boy credentials. He takes Tessa to a lake in the woods to go swimming (not skinny-dipping, just swimming), and does incredibly daring things like hiding in the library with her after closing time. Then they sit together in the dark and… read passages from classic novels to each other! Kids these days, eh?

Should we worry about the un-progressive messages promoted by After? Probably not. This is a mushily romantic, impossibly clean-cut film, and probably just as much of a comforting fantasy for today’s teenage girls as Pride and Prejudice; note that Hardin doesn’t just have Wuthering Heights on his bookshelf, he also has bookmarks neatly affixed to the key chapters. “He is more myself than I am,” he declaims – quoting Cathy on Heathcliff, the original bad boy. Never let this dopey teenpic be spoken of in the same breath as Emily Bronte. Still, you can’t hate it.

Weather to become warmer and sunnier