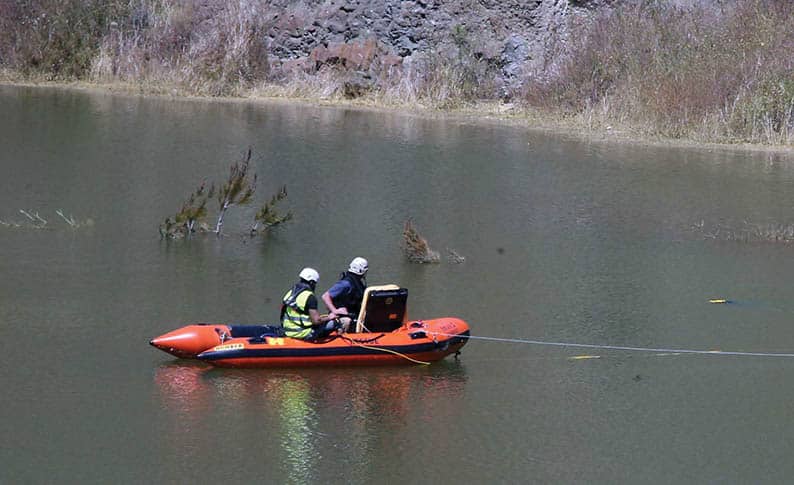 Post-mortem on second body inconclusive, no sign of child in lake search

A post-mortem conducted on a second body found in the Mitsero mine shaft on Tuesday showed that the victim was an Asian woman, but failed to establish her identity, police said as searches continued both at the mine for other possible victims, and in Xyliatos lake for a missing 6-year-old girl.

State pathologists Sophocles Sophocleous and Nicholas Charalambous conducted the post-mortem examination, which restarted on Tuesday after being halted on Monday due to the difficulty identifying the badly-decomposed body.

The examination, conducted in the presence of an anthropologist this time, finished at approximately 3pm, and authorities said that they would wait for the results of DNA testing to establish the identity of the woman who it is believed could be Arian Palanas Lozano, a Filipino woman  reported missing last July.

Earlier Tuesday, fire service chief, Marcos Trangolas said that the search for the body of 6-year-old, Sierra Graze Seucalliuc, the daughter of the first woman removed from the mine shaft, Mary Rose Tiburcio were also inconclusive.

The search, focused in a lake at Xyliatos where a robotic camera was used to comb the murky water in a bid to find the body of Sierra whom a 35-year-old suspect, National Guard captain, Nicos Metaxas, allegedly admitted to dumping there.

“Attempts will continue tomorrow [Wednesday], with the use of another system,” Trangolas said. He added that divers might be used next to search the lake to try and find the little girl.

However, in comments to CyBC the head of the geological surveys department, Costas Constantinou said that investigations in the shaft may be difficult due to the amount of water in the mine and due to its size.  He said that the mine was an “underground city,” adding that pockets were located in the mine, which may have filled with water from the rains, and pushed the bodies of other possible victims into unknown areas.

The suspect, is currently in police custody, and he is expected to appear in court on Friday.

Metaxas was on Tuesday interviewed by a psychiatrist, according to reports, and the results were passed on to investigators.   Police said that the suspect’s office at the Klirou military base, which was searched, where they seized his work computer.  During their investigations, authorities already seized his personal computer from his home.

It appears that Metaxas also had a side job as a photographer. One of his models Thea Georgieva from Bulgaria told Phileleftheros, as pictures surfaced of him videotaping an event for former President Demetris Christofias, and snaps of him at other events attended by public figures, that he  had been “very professional” with her.

The suspect is believed to have approached the victims through the online social media platform Badoo, where he would message women and then meet with them.

Authorities previously said that they believed there might be two more bodies in the mine shaft.  If there is also another adult woman’s body there, and given the profile of the first two victims, the third missing Filipino woman on the more recent police list might have met a similar fate, and more disturbingly, prior to both Tiburcio and Lozano.

Maricar Valdez Arquiola, 30, was reported missing from Nicosia on December 13, 2017, which means she could have been the first victim, but the question remains open as to how far back the killings really go. Police made a second public appeal regarding Arquiola in February 2018 but no trace of her has been found so far other than her identity card being found on a street in the capital.

Arquiola was reported to have been in contact with Metaxas, who went under the pseudonym ‘Orestis’ on the online platform.  Ray O. Bayson, the volunteer leader of the Filipino community in Cyprus, told the Cyprus Mail on Tuesday that a close friend of Arquiola’s mother said the woman was suffering terribly because there was no news about her daughter.

He added that Arquiola’s mother is dealing with anxiety and depression, as she has been left alone with her grand-daughter, who asks for her mother all the time.

“This is heartbreaking, Maricar’s mother told her friend,” Bayson said, expressing his own disappointment as well.

Political parties weighed in on the matter on Tuesday, with Disy leader Averof Neophytou saying: “The completion of the investigations takes precedence.”

Neophytou expressed his condolences to the families as well. “We want to send a message beyond Cyprus, and say our people., our society, does not have anything against any race or nationality.”

Main opposition party, Akel’s leader Andros Kyprianou said that Disy was trying to cover up the responsibility of the Justice Minister, Ionas Nicolaou, and the police in the matter because numerous questions have remained unanswered as to how far police went to find the mother and child last May, and whether they could have found a suspect sooner, which would have saved the life of  Arian Palanas Lozano three months later.

“We believe that there is absolutely no problem in [them] taking responsibility for the sluggishness, disinterest, and criminal negligence that has been shown by the police,” Kyprianou said.

Talks under way for flights between Alexandria and Cyprus for €60