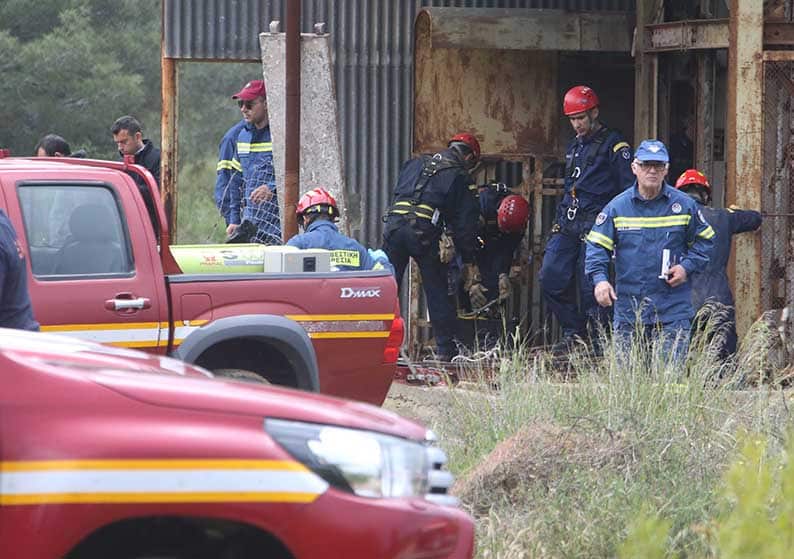 The chief of police has appointed a committee to look into any missteps by the force in investigating the cases of missing women that have turned up murdered in the Mitsero mine, and that have left a six-year-old girl missing presumed dead, police spokesman Andreas Angelides said on Wednesday.

Speaking to reporters at the old Mitsero mine where the bodies of two Filipino women were discovered in a deep mine shaft, Angelides said police had searched ten different areas that included Mitsero and the lake at Xyliatos where the search is ongoing for the missing child. Police had also seized three vehicles for DNA testing. An 11-man team of detectives were working on the cases, he said.

“The suspect has been questioned again but I will not publicly say anything about this,” he said, adding that it was likely he would be questioned several more times.

A 35-year-old army officer Nicos Metaxas is on remand in connection with the murder of the two women brought up from a mine shaft in Mitsero in the past week. He has allegedly confessed to killing both, and of sinking the child’s body in the lake.

“Nothing has been identified inside the [Mitsero] shaft but the search continues because there is reason to continue. If it is decided to halt the search, that will come later,” Angelides said. He said searches were going on in other areas but did not specify where.

“The motivation is being explored and the profile of the suspect put together,” he said.

About the search for the missing child, Angelides said it was continuing.

He said a three-member team had been appointed to carry out an administrative inquiry to see if there were disciplinary or criminal offences by any member of the force in earlier investigations that failed to find women reported missing that were never located or their fate established.

Also, if there is evidence that new arrests should be made, that would be announced, he added.

Searches resumed both at Mitsero and at the lake in Xyliatos on Wednesday morning, the former for other possible murder victims and the latter the missing six-year-old daughter of Mary Rose Tiburcio, the first woman’s body to be recovered from the Mitsero mine shaft on April 14.

A second woman who has not yet been identified other than as being Asian, was pulled out of the shaft badly decomposed last Saturday. Both women were naked and bound.

Investigations in Xyliatos are to use specially-trained divers after failing to find a trace of the child’s body so far, even using an underwater robotic camera. This operation is likely to get underway on Thursday.

According to reports, a special boat used to repair vessels at sea is being brought in, along with a specialised diver from the private sector who is trained in deep-water diving.

However, near-zero visibility and the topography of the lake bed could make the project difficult. Reports also suggest the suspect in the case may be misdirecting the search to the lake and that the child’s body could be in Mitsero.

Meanwhile, after addressing safety concerns relating to the support structure around the mine shaft’s entrance, rescue crews are back at the scene where a second body was brought up last Saturday. The high-tech robotic camera was lowered in the deep shaft after being brought over from the search operation at Xyliatos.

A clearer picture of what else might be found down there is expected later on Wednesday, fire chief Marcos Trangolas told reporters at the scene.

“It is expected that by the afternoon it will be clearer what is in the mine shaft,” he said.

“The robotic camera that was deployed today went down to a depth of 60 metres and aims to reach the bottom of the well,” he said.

Asked if anything had yet been identified that would suggest something is inside the shaft, Trangolas replied: “No, no, not so far.”

Man arrested in connection with drugs and firecrackers

Water cuts in some Nicosia suburbs due to technical fault