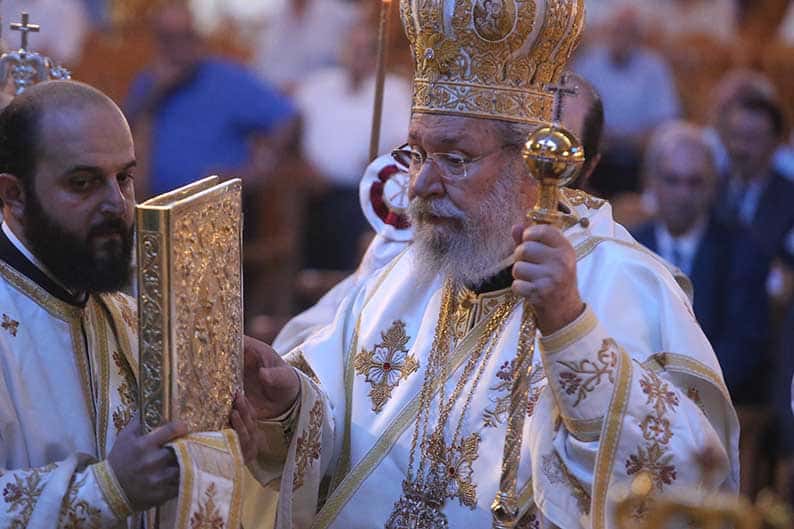 Archbishop Chrysostomos said on Easter Sunday that those who crossed daily to the north for shopping and to travel through the illegal Ercan airport had strayed from national and religious values as much as those who support abortion and cohabitation of same-sex partners.

In his message, read out in churches, the archbishop said the message of the Resurrection was that the hardships the nation is going through are temporary but also give people encouragement to struggle for freedom and be rid of the Turkish occupation.

“The resurrected Jesus Christ gives hope to those weary of the 45-year long occupation that this will pass,” the message said.

Throughout history, he said, as years and generations passed, “45 and 50 or 100 years are nothing more than one moment. They will go down in the future as nightmare, a bad remembrance.”

No matter how difficult it may seem to stand up to the conqueror and no matter how inhumane and brutal the methods he applies for the Turkification of the country may be, he said, “God dethrones despots and entertains the wishes of nations.”

“We have had worse situations and we have survived,” he added.

The Church primate said that the country had survived many invasions and occupations “because our ancestors were not seduced by the promises of the conquerors or have been bent by their threats. Despite all the hardships, they remained committed to the values ​​of our faith and our homeland.”

It is a fact, he said, that a section of the people had today strayed from these values.

This concerns those who exert pressure for just any form of solution to the Cyprus problem, who daily cross to the north, “not to visit churches and the graves of their ancestors but to do transactions with the occupation, for fun, for the use of the illegal airport.”

Another deviation from these values, he said, was corruption that led to the demise of the Cooperative Bank and the sought deconstruction of the people’s morality through the introduction of legislation on abortions, gender choice and the cohabitation of same sex-persons among other things.

“It is obvious that these laws aim at destroying not only the religious but also the national component of our people,” the archbishop said.

In no way can a moral deviation constitute progress or modernisation, he said, just as the Turkish invasion cannot be characterised as a peace operation.

The archbishop called for cultivation of the national self-consciousness and shielding behind the “eternal values of our race” the most important being the freedom of the country.

This shield, he said, ought to be used in the struggle to force Turkey leave Cyprus and fully restore the human rights of the people and the sovereign rights of the Republic of Cyprus.

Towards that end, he said, aligning interests with other countries in the region was useful and that is why he welcomes efforts by the government to that direction.