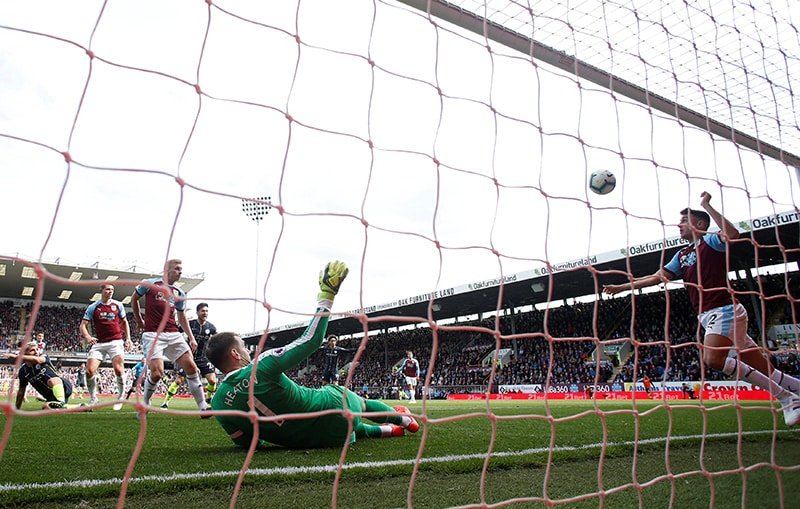 BURNELY 0 MANCHESTER CITY 1
Sergio Aguero was on target as Manchester City restored their one-point lead at the top of the Premier League with a nervous and scrappy 1-0 win over Burnley at Turf Moor on Sunday.

Pep Guardiola’s side now need to win their final games at home to Leicester City and away to Brighton and Hove Albion to retain the title and deny second-placed Liverpool.

City got the breakthrough in the 63rd minute with an uncharacteristically scrappy goal – Aguero’s shot was chested out and cleared by Matt Lowton on the goalline but technology ruled the effort had crossed.

City struggled to get into their usual rhythm in the first half but came out strongly after the break and Burnley keper Tom Heaton did well to keep out a fierce blast from Sergio Aguero at the near post.

Burnley were fortunate to escape a penalty appeal when a drive from Bernardo Silva appeared to strike the arm of Burnley’s Ashley Barnes.

Heaton did well to keep out another fierce drive, this time from Bernardo Silva, before City finally took the lead.

Raheem Sterling went close to a second but Burnley defender Ben Mee produced a wonderful goalline clearance to keep the Clarets in the game.

Burnley, however, pushed hard at the end with Guardiola bringing on two defenders as City held firm to claim the three points.


LEICESTER 3 ARSENAL 0
Ten-man Arsenal suffered a 3-0 Premier League defeat at Leicester City on Sunday in another blow to their hopes of finishing in the top four and qualifying for the Champions League.

Goals from Youri Tielemans and a Jamie Vardy double ensured Arsenal suffered a fourth loss in their last five league games, three of which have now come on the road.

Unai Emery’s side had defender Ainsley Maitland-Niles sent off for a second booking in the 36th minute for a late challenge on James Maddison. He had been cautioned earlier for a foul on Ben Chilwell.

“The second yellow card gave us a lot of problems,” Emery said. “I don’t agree with the first yellow card. It’s the seventh minute of the game, but I respect the referee.

“It did change it a lot to play with one player less because we prepared with our game plan to be strong defensively. But with the red card the plan changed.”

Leicester boss Brendan Rodgers said referee Michael Oliver had no choice but to send off the 21-year-old.

“I think Michael had no choice,” Rodgers said. “There was a number of fouls and it was his second foul in the game that got him a second yellow so it was a good decision.

“It was probably an accumulation of fouls and young Ben Chilwell staying on his feet in the box might have saved him from going earlier.”

Emery withdrew Alex Iwobi at halftime to bring centre back Laurent Koscielny on to shore up the defence but Leicester dominated possession and had 12 shots on target in the match to Arsenal’s one.

Arsenal had goalkeeper Bernd Leno to thank as the German made a string of saves to keep the visitors in the contest, but even he had no chance when Tielemans sneaked past the defence to head home Maddison’s cross in the 59th minute.

Leicester doubled their lead through Vardy who latched on to goalkeeper Kasper Schmeichel’s long ball to first hit the crossbar and then head home the rebound with Leno in no-man’s land.

Vardy grabbed another in stoppage time when Ricardo Pereira dribbled past the defence and squared the ball for the English striker who scored his 18th league goal of the season.

Leicester moved up to eighth and now have a chance of finishing seventh, potentially qualifying for the Europa League next season. Brendan Rodgers’ side sit three points behind seventh-placed Wolverhampton Wanderers with two games to go.

Arsenal can still qualify for the Champions League if they win the Europa League and Emery said they had to shift their focus to the first leg of the semi-final on Thursday when they host Spanish side Valencia.

“We are thinking in the present and the next match is Valencia,” Emery said. “Then we think about Brighton (next Sunday) and winning.

“At the beginning of the season, during the season and now, we know we have possibility in the Europa League also and in the Premier League we will play Brighton at home and try to win.”