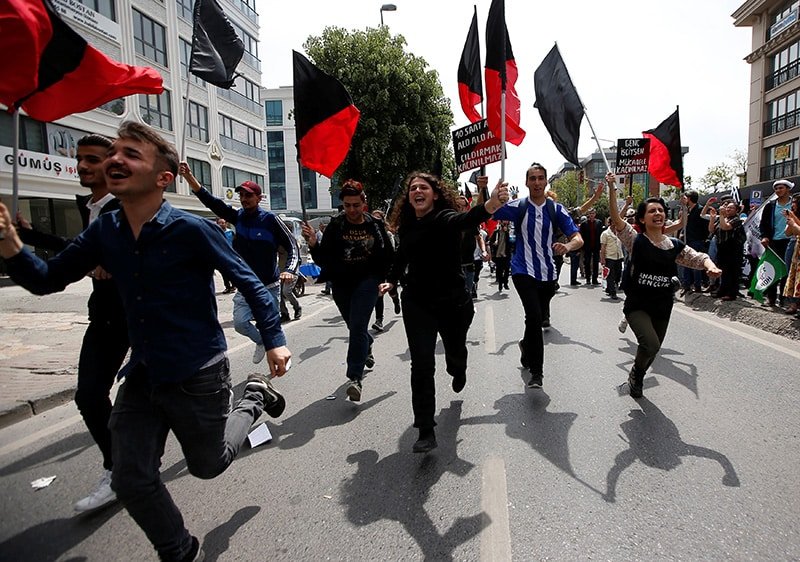 Demonstrators run during a May Day rally in Istanbul, Turkey, May 1, 2019. REUTERS/Kemal Aslan

Turkish police said they detained 137 people in Istanbul on Wednesday for trying to hold illegal demonstrations in various parts of the city to celebrate May Day.

Police had cordoned off Istanbul’s central Taksim square, but small groups of demonstrators converged there anyway.

“Squares belong to the people, they cannot be closed off. Long live May 1!” protesters shouted as police hauled them away, covering their mouths.

Protests for May Day, the international workers’ holiday, are an annual occurrence in Turkey and have in the past been characterised by police action against demonstrators. Protests have often centred on Taksim Square where 34 people were killed during demonstrations on May 1, 1977.

Turkish police regularly prevent the staging of protests in central Istanbul and elsewhere. Ankara tightened restrictions after the imposition of emergency rule following an attempted coup in 2016. The state of emergency was lifted last July.

Earlier on Wednesday, police allowed a ceremony by a few union leaders to go ahead in Taksim Square, and another group laid carnations on a street nearby.

Authorities only allowed mass celebrations in the Bakirkoy district, located some distance from the city centre.

By 1600 GMT, Istanbul police said they had detained 137 demonstrators in various parts of Istanbul, including the central districts of Besiktas, Sisli and Beyoglu.

In Besiktas a small group of protesters began shouting slogans and waving red flags of the leftist People’s Liberation Party (HKP). Television footage showed police scuffling with protesters, rounding some up and putting them in police vans.

Ozgur Karabulut, general manager of Dev Yapi-Is Union, said the celebrations were continuing smoothly in Bakirkoy, with participants from all parts of society.

The Interior Ministry said some 303,000 people had participated in 138 legal May Day events around Turkey.

In Paris dozens of masked and hooded anarchists clashed with riot police in southern Paris on Wednesday, burning bins, smashing property and hurling projectiles, hijacking a May Day rally that was focused on protesting against President Emmanuel Macron’s policies.

Tens of thousands of labour union and “yellow vest” protesters were on the streets across France, days after Macron outlined a response to months of street protests including tax cuts worth around 5 billion euros ($5.6 billion).


In Paris, riot police used tear gas and water cannon, and charged sporadically at several points along the traditional International Workers’ Day rally to disperse groups of masked protesters who had immersed themselves in the crowd.


Some 7,400 police were deployed and they made 200 arrests. Several people were lightly wounded, police sources said.

The main march crossing the southern part of the capital was finally able to move amid relative calm after being prevented from setting off by the clashes, although it appeared that yellow vests and more radical elements rather than labour unions were dominating the march.

The hard-left CGT union denounced police violence and said its secretary general had been tear-gassed.

“This current scenario, scandalous and unprecedented, is unacceptable in our democracy,” it said in a statement.

A Reuters photographer saw several masked protesters removing their outfits to merge into the crowd.

French police had warned on Tuesday that there could be clashes with far-left anarchist groups, known as Black Blocs, after calls on social media for radicals to hit the streets.

Authorities had said they expected some 2,000 Black Bloc protesters from France and across Europe to turn up on the sidelines of the rallies.

The yellow vest protests, named after motorists’ high-visibility jackets, began in November over fuel tax increases but have evolved into a sometimes violent revolt against politicians and a government seen as out of touch.

Macron issued a series of proposals last week in response to the protests, but many in the grassroots movement, which does not have a leadership structure, have said they do not go far enough and lack detail.

The banners in the crowd reflected the anger among some in the movement who feel abandoned by Macron’s economic policies.

The 41-year-old former investment banker pushed a reform blitz during the first 18 months of his presidency that impressed investors but infuriated low-paid workers, who feel he favours big business and is indifferent to their struggle to make ends meet.

Another targeted the president directly: “Macron, what have you done to us?”

Thousands of people also demonstrated in cities from Marseille to Bordeaux and Lyon.

Some 300 yellow vest protesters tried to storm a police station in the Alpine town of Besancon and clashes broke out in Toulouse.

The Interior Ministry said some 151,000 people had demonstrated across the country, including 16,000 in Paris. the CGT said there had been 80,000 protestors in the capital alone.

“We have been trying to fight, to make ourselves heard, for six months and nobody cares. People don’t understand the movement, though it seems pretty simple: We just want to live normally,” said Florence, 58, a trainer in a large company who was marching in Paris.