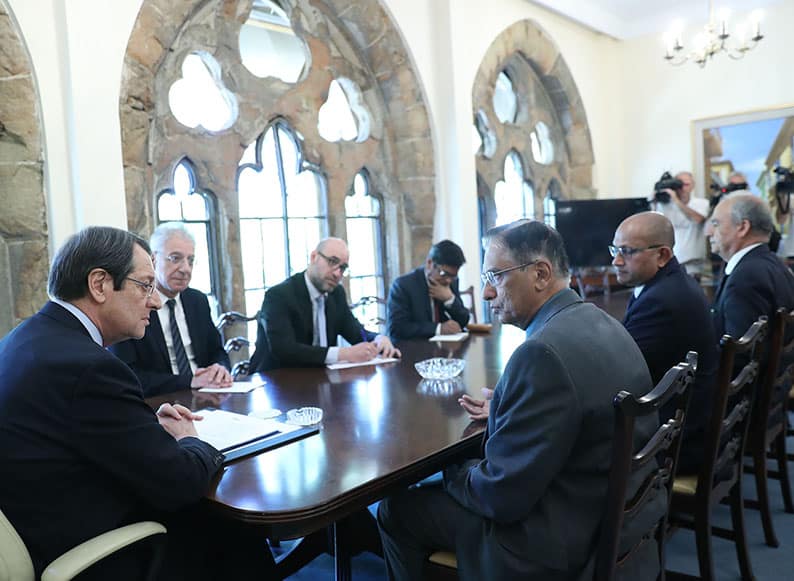 Diplomats from the home countries of female workers murdered in Cyprus have handed over suggestions on how to improve the lives of foreigners working here to President Anastasiades when they met with him on Friday.

The meeting was with the ambassadors of non-EU countries that have a sizable number of workers in Cyprus. Two of the women murdered by a serial killer were from the Philippines, along with the child of one of the two. The search is ongoing for a third Filipino woman. The fourth victim found was from Nepal and the remaining two were a mother and child from Romania.

According to India’s High Commissioner Raghavan who gave the document to the President, Anastasiades assured the diplomats he would take their suggestions into account and starting from Monday, extensive discussions will begin, decisions will be made and whatever actions are necessary will be taken.

He told them the government will take every possible step to build the confidence in foreign nationals here, workers from Vietnam, Sri Lanka, the Philippines and other countries

Asked to refer to details in the document, the Indian High Commissioner said that diplomats in Cyprus should know how many of their nationals work in Cyprus, especially those working in domestic settings.

“Right now we don’t have a clear idea so we suggested if there is better control whereby the missions of various countries get to know how many from their countries are here, how many work in domestic environments. There is a gap here that we pointed out to the president and the president was positive that this gap should be fixed and the foreign workers here have another avenue to go,” he said.

Asked if they were satisfied with the meeting, the Indian diplomat said he and his peers were moved by the president’s concern, adding they would brief their governments on the situation.

Government Spokesman Prodromos Prodromou told reporters the president conveyed his deep regret for the crimes and apologised on behalf of the state and the people of Cyprus to the representatives of the countries the victims come from. They also exchanged views on further improving the living conditions of workers from third countries in Cyprus.

Prodromou said it was significant that the diplomats acknowledge that this is an isolated event which does not correspond to the “very good conditions workers face in Cyprus”.

He confirmed that in future consular authorities will be more thoroughly informed about workers with a legal work permit in Cyprus, so they in turn can communicate more effectively with the state authorities.

At the next cabinet meeting, the president said decisions will be made which include giving the right to the Commissioner for Human Rights to handle cases concerning the living conditions and human rights of workers from third countries. Work related issues will continue to be handled by the competent ministry, the spokesman added.

At the same time, the president announced that a meeting of ministers responsible for third-country workers in the presence of the High Commissioner and consuls from these countries will take place to discuss suggestions which will further improve the cooperation between consular and diplomatic authorities and government services.

Turkey ‘not distancing itself from Nato’ with Russia missiles deal