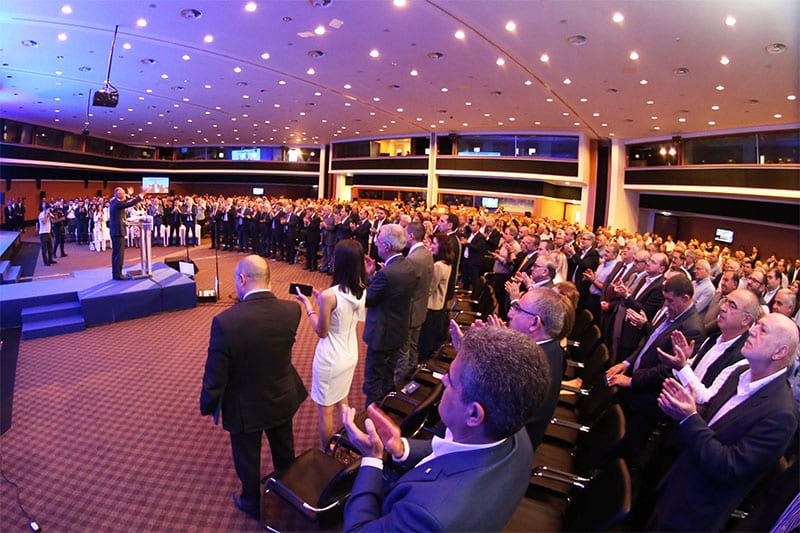 Ruling Disy, flanked by President Nicos Anastasiades, on Saturday launched a scathing attack against main opposition Akel, accusing the party of running the economy to the ground over six years ago and failing to apologise to the country for the munitions explosion in 2011 that killed 13 people.

Speaking before the party’s congress, Anastasiades and Disy leader Averof Neophytou also sought to put a dent in the candidacy of Turkish Cypriot professor Niyazi Kızılyurek who is running for the European Parliament on an Akel ticket.

Neophytou said Turkish Cypriot participation in the elections sent a clear message of respect and recognition of the Republic of Cyprus and disregard of the breakaway state.

“This is what their participation means. And I challenged Akel to tell Greek Cypriots and Turkish Cypriots clearly if it agrees with this position,” he said.

Neophytou suggested Akel was promising Turkish Cypriots that election of an MEP would mean representation of the Turkish Cypriot community in the European Parliament and lifting the embargo on the breakaway state.

A recent poll showed Akel closing the gap with frontrunner Disy, which could explain the onslaught and the references to Akel’s 2008-2012 administration.

Neophytou said Akel has adopted a dangerous practice in the past two years, launching daily attacks against the president and creating the false impression that it was the Turkish side that wanted a solution and Anastasiades was the obstacle.

“I hope this systematic, unwitting even, undermining of our side’s negotiating credibility stops after the euroelections,” Neophytou said.

He also accused Akel of bankrupting the country and having the nerve to accuse those who repaired it.

“We recognise that in the effort to improve the country we must first improve ourselves and our party,” he said.

Anastasiades also accused Akel of creating problems for the Greek Cypriot side, suggesting it was an effort to win votes.

“It could benefit the election campaign, they think they will win some Turkish Cypriot votes,” he said.

He reiterated that any “borrowed” Turkish Cypriot votes could not be counted as electoral support and called on Akel to set the country’s good over the party’s.

The president also accused Akel of trying to capitalise on the serial murders by politicising the issue but in doing so he committed a faux pas.

“The BBC saying we are racist because of what is heard and said. Because a psychopath committed a string of crimes. I have expressed my regret, I have expressed my apology, we dared to apologise regardless of the victims being foreigners. Some people didn’t want to and haven’t even apologised yet to the 13 heroes literally led to their death by their actions and omissions. And these are the people judging us.”

Responding, Akel said Disy and the president were in panic mode.

“The dark propaganda communicated only reveals panic. The only thing revealed by his (Neophytou’s) desperate effort to convince the large majority of his party’s disenchanted voters about the supposed achievements of the Anastasiades-Disy government is panic.”