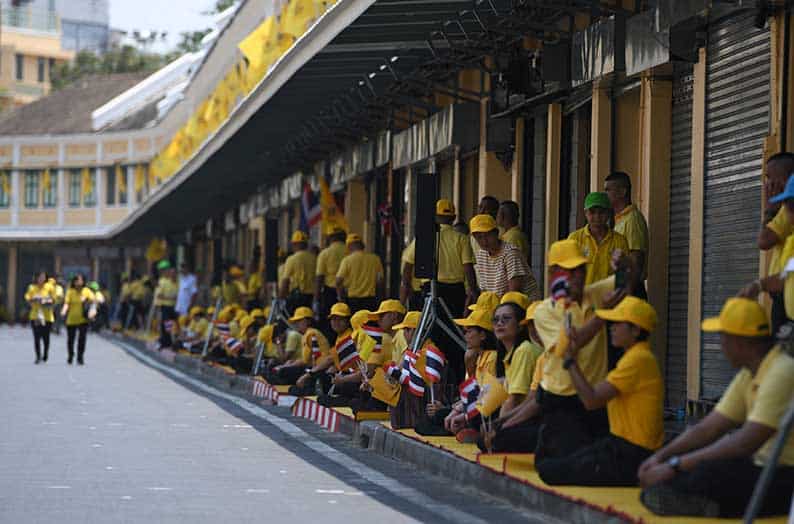 Crowds of Thai people lined roads under Bangkok’s blazing sun on Sunday for the royal procession of newly crowned King Maha Vajiralongkorn, hoping to get a glimpse of the constitutional monarch who is revered in Thai culture as a living deity.

Well-wishers all wearing yellow, the colour associated with the king, gathered along the 7 km (4 miles) route from the Grand Palace to three royal temples, where the monarch, who will be appearing in public for the first time since his elaborate crowning, will pay homage to each temple’s main Buddha images.

“I want to see the coronation for once in a lifetime because the last one when it happened I was still very young,” Samran Moryaidee, a 77-year-old man, told Reuters as he stood in the steamy heat.

The Thai government, which is spending 1 billion baht ($31.35 million) on the weekend’s coronation ceremonies, has said crowds of at least 200,000 people were expected.

“I feel like I have to be here to show the world just how much we worship the king,” said Donnapha Kadbupha, a 34-year-old woman, who had come eight hours early to make sure of her spot along the procession route.

The government laid on buses for people living outside Bangkok to come to witness the spectacle, and bus and train travel was free in the capital.

The coronation of King Vajiralongkorn, 66, takes place from Saturday to Monday after a period of official mourning for his revered father, King Bhumibol Adulyadej, who died in October 2016 having reigned for 70 years.

Saturday’s rituals took place within the walls of the Grand Palace complex, which also encloses the Temple of the Emerald Buddha.

His coronation comes amid the uncertainty of an unresolved election battle between the current military junta chief and a “democratic front” trying to push the army out of politics.

On Sunday morning, the king granted new ranks and titles to members of the royal family.

The monarch was joined by new Queen Suthida after a surprise announcement three days before the coronation that the thrice-divorced monarch had married for a fourth time.

One noticeable absence at the televised morning title-bestowing event was his older sister Princess Ubolratana, 67, who in February broke with the royal family’s tradition of remaining aloof from politics by announcing a surprise bid to run for prime minister.

The king later issued a public command calling her candidacy for an opposition party “inappropriate” and the Election Commission disqualified her candidacy. The party that nominated her was later banned from the election.

Princess Ubolratana, who gave up her royal titles when she married an American university classmate, has been at other coronation events.

One of the many official titles King Vajiralongkorn is taking is Rama X, or the 10th king of the Chakri dynasty founded in 1782.

Although most coronation ceremonies for Thai kings follow Hindu Brahmin traditions, some Buddhist elements were added by the monarch’s great-great grandfather King Mongkut, or Rama IV, because he spent 27 years in monkhood before inheriting the throne, scholars said.

“Because King Mongkut was a monk, he ordered that the procession should visit important Buddhist temples so the new monarch can provide alms to monks,” said Tongthong Chandransu, an expert on Thai royal rituals.

It was also during King Mongkut’s coronation that foreigners were invited to witness coronation ceremonies for the first time, scholars said. This will take place on Monday evening, the final day of King Vajiralongkorn’s coronation.

On Saturday, the king sat on a golden throne under a nine-tiered umbrella to receive royal regalia including a gold-enameled, diamond-tipped crown in ceremonies that mixed glittering pomp with solemn religious rites.

Saturday’s rituals, which were about transforming him into a “Devaraja”, or a divine embodiment of the gods, saw him purified and anointed with consecrated waters from 117 sources. The king also received and wore five articles of the royal regalia from the chief Brahmin, signifying full kingship.

“I shall continue, preserve, and build upon the royal legacy and shall reign with righteousness for the benefit and happiness of the people forever,” the king said in his first royal command, after placing the Great Crown of Victory weighing 7.3 kg (16 lb) upon his head.

The king also proclaimed himself the Royal Patron of Buddhism, and spent the night with his queen in the royal residence in the Grand Palace, as previous kings have done.

During 18 months of his reign so far, King Vajiralongkorn has moved to consolidate the authority of the monarchy, including taking more direct control of the crown’s vast wealth with the help of Thailand’s military government.

Thailand ended absolute rule by its kings in 1932, but the monarchy remains highly revered as the divine symbol and protector of the country and Buddhist religion

Tales from the Coffeeshop: Delayed resignations and all-round nastiness