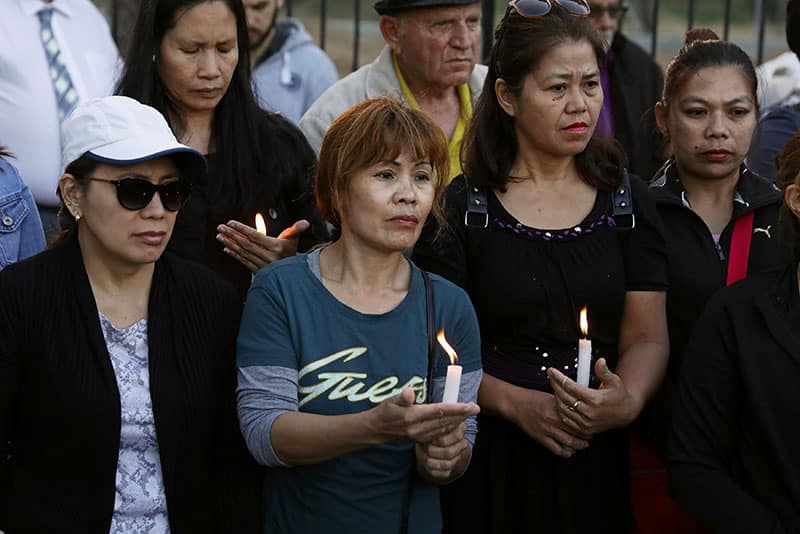 That domestic workers sometimes go to the north in search of better working conditions is no excuse for shoddy police investigations into the missing women believed murdered by suspected serial killer Nicos Metaxas, immigrant groups have said.

Since the five women and two girls, most of them on the police missing persons list, have been named in the confessions of the 35-year-old army officer as killed between 2016 and last year, the police have been vilified for not properly investigating their disappearances when they were first reported.

When the women and girls were reported missing to police by employers, friends and family, their fears were dismissed. They were told that the women had most probably crossed to the north as can happen when domestic workers leave their employers’ homes.

“Some women earn as little as €314 per month and have to work between 12 and 16 hours a day non-stop, sometimes starving, asked to clean two or three houses,” Esther Beatty, chairperson of the Federation of Filipino Organisations of Cyprus, told the Sunday Mail.

She added that in the north, Filipinas and Vietnamese can often find better opportunities and are also allowed to work in restaurants and beauty salons.

But in the case of Mary Rose Tiburcio, 39, from the Philippines whose body was the first to be found last month and who was reported missing with her six-year-old daughter in May 2018, the girl’s passport was found in her father’s home. His estranged partner Tiburcio did not take any of her personal belongings with her on the day of their disappearance. Nor did she take her passport, so how could she have gone to northern Cyprus?

Similar stories concern the other five victims, two more women from the Philippines, one believed to be from Nepal and a Romanian mother with her eight-year-old daughter.

Television footage showed that the house the mother and daughter were living in even had a bottle of medicine left on the table and their clothes were still in the wardrobe. This followed initial statements by the police at the time that the two had taken various personal items with them, indicating an intent to flee.

A Filipina domestic worker explained why northern Cyprus can become a more attractive option. When a domestic worker feels badly treated by her employer or if she knows her visa is about to expire and will not be renewed, she can cross to the north to find a job with the help of her contacts.

“They cross on Sundays when they have their day off and stay there and get a job,” said the woman, speaking on condition of anonymity. She added that once in the north, “they arrange their [working] visa in Turkey.”

The pay is usually better than in the south, she said, before conceding, “Some are lucky, some not so much.”

Those with expired visas cannot cross to the north, she said, but stay in the south illegally and work mostly as itinerant house cleaners.

Head of migrant rights group Kisa, Doros Polykarpou, said that there have been people that tried to encourage domestic workers after crossings opened in 2003 to seek employment in the north.

“Indeed, working conditions were better, pay was better and they were not obliged to work only at one employer as per the law in the south,” Polykarpou told the Sunday Mail.

The only problem in the north, he said, is when women find themselves in trouble as there is not sufficient protection from the law, “not that in our case things are much different for them.”

But just because a number of people chose to move to the north to work there, he said, is no excuse.

“This cannot be an excuse that whoever is reported as missing means they crossed to the other side.”
Polykarpou explained that if Cyprus police really wanted to investigate whether someone is in the north, there are ways of finding out through the United Nations as Turkish Cypriot authorities have records of who crosses to their side.

He dismissed the existing bicommunal technical committee on crime, set up supposedly to coordinate criminal investigations across the divide, as just an excuse for no further cooperation between the two sides.

He said that to deal effectively with such cases, “we either solve the Cyprus problem so that the police are able to fully carry out investigations all over the island, or we create some sort of mechanism of cooperation with the other side to address this and other serious problems such as human trafficking and organised crime.”

But beyond the paucity of the police investigation into the missing women, Polykarpou points to a system that actually forces domestic workers to seek other ways of making a living – such as going to the north – because they have so few rights.

If a domestic worker wishes to leave her employer, she has only one month to find work elsewhere, while she must also co-sign with her employer the ‘release form’ stipulating that none of them has any demands from the other.

“This is blackmail for the worker because even if the employer owes her back pay, she will have to forfeit that so that she is able to find employment elsewhere,” he said.

It means domestic workers end up leaving their employer and have to file for a labour dispute. It can take months, even years, for their case to be examined and in the meantime, they are left out to dry.

They also have difficulty in finding employment elsewhere since the state labour department refuses to let them register with the system, Polykarpou said, and they are forced to turn to private agents to whom they pay between €300 and €500 for their services.

“Agents usually send them from house to house until their month is up, or lead them on and, as a result, these women become very vulnerable to all sorts of exploitation,” he said.

Polykarpou said that the reason the state employment agency won’t accommodate these women is because of the powerful lobbying by the private job agencies that would lose an enormous turnover should they lose this business.

It is illegal for agents to get money from migrants, he said, so to avoid any paper trail migrants usually pay them in cash once they arrive in Cyprus.

Kisa recently had a meeting with state agencies, trade unions and the heads of the House human rights and labour committees to discuss the issue.

“They all say they recognise there is a problem but nothing is being done,” he said.

Kisa, he said, suggested a unit within the state employment services to serve domestic workers so that they won’t have to go to agents.

He also called for legal adjustments to allow domestic workers to report to the labour department without their complaint going through immigration as they do at present.

“At the moment, domestic workers are dependent on their employer and cannot claim their rights,” he said.

In other countries, he said, there is a ‘firewall’ allowing even undocumented migrants to go to authorities regardless of their status since their human rights are deemed more important. In Cyprus, he said, this only applies for victims of human trafficking.

Beatty said that when domestic workers find the courage to report cases of sexual harassment authorities call the employer and “they usually don’t believe the complainant.

“It is about time Cypriot society wakes up and starts realising their responsibility to their migrant workers,” Beatty said.

Following reports this week in the foreign media about the situation of domestic workers in Cyprus, the government issued a lengthy statement outlining the legal rights of third-country nationals saying that it “continuously strengthens its efforts for improving the working conditions of all non-EU national workers.” Peo trade union however, said the explanations the government “has attempted to provide” did not correspond to reality because the authorities show no willingness to take measures to tackle the problems, despite laws being in place.

How the ‘deep state’ operates at the CyBC

Our View: After 15 years in the EU we’ve learnt nothing