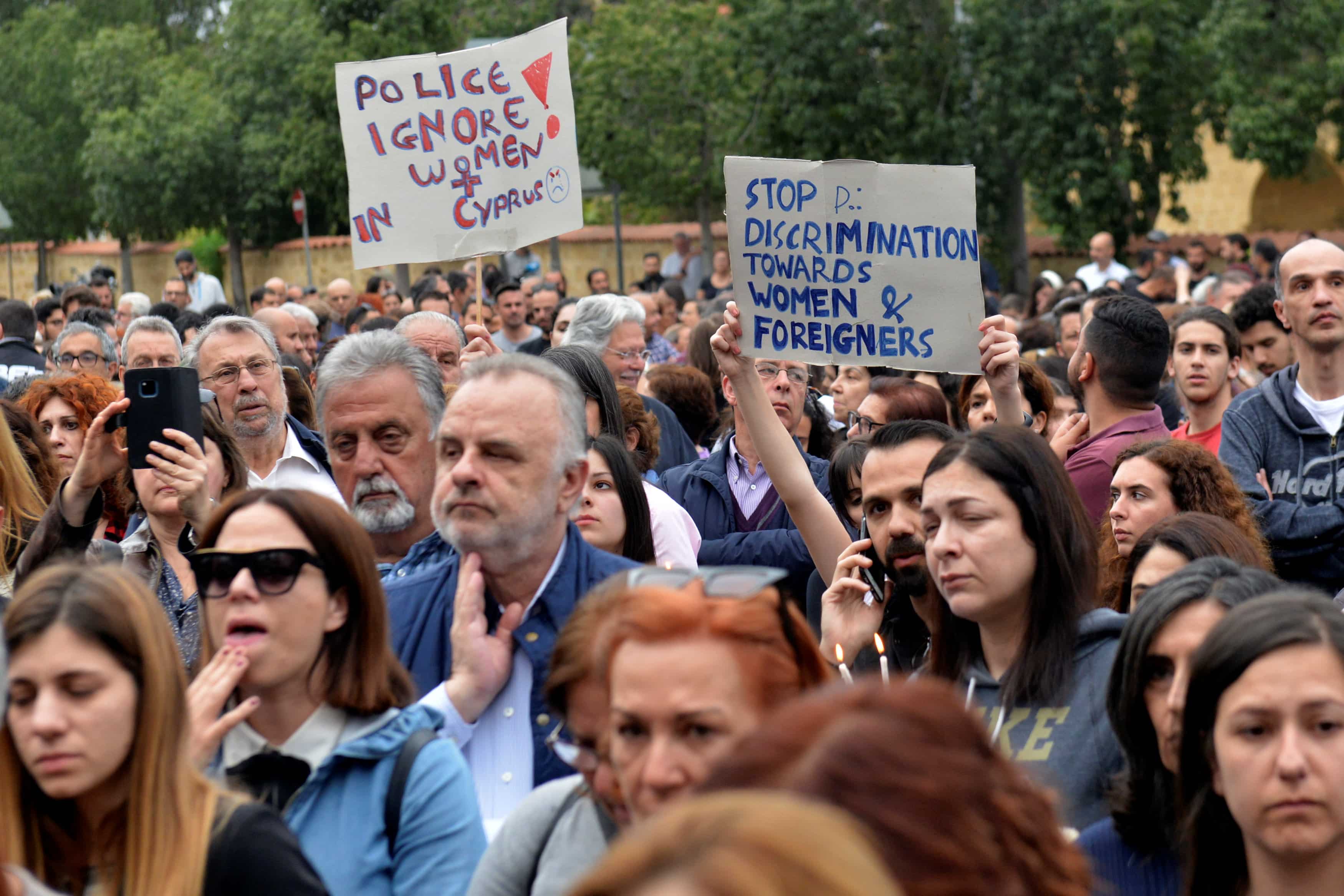 People attend a public vigil in memory of the victims of a suspected serial killer, outside the Presidential Palace in Nicosia, Cyprus, April 26, 2019. REUTERS/Stefanos Kouratzis

Last spring, I was at a UN-supported event listening to a group of Greek Cypriot and Turkish Cypriot women sharing their grievances over the Cyprus Problem. Finally, Lissa Jaatas the co-founder of Obreras Empowered, an association that promotes the rights of domestic workers in Cyprus, spoke and reminded the group of the horrendous discrimination and sexual violence faced by domestic workers on both sides of the divide. The room was quiet, some women shifted uncomfortably in their chairs while others left quietly because the ‘topic’ had shifted.

I couldn’t help but feel like perhaps that those in attendance had missed the point. That they felt the human rights violations happening in the present had no place in a discussion on unifying the island. The disconnect to me while absurd indicated that visible minorities are bodies that do not belong in Cypriot spaces unless in the home as caregivers. This is underlined repeatedly through racial and sexual harassment both reported and unreported. The impact that racialised women encounter in the context of violence has largely become a spectacle in the context of an ethnic majority that acts like the risks equals their own. This is indicative in the powerful backlash by the elites on the island claiming that the recent reports from international media have been unfair especially in the ‘over generalising’ of the abuse of migrant workers.

The reality is that we have all heard the stories of exploitation, that not everyone who hires a caregiver complies with the system and, as is evident in the current unfolding of events that drove the justice minister to resign, the system in Cyprus is made to benefit the few. The distribution of power across the ethnic divide prioritises men. The image of an ideal citizen in Cyprus is a male/white and is the protector of the nation: able-bodied, hyper-masculine, heterosexual and combat-ready. As such, in Cyprus, where heteronormativity and patriarchy make up the structure of society, issues surrounding gender and women’s rights are unimportant to the nation-state, which has run smoothly because the needs of male-dominated institutions are met, while the issues of all women’s rights, LGBTQ rights, the rights of migrant workers, and human trafficking, for example, remain irrelevant to the mainstream. They all continue to take a backseat to the Cyprus question.

The widespread outrage of a system built loosely on sand, and the utter shock amongst each community has generated a collective response that must push all communities living on the island to action. That the “normal rules of conduct and rights do not apply” in Cyprus is due to the normalisation of the divided island which has resulted in xenophobia and ethnocentrism, insecurity, fear and trauma as well as an inability towards an inclusive approach beyond the bicommunal rhetoric.

A massive shift into a system that has failed is imperative for a new era of hope to emerge. An investment in gender mainstreaming in immigration and asylum policies, regulations and practices to promote and protect the rights of migrant and refugee women can only begin when we begin to unpack privilege and truly understand what diversity and human rights actually looks like. Mapping how the cycle of domestication, exploitation in Cyprus requires further critical analysis to inform the lack of human rights for some and the respect for human rights for others.

Women’s rights on both sides of the island must include the needs of women refugees, migrant workers, and victims of human trafficking in order for a National Action Plan on Women, Peace and Security in compliance with United Nations Resolution 1325 to be written, approved and finally implemented.

In recognising women’s shared issues, the government finally has an opportunity to jointly address domestic violence, human trafficking, exploitation of women migrants and gender inequities through the development of accountability mechanisms. We need investment in monitoring and evaluation within a future National Action Plan on addressing gender-based violence, creating an inclusive and participatory environment that crosses political party politics and universally functions to uphold EU values and principles for all persons living on the island and not the select few. Cyprus is obliged to act on the Istanbul Convention on preventing and combating violence against women and domestic violence. All forthcoming decisions on the economic, social and political future of the island will require a wide network of alliances to break the vicious cycle of violence.

Finally, within our communities, it is important to stop centring the lives that have been so tragically lost as woke points. Civil society and academics have spoken, written and actively addressed the racism in our society over and over again for years. We all knew it existed.

. We all know that we live within a microcosmic system that functions only in first gear. Now is the time for guts and guile through listening to perspectives that are not yours and that make you uncomfortable: make spaces for voices that do not reflect your own.

It is also within these difficult and challenging times that each person shaken by this tragedy has been forced to look their greatest fears in the eye. We have all been complacent. Now is the time for Cyprus to be on the right side of history and to make history in taking the lead towards a human rights agenda that eliminates violence in all its forms and takes extreme measures to prevent violence against women, protect its victims and prosecute the perpetrators.

Sophia Papastavrou Faustmann, PhD, is a gender consultant for the Middle East and North Africa region

Cyprus gardens at their best

May has broken terms of Brexit compromise talks – McDonnell