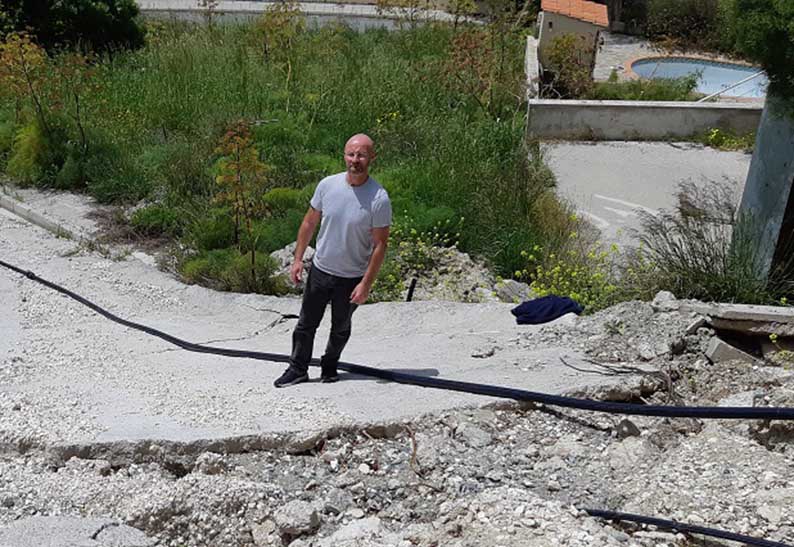 The long fight for compensation for the owners of crumbling homes in Limnes, Pissouri may be better known but it’s all too familiar for the single family holding on in Armou, Paphos

It’s hard to believe that anyone could live in such a way in Cyprus.

Roads are impassable, as huge sections have fallen away creating a steep drop; deep gashes are apparent in the road surfaces and the land is literally torn apart in places.

Land slippage in Armou gathered momentum in recent rains, moving downhill by at least 10cm a day, according to the only remaining residents of the development.

There is an eerie silence in the street, which is home to six substantial detached homes complete with swimming pools. The properties were only built in 2004 and yet they lie empty and abandoned as they are unfit for human habitation.

The location is stunning, right in the middle of the Paphos countryside; gorgeous outdoor terraces with commanding views and well-stocked gardens make it easy to understand why this was the ideal spot to buy.

Now those gardens have fallen away; plants, trees and shrubs are growing at will; garden gates have been pulled off hinges and most of the pools lie cracked, broken and empty.

It is truly shocking.

This is a dream location for many, including the unsuspecting British buyers that chose to make this area their home.

But now weeds grow unattended along the street. Some of the houses are tilted. Walls have broken apart, steps collapsed, drains and piles of buildings exposed and huge chunks of terraces lie crumpled.

Looters have struck, stealing air conditioning units, windows, doors and anything else they can lay their hands on. They must have made their getaway on foot, as it’s impossible to get a vehicle anywhere near the development.

And yet this is still home for one British family who have been fighting the authorities for the last eight years.

It has been a number of years since the Sunday Mail last visited the area, and it is shocking to witness the decline.

Simon Phillips, wife Jen and their two children are the only remaining residents of the development, trapped in a house which has had a ban order on it for the last eight years.

They have no choice, as all of their cash is tied up in the property. They bought it for 250,000 euros and moved to Cyprus with the idea of living mortgage free for the rest of their lives. They are unable to move due to financial restrictions and do not have available funds to rent another property.

The comparison with another crumbling complex of properties, the Limnes area of Pissouri, are obvious. There too homes have collapsed, the result of a continuous and accelerating landslip. Families have had to be evacuated.

Residents in Limnes are currently in a long battle for compensation, however, Phillips is seeking legal recourse with the government and is taking them to court.

“Taking the developer to court won’t result in any compensation, so I decided to take on the government. I will also request that the judge visits the site to see the situation for himself,” he told the Sunday Mail.

Phillips has a first hearing date scheduled for mid-May, but said he expects the case will be adjourned as the courts have so many cases backed up.

A number of the homeowners, who live mostly in the UK, have issued separate court proceedings against the developer. Phillips said one had won his case, but the developer, who is now no longer operating, has appealed.

Last month the auditor-general Odysseas Michaelides used the example of Armou as one of the reasons why the government should not compensate the Limnes property owners. He warned that if the Limnes owners won compensation, it would set a precedent for property owners in areas like Armou if the state essentially assumed the responsibility of the adequacy of the structural studies.

Phillips said that setting a precedent is actually the point.

“Something needs to be done. Action needs to be taken and put in place to ensure that permits are not given to build on land that is so obviously problematic,” he said.

“It’s like saying, ‘Oh we’re not going to punish any criminals because it will set a precedent.’ So in fact, they would be left to do it again.”
Heavy rains have doubled the problems with the Phillips house. It should never have been built as the area is not suitable for building, and it’s local knowledge that the hillside is historically known for land slips, said Phillips.

“The authorities gave a permit and changed the use from agricultural and this is negligent by the government.”.

The house next to Phillips is tilting at such an angle, it has moved down the hill by at least 12 metres. It is surprising it hasn’t totally collapsed and come crashing to the ground, he said.

Electricity wires were pulled off the side of his home recently, as the land movement caused an electricity pole to move. The EAC attended to make it safe, he said.

The couple’s two children, both girls, now aged 17 and 19, have grown up in Cyprus and have only known a house that has brought stress, fear and pressure.

“I haven’t been able to give the girls the childhood I so wanted for them. All they have known of Cyprus is this house. They can’t invite friends round and it has adversely affected all of our lives in such a huge way,” he said.

Phillips said that the couple has had to ‘dig deep’ to ensure their relationship survives the trails of living in such a way and added that it has affected all of their health terribly, both mentally and physically.

It is practically impossible for the family to access their home now. They have to climb the broken steps and carefully step from one broken chunk of concrete and tiles to the next, much like stepping stones across a stream. Underneath, there is a huge hollow in the ground.

Around three metres of the concrete piles under the house are exposed, the septic tank also lies exposed, and the next door garden walls have split apart with a huge 6 ft gap between. The land is moving so fast, shown by the marks the family made on one of the outdoor steps.

Since the start of the year, the four of them each has a bag full of essentials packed and left by the door, ready to make a hasty escape, if necessary.

Phillips said the family’s suffering must stop and the state needs to finally step up. He wants his original investment of 250,000 euros returned, as well as reasonable damages from the government. He is prepared to settle out of court if offered a suitable alternative property.

“We all need closure so badly after so long and to be given the chance to be able to live again. We started the court case in 2012, and seven years have gone by just to get a hearing,” he said.

Likely gas sharing deal is not to Cyprus’ advantage