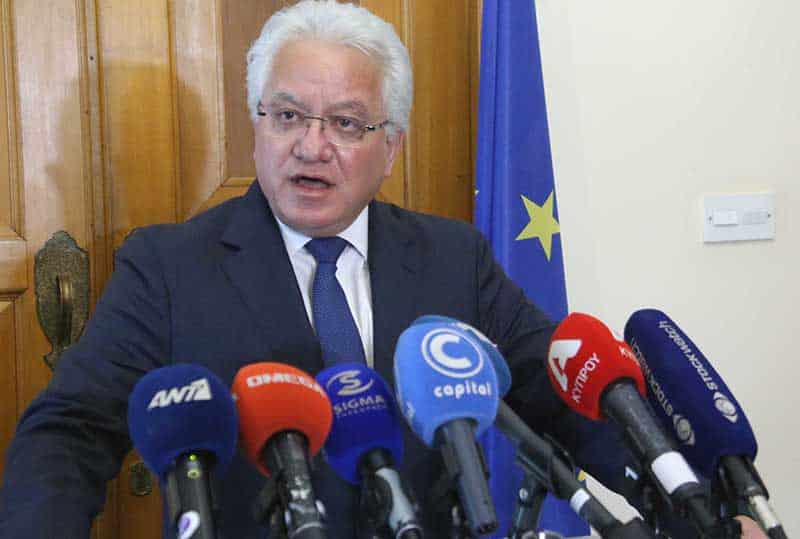 He will be missed: Ionas Nicolaou

RESIGNATION by public demand premiered last week, with Justice Minister Ionas Nicoalou grudgingly stepping down in order to silence the crowd demanding his head over the police failure to adequately investigate reports of missing women.
Ionas resigned “for reasons of political ethics alone,” making it clear that he had “no responsibility for the handling of the reports” by the police, who had never informed him about the cases. He had a point and his only responsibility was that he was politically in charge of a police force known for its laziness and lack of professionalism long before he was appointed.
It will probably remain the same long after Ionas has gone, whenever that is. This was another quirk of his resignation – it was not with immediate effect. As a disappointed Prez Nik explained afterwards, he had asked the minister to stay in his position a while longer (two weeks, months or years?) in order to bring the bills for the reform of the justice system to the cabinet.
If Ionas was writing the bills himself, you could understand this, but they were being drafted by the legal service which, surely, could have given them to someone else to take to the cabinet. Perhaps Nik, who admitted he “would be deprived of the services of one of his closest associates,” wanted to keep Ionas in his service for a little longer in order to come to terms with losing his services.

THE STRANGE thing was that in the case of his finance minister, Harris Georgiades, who was found politically responsible by an investigative committee for the collapse of the co-op bank, Nik ignored the calls by the media, the parties and the public for his resignation.
Why had he bowed to public pressure in the case of Ionas, who was only politically responsible for the police incompetence in theory? Harris did eventually announce he would step down at the end of the year, and I would not be surprised if that would be the time when Ionas finally brings the bills for the reform of the justice system to the council of ministers.
Resignations with time lags are all the rage, but they are an improvement on the resignation theatre employed by president Clerides in his time. Back then a minister under pressure would submit his resignation and Clerides would announce that he did not accept it.
Comrade Tof, in contrast, was pretty ruthless in extracting resignations from his ministers. There was never a possibility of him not accepting them and they were always with immediate effect. Only a president who set the highest possible standards of incompetence could be so unforgiving to the slip-ups of his ministers.

POLICE chief Zacharias Chrysostomou, showed none of the political sensitivity or ethics displayed by Ionas, obdurately refusing to tender his resignation to the president. Nik invited him to a meeting at the presidential palace on Friday in the hope of convincing him to step down voluntarily, but failed.
Not even the argument that he would salvage some dignity and pride by doing the honourable thing convinced him. Chrysostomou had much greater responsibility than Ionas for the serial murders but he felt no embarrassment let alone shame that his men showed utter disregard for the fate of impoverished, vulnerable, foreign women.
The reason for his shabby behaviour, according to sources at the presidential palace, was money. If he resigned he would not be able to claim unemployment benefit for the next six months, which was vital for him as he is only 53 and would not be entitled to his pension before he turned 55. It is not as if there would be employers lining up to give him a job.
This was why at Friday’s meeting he insisted that Nik sacked him. Do not be surprised if he also sues the state for wrongful dismissal and secures a hefty compensation for lost earnings as well. He is after all a public employee and committed no disciplinary offence that would justify his sacking. Incompetence or inadequate leadership are not sackable offences in the public service.

UNTIL Friday, the attorney-general’s office had steered clear of the murders of the foreign women and two children. In fact, when this gruesome story was unfolding Sigma, quoting “very high sources” at the state legal service, reported that the police never asked the opinion of the AG about the disappearance of the women.
On Friday, however, Politis reported that case files on three women who were subsequently found murdered were sent to the state legal service for instructions by the police. The office sent the files back to the police with the instruction to “otherwise dispose” which meant no action was necessary – the case file had to be archived.
It is entirely possible that AG Costas Clerides was not informed about the cases and these had been dealt with by one of his underlings, but was he not politically responsible, like Chief Chrysostomou and Ionas, for the failings of the staff at the state legal service he is in charge of? In fact the chief could claim that the police did not pursue the case because of the instructions they had received from the state legal service.
After the Politis report the state legal service issued a statement admitting that files of three cases concerning missing women that turned out to have been murdered had been sent to it and it had given the “appropriate” instructions based on the contents of the police reports.
Should we conclude the lawyers at the state legal service treated the cases of the missing foreign women with the same disdainful sloppiness displayed by the cops but in this instance nobody was politically or otherwise responsible?

IN ITS announcement the legal service said that with regard to the first case the police recommendation was to archive the case as it was not of a police nature and “it is highly possible they (Livia Bunea and her daughter) are residing at an unknown address in the occupied areas.”
Would a conscientious lawyer not have the professional curiosity to at least ask the cops how they developed the theory the mother and child were living in the north especially as her friends and neighbours insisted she was missing and a journalist had taken up the case as well?
The legal service’s conclusion was the following: “In light of this, considering no other reasonable suspicion emerged from the investigation, instructions were given to archive the case without ceasing efforts to find the missing persons.” What chances were there of the efforts continuing once the case was archived?

ARCHBISHOP Chrysostomos exhibited colossal callousness in his Easter message last weekend when he failed to utter a single word about the murders of the foreign women; not even a routine word of of sympathy for the victims and their relatives. His message of love was directed instead at the traitors who engaged in “transactions with the occupation for fun.”
His message would have been applauded by the fascists of Elam that have been calling for the closing of all the checkpoints for some time now. Incidentally, like the Archbishop the fascists avoided saying a word about the murders of the foreign women. Elam normally issues a statement about every triviality imaginable but had no view to share with us about the murder of foreign women by a National Guard officer.

PREZ NIK scaled new heights of insensitivity on Saturday when he tried to win political brownie points on the back the serial murders. Speaking at the Disy conference, he said: “I have expressed my sorrow, I have said I am sorry, we dared and asked forgiveness, regardless of the fact the victims were foreigners. Some did not want to and did not say they are sorry yet to the 13 heroes whom literally through their actions and omissions led to their death. These are the people judging us.”
This was a reference to the commies of Akel – that have been critical of the government’s handling of the murders – and their stance towards the victims of the Mari explosion. It was an offensive outburst that you would expect from some drunken yob rather than from your president. Who else would boast about saying sorry about the murder of innocent women, and present it as some act of bravery (“we dared and asked forgiveness”)?
We must congratulate Prez Nik, for this courageous show of human sentiment for women that were not even Cypriot.

DELUSIONS of grandeur have always been the currency of the columnist of our leading daily Phil. Last weekend one of the most zealous exponents of these delusions, Michalis Ignatiou, wrote that “two of the best plots of land in the world are Cyprus and Greece”.
To substantiate this claim, Ig quoted former US secretary of state Henry Kissinger as supposedly saying “whichever superpower controls Cyprus, Crete, Malta and Gibraltar, calls the shots in the world.” The superpower may call the shots in the Mediterranean Sea, but Kissinger failed to explain to Ignatiou’s source how controlling Cyprus, Crete and Malta allows it to call the shots in Asia or the Americas.
Kyproulla might be prime real estate, one of the best plots in the world, as Ignatiou concluded, but Kissinger may have overestimated its value. He was after all an academic, statesman and diplomat, not an estate agent.
Here is another smart thing Kissinger actually said, but not to a friend of Ignatiou: “If you don’t know where you are going, every road will get you nowhere.”

Our View: After 15 years in the EU we’ve learnt nothing

Is the G7 tax agreement a threat to Cyprus’s foreign direct investment?