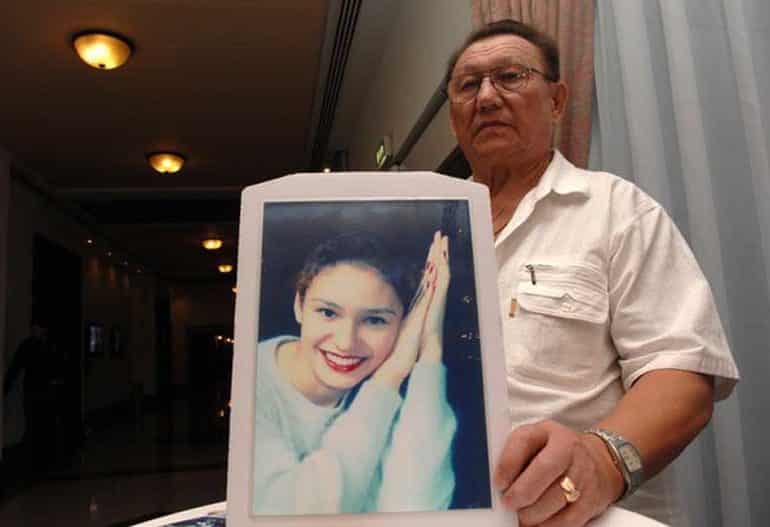 Russian father Nikolai Rantchev holds up a portrait of his dead daughter Oxana at a hotel in Nicosia on November 20, 2008, during a conference on human trafficking. Only days after Oxana Ranchev left Russia for the Mediterranean island of Cyprus duped into thinking she would work as a translator, her lifeless body was found slumped at the foot of a building. Her father, former Soviet army officer Ranchev, believes she was killed by human traffickers who wanted to turn the honours student into a sex slave by forcing her to work as a prostitute in a local cabaret. AFP PHOTO/STEFANOS KOURATZIS (Photo credit should read STEFANOS KOURATZIS/AFP/Getty Images)

One can only imagine the desperation that leads migrant women to end up as resident domestics and cabaret artistes in servitude to poseurs and pimps in the Middle East and Cyprus.

The truth is that these migrant women are treated as non-persons in this part of the world. Many people discriminate a little bit – some more than others – but when a society treats other people as untermensch – Nazi jargon for subhuman – that society has a big problem on its hands.

The police treated the murdered migrant women as if their disappearance did not matter in the way it would have mattered if five Cypriot women and two little Cypriot girls had gone missing.

The police have done this before but as usual, no lessons were learnt. The tragic story of the short life of Oxana Rantseva who fell to her death in Limassol in 2001 tells it all. It needs to be retold because her death was a direct result of the same indifference borne of the same attitude problem that treats migrant women as non-persons.

The police treated Oxana as if she were the slave of the cabaret owner for whom she had come to work. But she was no slave. She resisted and ultimately chose freedom or death and died for her choice. If it were within my power, I would commission her statue and place it on a pedestal in the middle of Limassol’s Heroes Square.

Oxana defied slavery and died escaping the tentacles of traffickers and pimps.

I take the facts of her case from the law report of the European Court of Human Rights before which Cyprus and Russia were both in the dock – Cyprus as principal and Russia as an accessory.

Oxana arrived in Cyprus on March 5, 2001, to work as a cabaret artiste on a work permit that bound her to the cabaret owner as if she were his slave. She began to work a week later but after a couple of days she realised that a cabaret artiste in Cyprus is a euphemism for sex worker, so she left the apartment where she was quartered with other girls, leaving a note in Russian saying that she was tired and wanted to return to Russia.

A couple of weeks later Oxana was at a discotheque in Limassol from where she was abducted by the cabaret owner and taken to Limassol central police station where she was handed over to two police officers.

The police officers contacted immigration to check if Oxana was illegally in Cyprus. The advice was that she was not illegally in the country but instead of letting her go free, the police sub-contracted her detention to the cabaret owner so he could have her processed for removal from Cyprus the following day.

The cabaret owner then took her to the apartment of a cabaret employee where she was detained on the fifth floor of a block of flats. She was locked in a room with an adjoining balcony.

Oxana was found dead on the street below the apartment early that morning. The police found a bedspread looped through the railing of the balcony adjoining the room in which Oxana had been staying.

The autopsy in Cyprus showed that the injuries she suffered resulted from her fall and that the fall was the cause of her death. An inquest followed in the Limassol district court in late December 2001. The coroner found that “at around 6.30 on 28 March 2001 the deceased, in an attempt to escape from the apartment and in strange circumstances, jumped into the void as a result of which she was fatally injured.” Oxana Rantseva died in circumstances resembling an accident, in an attempt to escape from the apartment in which she was a guest – εφιλοξενείτο – a shameful abuse of the Greek language.

The Russian version of the nature of her injuries was very different.  The autopsy report from Russia showed “that the traumas happened while she was alive as well that they happened not very long before death, within a very short time period, one after another.’ In other words, she had been assaulted before she fell to her death.

Unsurprisingly the Russian Federation requested the Cypriot justice ministry to institute criminal proceedings for Oxana’s death as the Cypriot coroner’s verdict of December 27, 2001, that her death was an accident made no forensic sense owing to the finding that she was trying to escape from the flat, where she was being held against her will.

Cyprus’ response came from the officer who had attended the scene on March 28, 2001. He said that all the evidence was taken into consideration by the inquest and reiterated that the inquest had concluded that there was no indication of criminal liability for Oxana’s death. He concluded that “the deceased did not want to be expelled from Cyprus and because her employer was at the entrance of the flat where she was a guest, she decided to take the risk of trying to climb over the balcony, as a result of which she fell to the ground and died instantaneously.”

But once proceedings were in progress before the European Court of Justice, in an attempt to kill the case, Cyprus made a unilateral declaration admitting that the decision of the police to hand her over to the cabaret owner violated Cyprus’ positive obligation towards Oxana to take preventive measures to protect her life from the criminal acts of the cabaret owner.

The government acknowledged that it violated its positive obligations to Oxana arising out of the prohibition of slavery in that it did not take any measures to ascertain if she had been a victim of trafficking in human beings, and may have been subjected to sexual or any other kind of exploitation, and that there was no basis for her deprivation of liberty in breach of her right to liberty

The European Court of Human Rights of seven judges that included a Greek judge as president, a Russian judge and my old friend, judge George Nicolaou sitting as the Cypriot judge, rejected this belated attempt to escape censure. They went on to hold Cyprus in violation of the procedural of obligation of the right to life because of a failure to conduct an effective investigation into Oxana’s death. They also held Cyprus in violation of her right to protection from slavery by not affording her practical and effective protection against trafficking and exploitation; and a violation of her right to liberty.

Russia was held in violation of its procedural obligations to investigate alleged trafficking contrary to its right to protection from slavery.

The court’s findings are an embarrassing verdict on the attempt to kill the case by the government of Cyprus because, in the event, the court found no violation of one of the rights to which Cyprus had actually pleaded guilty.

But that’s another story – the nagging question that still persists is who polices the police? Or, to give it its Latin tag: quis custodiet ipsos custodes  – literally who guards the guardians? Because the police have messed up yet again – big time this time.

How the ‘deep state’ operates at the CyBC