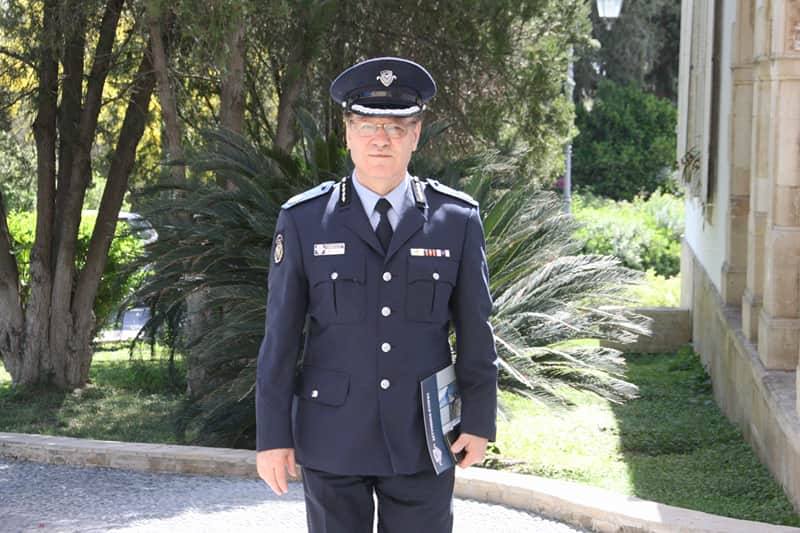 Deputy police chief Kypros Michaelides has been appointed as the new police chief after his boss Zacharias Chrysostomou was sacked on Friday over the serial killings’ fiasco.

Michaelides was at the presidential palace on Monday morning just prior to the start of the cabinet meeting. The official announcement of his appointment came a short while after midday.

The swearing-in ceremony of the new chief will take place on Tuesday at 8:30 am at the presidential palace.

Michaelides was born in Paphos in 1957. After completing his military service he joined the police in April 1977 as a special constable.

According to the police website, he served as a constable in various departments, branches and services, including the security office at police headquarters, the, the presidential guard, as well as the prosecution office of Nicosia Divisional Police. For several years he also served in Nicosia CID.

In 1990, he successfully completed a two-year Turkish language course at the police academy while serving with the Central Intelligence Service Kyp.

During 1990 he was promoted to the rank of sergeant and between 1993-1999 he served as a trainer at the police academy.

In December 1999, at the rank of inspector, he served in CID at headquarters, and in 2003 he was promoted to chief inspector.

The palace said it was replacing Michaelides as deputy chief with assistant chief of police for operations Stylianos (Stelios) Papatheodorou.

Stylianos Papatheodorou is the son of a priest and member of a large family, according to his bio on the police website. He was born in 1971 and grew up in Meniko. He was recruited to the police in 1990 and has served in various departments and services, including the Criminal Investigation Department (CID), the prosecution branch of Nicosia police division, the Cyprus Police Academy, Famagusta police division, the office of the chief of police, as well as the department of administration and human resources.

During the last nine years and up until recently, he was the director of the European Union and International Police Cooperation Directorate.

Papatheodorou holds a degree in Law from Aristotelion University in Thessaloniki and has passed the examination set by the Legal Council. He also holds a master’s degree in public administration from the University of Cyprus and is a graduate of the FBI Academy.

President Nicos Anastasiades on Friday dismissed the chief of police over the force’s perceived failures to properly investigate the cases of missing women in the past three years who eventually turned out to be victims of a serial killer.

The dismissal, which is effective from May 7, was announced in a letter to the chief published by the presidency.

In his letter to the chief, the president said the apparent lapses in the investigation of missing persons reports that resulted in the failure to detect and possibly prevent the atrocious crimes that shocked Cypriot society led him to “the unpleasant decision to terminate your services as chief of the Cyprus police force.”

Anastasiades said the person in charge of an authority, even if they do not bear personal responsibility, is called on to assume the responsibility of restoring its prestige, which was hurt as a result of their subordinates’ actions.

Zacharias Chrysostomou had met the president on Friday morning, a day after Justice Minister Ionas Nicolaou resigned for the same reason.

Measles resurgence prompts authorities in Germany and the US into action

Paphos safe from relegation as Paralmni and Doxa fight for survival