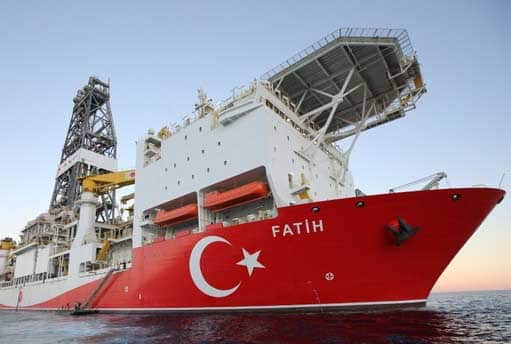 President Nicos Anastasiades on Monday likened Turkey’s actions inside the island’s exclusive economic zone (EEZ) to a second invasion, as Nicosia sought an international arrest warrant for the crew of a Turkish vessel said to be poised to commence drilling for hydrocarbons.

“It is clearly a violation of international law, or, as I could describe it, a second invasion, considering the violation of the Republic of Cyprus’ Exclusive Economic Zone,” he said last night.

The president said the government’s actions were in line with a policy that had been drafted in light of the dangers from any Turkish threats.

“It is impossible for anyone to speak of peace under threat. And not just threats but an active violation of international law for the umpteenth time.”

Turkish President Tayyip Erdogan remained defiant on Monday, saying he expected NATO to support his country’s rights in the eastern Mediterranean, despite the United States and European Union voicing concerns over Ankara’s plans.

“The legitimate rights of Turkey and the northern Cypriot Turks over energy resources in the eastern Mediterranean are not open for argument. Our country is determined to defend its rights and those of Cypriot Turks,” he said. “We expect NATO to respect Turkey’s rights in this process and support us in preventing tensions.”

Earlier on Monday, Foreign Minister Nicos Christodoulides said Nicosia was taking diplomatic steps to respond to Turkey’s latest incursion and was also seeking an international arrest warrant for the crew of the Turkish vessel.

Speaking to reporters after a cabinet meeting at the palace, Christodoulides dismissed the notion that Nicosia was caught off guard by the appearance of the Turkish drillship Fatih in waters to the west of Paphos.

“The necessary preparatory work was done by the Republic of Cyprus in relation to Turkey’s illegal actions in the Cyprus EEZ, and this is evident from the immediate and clear reaction of the EU,” Christodoulides said.

The government, he added, is in constant communication with the European Commission as well as with EU member states.

“Yesterday I spoke with the EU Commissioner for Enlargement, I’ve had contact with important capitals of EU member states who are conveying particular interest in the illegal acts within our EEZ, and tomorrow I shall be in Paris where this issue will be the top item on the agenda of my meetings there.”

European Parliament President Antonio Tajani expressed concern over the developments and called on Turkey to refrain from illegal activities in Cyprus’ EEZ.

“Turkey’s intention to drill within the EEZ of Cyprus is a violation of international law,” he said. “The Republic of Cyprus has the full and sovereign right to explore and exploit natural resources within its EEZ. We stand with Cyprus in safeguarding its rights underpinned by international and European law.”

On Thursday Anastasiades will brief his European counterparts at the informal European Council to be held in Romania, Christodoulides said.

“At the council, discussion will take place on specific actions on the legal, political and diplomatic levels which have been set in motion for a while now.”

The president has also called a meeting of the National Council on Saturday to discuss the situation.

Last Saturday Cypriot authorities submitted to the United Nations the coordinates for the boundaries of the EEZ and the continental shelf, based on the median line that is equidistant from the shores of Cyprus and Turkey.

The coordinates would also be published in the government gazette, giving them the force of law.

Christodoulides was asked why this had not been done before.

He said that all administrations since 2004, based on advice from international law experts, had opted not to submit to the UN the coordinates for the EEZ and continental shelf, as that might have been used by Turkey as a pretext to engage in provocations.

At any rate, Cyprus’ rights over its continental shelf are ipso facto, that is to say, automatic. There is no question over the rights of the Republic, the foreign minister stressed.

In July 2014, he recalled, parliament passed a law specifying that the Cyprus maritime boundaries for the EEZ lie at the median line between the shores of the island and Turkey.

“The coordinates merely denote the median line with greater precision,” he offered.

On how actual Turkish drilling in the EEZ might be averted, Christodoulides said efforts would be focused in the EU sphere, where Cyprus has a comparative advantage.

One course of action might be to ask for a revision of the EU-Turkey customs unions, or blocking Ankara’s access to EU pre-accession funds.

The EU, the United States, Russia and the United Kingdom have already released statements expressing concern that Turkey’s latest action offshore Cyprus may stoke tensions in the region.

Rejecting remarks by Federica Mogherini, the High Representative of the EU for Foreign Affairs and Security Policy, the Turkish foreign ministry reiterated that Ankara will carry out the drilling “in line with its legal rights stemming from international law.”

Meantime, with assistance of neighbouring nations, Nicosia is monitoring the movements of the Fatih drillship.

The latest information indicates that it has not started drilling.

According to Christodoulides, the government has for some time been well aware of Turkish intentions to conduct drilling offshore Cyprus, given repeated statements to that effect from Turkish officials.

Until recently, Turkey had been unable to carry out drilling operations because they were unable to find oilfield services companies to assist them.

That has now changed.

“It is a negative development with serious ramifications,” the foreign minister noted.

Although it was possible that foreign corporations were participating in the Turkish drilling operations, he ruled out any participation by any country on a government level.

Also on Monday, authorities began procedures to have an international arrest warrant issued for the crew of the Turkish drillship.

An application for a warrant was submitted on Monday to Nicosia district court, Undersecretary to the President Vasilis Palmas told a local radio station.

Depending on the court’s decision, Cypriot authorities would then relay the international arrest warrant to Europol.

On Friday, Turkish authorities issued a Navtex (navigational telex) advising that the drillship Fatih would be carrying out ‘drilling operations’ in an area west of Paphos from May 3 to September 3.

The Fatih is being supported by three other vessels.

Turkish media on Saturday cited Turkey’s Foreign Minister Mevlut Cavusoglu as saying the Fatih had started drilling in areas for which northern Cypriot authorities had issued a permit.

MarineTraffic, a vessel tracking website, shows that the Fatih is currently stopped, at a location some 60km west of Paphos and a latitude just north of Peyia.

Over the weekend authorities transmitted via Radio Cyprus a navigational warning to the Fatih, advising its crew that they are “conducting illegal operations in the exclusive economic zone and the continental shelf of the Republic of Cyprus.

“Your actions are violating the international law and maritime safety procedures and you are committing serious criminal offences under the laws of the Republic of Cyprus.”

Turkey responded with a broadcast describing Radio Cyprus as an “unauthorised station”.

Although technically the Turkish drillship is operating in the Cypriot EEZ, it is located in an area that has not been licensed by Cyprus for hydrocarbons exploration.

Citing unnamed government sources, daily Politis said that about six months ago the foreign minister had invited Ankara to engage in dialogue to delimit the respective EEZs of the two nations.

Turkey rejected the approach, on the grounds it does not recognise the Republic of Cyprus. The Turkish response was given in written, the same report said.

Sacked chief blames parties for many of police force’s problems