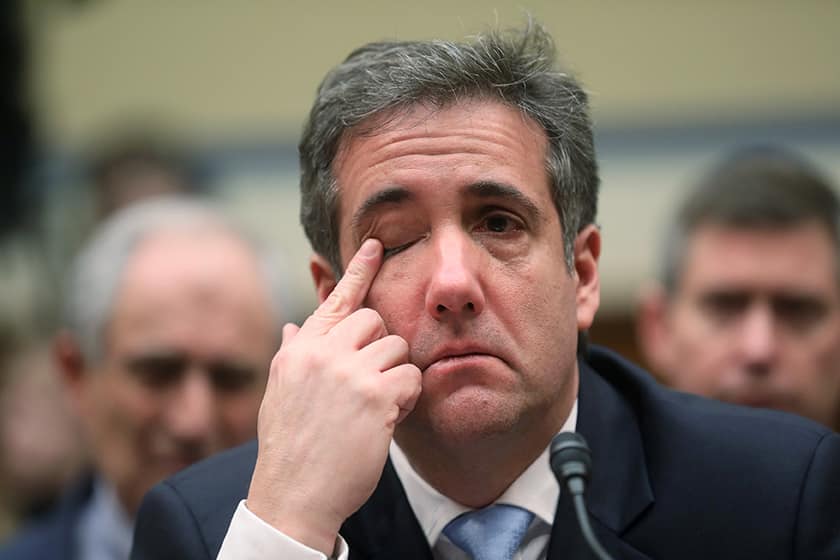 Cohen, who once vowed to “take a bullet” for Trump but now calls him a “con man,” arrived at the Federal Correctional Institution in Otisville, New York, about 110 km northwest of New York City to serve his sentence for arranging hush payments to two women who said they had sexual encounters with Trump and for lying to Congress.

Cohen was seen being driven in a black SUV into the front entrance of the prison grounds shortly after 11:30 am (1530 GMT), some 2-1/2 hours before his deadline to report. The vehicle stopped and was approached by law enforcement officers, who appeared to speak to its occupants for several minutes. It then drove on, out of view.

Before being driven to the facility, Cohen made brief remarks to a crush of camera crews and reporters gathered on the sidewalk outside his Manhattan apartment building.

“I hope that when I rejoin my family and friends that the country will be in a place without xenophobia, injustice and lies at the helm of our country,” Cohen said. “There still remains much to be told, and I look forward to the day that I can share the truth.”

Cohen, 52, was dressed in jeans, sneakers, a white shirt and a navy blue blazer as he exited the Trump Park Avenue building, with a doorman holding the door as he departed.

Several dozen bystanders stopped to take pictures and one shook his hand. As Cohen began to leave after making his remarks, the scene became chaotic, with equipment and people falling to the ground. Cohen helped one journalist who had fallen to get back on his feet. Cohen then climbed into the back seat of a black vehicle and was driven away.

Cohen is expected to stay at the prison’s minimum security camp.

Cohen’s prison term completes a stunning fall for the native of New York’s Long Island whose career was tethered to Trump as he evolved from wealthy real estate developer to reality TV personality to politician. For more than a decade, Cohen served as Trump’s personal lawyer and self-described “fixer.”

The relationship began to sour after FBI agents raided Cohen’s Rockefeller Center office and Park Avenue hotel room in April 2018 as part of an investigation that grew out of Special Counsel Robert Mueller’s investigation into Russian interference in the 2016 U.S. election. The information gathered in the raids contributed to a series of criminal charges against Cohen that caused his dramatic split with Trump.

Lanny Davis, a spokesman for Cohen, issued a statement on Monday praising Cohen’s “courageous decision … to tell the truth about why Donald Trump represented a danger to our Constitution, our freedoms, and our nation’s fundamental values.” Davis said Cohen “will continue to be accessible to Congress and to federal, state and local law enforcement.”

“I will continue questioning why Michael is the only person within the Trump Organization to be prosecuted for crimes committed at the direction of and for the benefit of Mr. Trump,” Davis added.

Cohen publicly broke with Trump in July 2018, telling ABC News he intended to put family and loyalty to his country ahead of the president. Cohen and his wife, Laura Shusterman, 49, have two adult children, Samantha and Jake.

In congressional testimony in February, Cohen said, “I am ashamed that I chose to take part in concealing Mr. Trump’s illicit acts rather than listening to my own conscience. I am ashamed because I know what Mr. Trump is. He is a racist. He is a con man. He is a cheat.”

During his sentencing in December in New York, Cohen said, “My weakness can be characterized as a blind loyalty to Donald Trump, and I was weak for not having the strength to question and to refuse his demands.”

Trump has blasted Cohen, calling him a “bad lawyer and fraudster.”

Cohen pleaded guilty in August 2018 to violating campaign finance law, bank fraud and tax evasion in a case handled by federal prosecutors in New York. Prosecutors said Trump himself directed illegal payments orchestrated by Cohen to adult film star Stormy Daniels and Playboy model Karen McDougal to avert a scandal shortly before the 2016 election. Cohen told the court Trump ordered a $130,000 payment to Daniels and a $150,000 payment to McDougal to keep them quiet.

Trump has denied sexual relationships with the women and said he never directed Cohen to do anything illegal.

Cohen also pleaded guilty to lying to Congress about a proposed Trump tower project in Russia that was being negotiated at the same time he was running for president.

US District Judge William Pauley in Manhattan sentenced Cohen to a total of three years for all of his crimes.

Cohen’s prison time could be reduced by about 15 per cent for good behaviour.