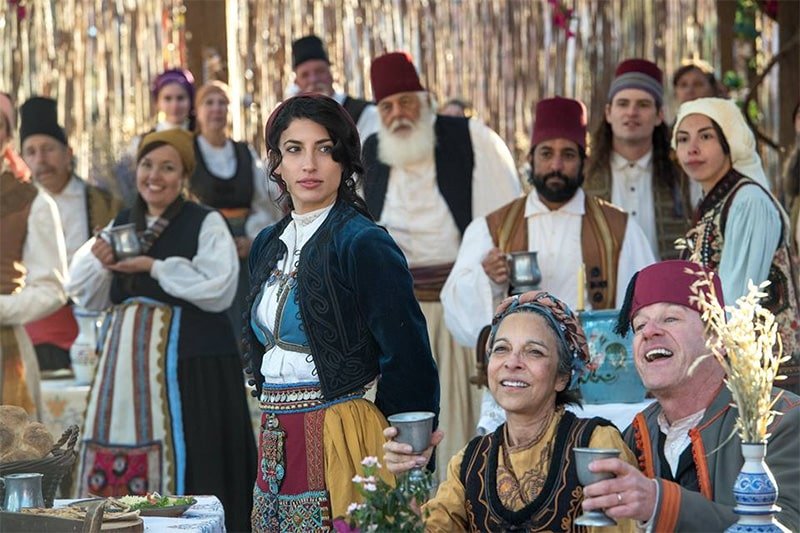 Why get angry? This is what diasporas do. The Armenian diaspora did it a couple of years ago with The Promise, a film re-enacting the Armenian genocide of 1915 – and now the Greek-American diaspora (led by writer-producer Marianne Metropoulos, wife of billionaire Dean Metropoulos) does it for the Greek war of independence that began in 1821. The result is Cliffs of Freedom, the stirring tale of Maria Christina (Tania Raymonde) who loses almost all her family to the Ottoman swine, then – having shortened her name to just ‘Christina’ – becomes a warrior and a legend, meanwhile falling in love with broodingly handsome Tariq (Jan Uddin) who is both a colonel in the Ottoman army and that almost unheard-of rarity, a good Turk.

Cyprus is the worst possible market for this movie – though Greece, I assume, would be just as bad. This is a film made for Astoria or Greektown, or whatever the Greek neighbourhoods are called in Melbourne or Toronto – a film for doting diaspora grandparents to watch with their impressionable grandkids. Pappou will talk about the old country and have a little snooze as the 137-minute running time wears on, Yiayia will remark that her own yiayia used to read coffee cups too, like the yiayia in the movie, while 10-year-old Hector will look up from his iPhone long enough to nod appreciatively at the occasional slit throats and lopped-off heads (which are actually a little too graphic for Hector, a reminder that director Van Ling has a background in special effects). Everyone will feel like they’ve gotten in touch with their heritage, and no-one will mind how stultifyingly bad the movie is.

It’s bad, that goes without saying – bad from the opening caption and scene-setting voice-over, the latter delivered with a plummy English accent in a voice rendered tremulous by emotion. A prologue shows Maria Christina’s aunt sacrificing herself for the Cause. “Look at my face, Turks!” she commands; “You will never conquer us!” she spits, then actually spits on the ground for emphasis – then dances a Greek dance and jumps off a cliff, like the famous women of Souli. These, I assume, are the cliffs of freedom, though the Turkish captain is unimpressed by Greek women leaping to their deaths so dramatically. “Who are the barbarians here?” he asks pointedly, clearly aware that Turks, by and large, have a bad rep.

That sardonic captain isn’t Tariq, of course. Tariq is wise and charming, and knows just what to say to a lady. “Even with a weapon, I stand disarmed,” he tells MC, having come upon her alone in the forest, and she feels her hatred of Turks melting away. “Are we really so different, you and me?” she sighs later, as they sit together with the sun hanging low in the sky and soupy music flooding the soundtrack. The film keeps finding ways to get them alone together – even as their paths diverge pretty sharply in the second half, Tariq stuck in the court of a skirt-chasing emir while Christina joins the rebel army led by a spy named Stavros. It’s obviously not the film’s fault that repeated mentions of Stavros made me think of Harry Enfield – though you’d think someone in Astoria might’ve seen Monty Python’s Life of Brian and avoided po-faced dialogue like “Observe the cheesemaker’s activities”. To slightly paraphrase that Roman matron: “What’s so special about the cheesemaker?”.

Then again, what’s a little more cheese to such a resplendent fondue of the stuff? We reel at the convoluted lines, and spend many happy moments gawping at the Turks and their elaborate headgear (the cobra headbands of ancient Egypt seem to have made a comeback in the 19th century). The pivotal battle is won by a single shot, Christina aiming her rifle at an ammunition wagon – guided by the spirit of her dead father – to cause an explosion that instantly kills all the Turks while leaving the Greeks unscathed. A Turkish soldier shows his native cruelty by taking a savage bite out of a bunch of grapes. Our heroine portentously warns that “my blade will taste the blood of anyone who violates my honour” (to be fair, she’s narrowly avoided getting raped at the time). Her actions at the climax are supposed to be inspirational, but just seem… puzzling.

So it goes, this stilted – but well-meaning – drama, bad in the way of state-funded nationalist epics, bad in the way of those made-for-TV Biblical parables we get during Easter week. All that said, I suspect I’d enjoy the film more (and might even have found it so-bad-it’s-good) if it weren’t about Greece, and by extension Cyprus. That’s how it goes, after all, the motherland forever resenting the diaspora for being stuck in the past, the diaspora forever looking down on the motherland for no longer being the place they’ve been told about. Nicosia cares about the now, the economy and the serial killer, Astoria cares about old traditions and ancestral hatreds, the ethnic pride – Cliffs of Freedom includes a reference to the Greeks having invented democracy – which still clings, when all else has faded, to every diaspora. Don’t be angry; this is what they do.