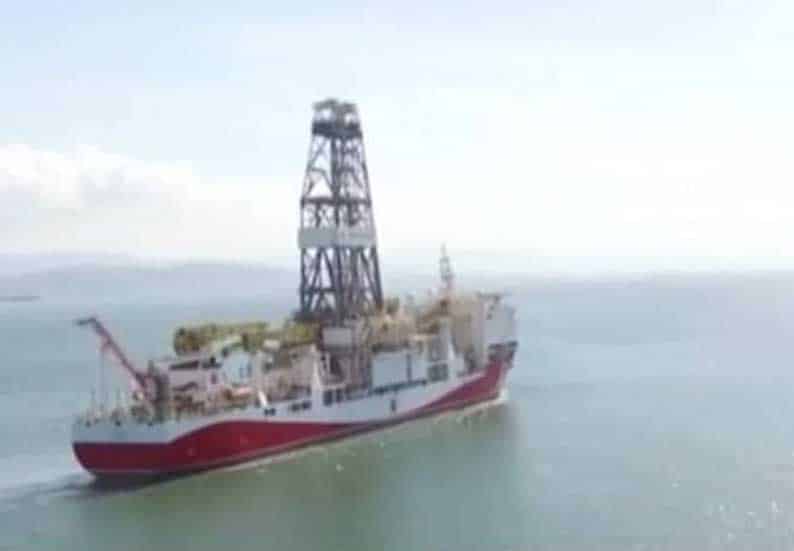 Authorities have begun procedures to have an international arrest warrant issued for the crew of the Turkish drillship operating in the northern part of Cyprus’ exclusive economic zone (EEZ).

An application for a warrant was submitted on Monday to Nicosia district court, Undersecretary to the President Vasilis Palmas told a local radio station.

Depending on the court’s decision, Cypriot authorities would then relay the international arrest warrant to Europol.

The court was expected to deliver its decision in the afternoon.

Meanwhile foreign minister Nicos Christodoulides stated that on Saturday President Nicos Anastasiades will be convening the National Council to discuss the latest Turkish actions in the EEZ.

Christodoulides said that last Saturday Cypriot authorities submitted to the United Nations the coordinates for the boundaries of the EEZ and the continental shelf, based on the median line that is equidistant from the shores of Cyprus and Turkey.

The coordinates would also be published in the government gazette, giving them the force of law.

Discussions are underway on a diplomatic level with the aim of preparing counter-measures, he added.

The EU, the United States and the UK have already released statements expressing concern that Turkey’s latest action offshore Cyprus may stoke tensions in the region.

On Friday, Turkish authorities issued a Navtex (navigational telex) advising that the drillship Fatih would be carrying out ‘drilling operations’ in an area west of Paphos from May 3 to September 3.

The Fatih is being supported by three other vessels.

Turkish media on Saturday cited Turkey’s Foreign Minister Mevlut Cavusoglu as saying the Fatih had started drilling in areas for which northern Cypriot authorities had issued a permit.

It’s understood the vessel has yet to begin actual drilling. This could occur later on Monday or Tuesday.

MarineTraffic, a vessel tracking website, shows that the Fatih is currently stopped, at a location west of Paphos and a latitude just north of Peyia.

Over the weekend authorities transmitted via Radio Cyprus a navigational warning to the Fatih, advising its crew that they are “conducting illegal operations in the exclusive economic zone and the continental shelf of the Republic of Cyprus.

“Your actions are violating the international law and maritime safety procedures and you are committing serious criminal offences under the laws of the Republic of Cyprus.”

Turkey responded with a broadcast describing Radio Cyprus as an “unauthorised station.”

Although technically the Turkish drillship is operating in the Cypriot EEZ, it is located in an area that has not been licensed by Cyprus for hydrocarbons exploration.

According to daily Politis, the government may have been caught unawares by the Turkish move. Following news of the drillship’s arrival, it said, Cypriot authorities were scrambling to submit to the United Nations the coordinates for the northern part of Cyprus’ EEZ.

Citing unnamed government sources, the paper said that about six months ago the foreign minister had called on Ankara to engage in dialogue to delimit the respective EEZs of the two nations.

Turkey rejected the approach, on the grounds it does not recognize the Republic of Cyprus. The Turkish response was given in written, the same report said.