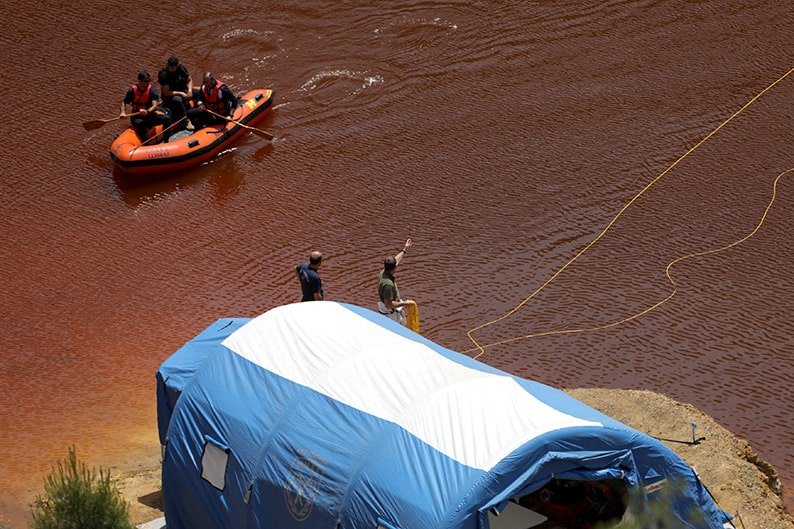 Using state-of-the-art sonar and a robotic camera, the search at the Mitsero red lake resumed Monday morning for a third suitcase that may contain the remains of one of the seven victims of a serial killer.

A suitcase was retrieved from the lake on Sunday containing a badly decomposed body that has not yet been identified. This was the second body recovered from the toxic lake. A woman’s body was found in a suitcase there on Easter Sunday, April 28.

The sonar swept the lake from the morning,  recording data in the search for a third victim. After the data was to be analysed and there was evidence something might be there, a decision to send divers would be made.

Reports from the scene at around 11.30am said the robotic camera had been sent back into the lake and that this was a sign something had been located. Minutes later divers began preparing their boat and gear to enter the lake.

According to the suspect’s alleged confession, he threw three of his seven victims in the red lake; Romanian mother and daughter Livia Florentina Bunea, 36 and Elena Natalia, 8, who disappeared on September 30, 2016, and 30-year-old Maricar Valdez Arquila from the Philippines who went missing in December 2017.

On Sunday when the second suitcase was brought up, it was not immediately clear whether it was a woman or a child, police said, and it was taken to the morgue for further examination.

Information began to leak out shortly afterwards that the body was fully clothed and was likely that of a child so probably Elena Natalia.

Five bodies from seven have now been recovered. Two other victims remain unaccounted for. If the bodies recovered from the red lake turn out to be Livia and her daughter Elena Natalia, the remaining two victims to be found will be Maricar Valdez Arquila, and Sierra aged six, the daughter of Mary Rose Tiburcio, 39, also from the Philippines. The suspect allegedly told police he threw Sierra’s body in Memi lake in Xyliatos but daily searches have not yet found any trace of her.

Pep: this is the toughest league I’ve ever played as a manager