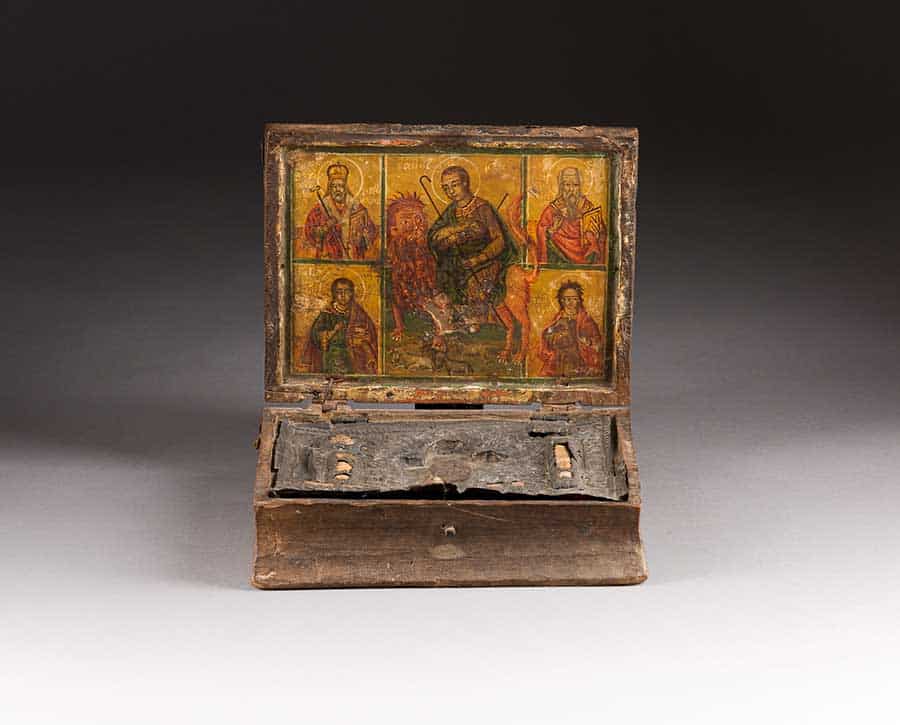 A casket with the relics of saints originally from St Mamas church in Morphou will be returned to its rightful owner, the Metropolis of Morphou, later this month, a German auction house announced on Monday.

The little box, shaped like a book and supposedly containing the relics of St Mamas and other saints, had been scheduled to be auctioned off on April 12 in Duesseldorf, Germany by Hargesheimer Kunstauktionen GmbH.

“It already aroused international interest and attracted numerous bidders,” an announcement by the auction house published on Monday said.

But due to the intervention of the internationally renowned specialist for Byzantine art, Maria Paphiti, it was withdrawn shortly before it was about to be auctioned – in fact during the process of the auction.

Paphiti had found out that following the Turkish invasion the reliquary, like many other art treasures and cultural artefacts, had been stolen and traded abroad.

According to the announcement, the heiress of a deceased icon collector from northern Germany who consigned the object to the auction had been unable to trace its journey to Germany and its prior history due to the lack of documents.

The managing directors of the auction house, Susanne and Frank Hargesheimer, decided to purchase the casket with the holy relics from the consignor in order to donate it as a gift to the rightful owner.

The casket has the form of a leather bound book. The lid opens to reveal in the centre St Mamas riding a lion, surrounded by four saints. The box is believed to contain relics of the portrayed figures, as well as of other saints.

In the late Middle Ages, St Mamas was greatly venerated, especially in Cyprus. Legend has it that the saint‘s coffin floated to Cyprus after his parents released it to the sea. In the following years Mamas was turned into a Cypriot: he lived on the island as a hermit.

According to another legend, he had been arrested for non-payment of a poll tax. When he arrived at the governor‘s palace, riding a lion and holding a lamb on his lap, he was assured lifelong tax exemption. He is therefore considered the patron saint of tax advisors, as well as tax officials, taxpayers and tax evaders.

The official and public handover of the reliquary to the representative of Metropolitan Neophytos of Morphou, the Archimandrite Fotios Ioakeim, will take place on May 14 at the premises of Hargesheimer auction house in Düsseldorf, in the presence of the Byzantine art expert Maria Paphiti, and representatives of the embassy of Cyprus in Germany and the department of antiquities in Cyprus.