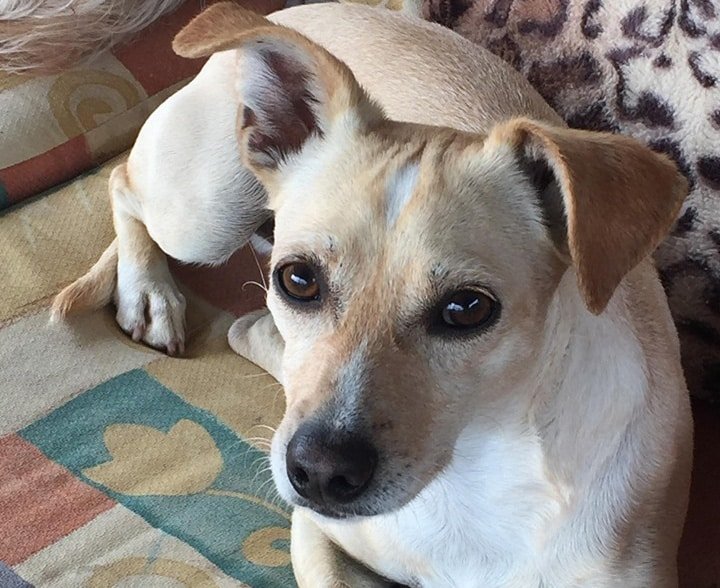 Mr Longbody, one of two dogs belonging to Julia Sinden, that was fatally poisoned

Pet owners living on a street in Argaka in Paphos have been left reeling after seven dogs and two cats were poisoned over the weekend. Only one dog survived.

Poison was placed along the roadside, some of it in pieces of meat, which the dogs and cats either licked or consumed, as all were discovered with signs of poisoning, such as frothing from the mouth.

A piece of meat and a white powder discovered in the area are currently undergoing analysis, according to head of the animal party, Kyriacos Kyriacou.

“Police at the headquarters in Nicosia are taking this matter very seriously. Statements have been taken and an autopsy performed on one of the dogs to find out what poison was used. This is inhuman and barbaric behaviour,” Kyriacou told the Cyprus Mail on Monday.

The latest poisoning is particularly devastating for one of the pet owners, Julia Sinden, as in January last year, five of her pet dogs died after consuming poisoned meat in a nearby field.

This time, two of her dogs, Toby, nine, and Mr Longbody, aged two, were found dead on the roadside and in a neighbouring field.

“We are all so upset, I have seven, they are all rescues. After my dogs were killed last year, my partner found a mum and four pups in a rubbish dump and we rescued them. Five separate families on this street have been affected by this awful act,” she said.

Sinden said that two pet cats of neighbours were also victims of the latest poisoning.

Some of her dogs live inside the house and others in a large enclosure in her field. This is now the only area she feels is safe to exercise her dogs, she said.

The stretch of road were the poisonings have occurred is around 700 metres long and the animal lover said that none of the residents feel they can even walk their dogs on a lead anymore, following this traumatic experience, as they may wind up dead.

The only dog that survived the poisoning is a neighbour’s female Labrador that was being walked along the road running past Sinden’s property, on a lead. The dog was administered an antidote and rushed to the vets just in time to save her, said Sinden.

Mini Pinscher sisters ‘Lika’ and ‘Zara’ were two and a half years old and were let out of the house at 8.15am on Sunday morning as usual, they always returned a few minutes later. But this time, they were found collapsed an hour later.

“Their mouths were foaming and one was already dead, the other barely breathing and she died seconds later,” Trapalis said.

This was the fourth time the dogs had been poisoned.

The dog owner is waiting for the results of an autopsy and is hoping that the perpetrator will be found and punished quickly. She questioned why the illegal practice is so prevalent in the area and why the poison was so quick to kill.

“Many children were going up and down this road at the weekend. One of them could easily have touched something and then their mouth,” said the mum of four.

“All of the animals had homes and families that loved and cared for them. This evil person laced meat with poison, fully aware that animals, especially dogs and cats would devour what they would have thought was a treat.”

Police are currently investigating a number of leads, confirmed Kyriacou.

Kyriacou said that the latest poisoning, as with all other cases, has to be taken seriously and highlights the need for a new, drastic campaign to ensure that the barbaric act stops.

“Today a dog, tomorrow a child,” he said.

Our View: Will Turkey prove might is right yet again?