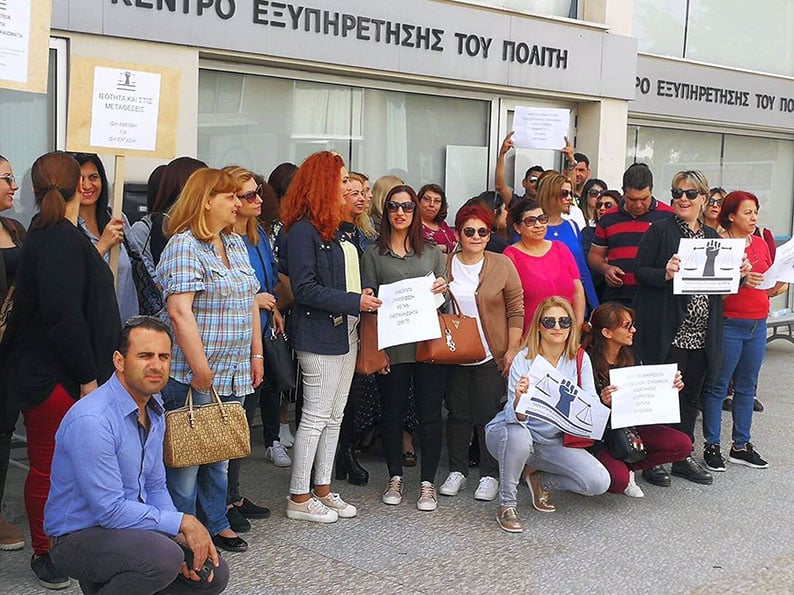 Workers from Nicosia Citizens' Service Centre on strike on Wednesday

Most of the Citizen Service Centres across the island halted operations for two hours on Wednesday morning to support demands by some of their contract staff for equal rights with permanent staff colleagues.

Members of trade union Isotita (Equality) downed their pens between 10am and noon and will do so on Thursday, Friday and on May 15 threatening to escalate measures unless the government abides by the EU directive on fixed-term employment. This stipulates that when workers are on fixed-term contracts they must not face unjustified discrimination.

During the work stoppage the workers in Nicosia gathered outside the finance and trade ministries while those in other towns protested outside the citizen service centres.

Board chairman of Isotita, Prodromos Christofi, said that the union wants the government to comply with the directive that calls for equal treatment of contract staff with the comparable permanent staff that perform the same or similar duties.

He said they would also like an end to the irregular practice of hiring people on contracts to cover permanent needs.

Christofi also demanded that European, international and domestic laws on workers’ union representatives be respected in terms of Isotita’s board members. The union had reported in an announcement on Tuesday attempts to obstruct its board members from performing their union duties.

The finance ministry announced on Tuesday that the work stoppage would affect all centres except those in the Famagusta district and Polis Chrysochous, which were to operate non-stop between 8am and 5pm.

Those in Engomi and Makarios Avenue in Nicosia, Limassol, Larnaca, Paphos, Kolossi and Pelendri operated between 8am and 10am and between noon and 5pm from Wednesday to Friday.

The citizens’ service centre in Kato Pyrgos will remain closed on Thursday.

Tourism revenue up despite drop in spending