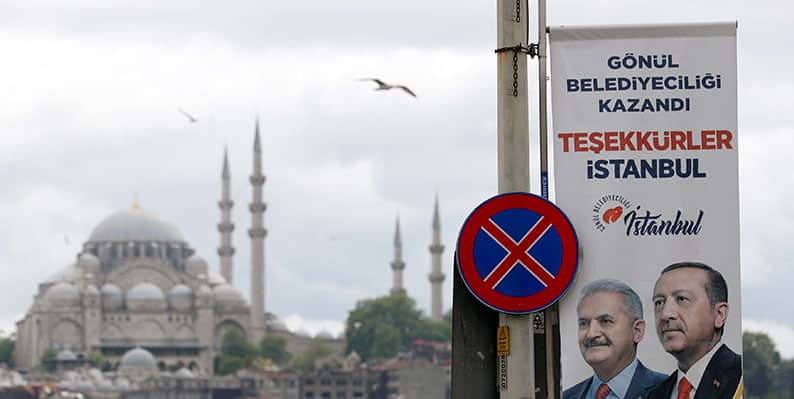 An election banner with the pictures of Turkish President Tayyip Erdogan and AK Party mayoral candidate Binali Yildirim is seen over the Galata bridge in Istanbul, Turkey

Turkey’s long road to economic reform may have grown bumpier this week when authorities ordered a re-run of an Istanbul city election, further testing the patience of investors seeking a break with policies that triggered last year’s currency crisis.

After weeks of petitions and pressure from President Tayyip Erdogan’s AK Party (AKP), which narrowly lost the city’s mayoralty in a March 31 vote, Turkey’s election board declared the results invalid and set a new vote for June 23.

The lira has tumbled 2.5 percent since the ruling late on Monday, reflecting worries that during the coming election campaign the government could again pursue short-term stimulus measures such as tax cuts and costly steps to support the currency.

The lira fell 30 percent last year when Turkey tipped into recession, and has lost another 16 percent so far this year. The waning confidence, driven in part by the AKP’s election challenges, is the single biggest hurdle to reviving an economy plagued by high inflation and companies’ foreign-currency debt.

“Re-running the elections is a negative development in that it extends this period of uncertainty,” said Edward Parker, managing director overseeing Turkey at Fitch Ratings, which last week reaffirmed a junk ‘BB’ rating on its sovereign debt.

Echoing that view, Wolfango Piccoli, co-president of Teneo political risk advisers, said: “The prospects for reforms were bleak before and they are even bleaker now after the cancellation of the mayoral election in Istanbul.”

At the heart of Turkey’s economic malaise is years of cheap foreign funding that drove a construction-driven boom under Erdogan. Once the lira collapsed last year, firms could not pay off debts, which exposed their lenders and employees.

While the government is targeting tens of billions of dollars worth of bad loans in the energy and real estate sectors, it has provided few details of the plan.

Many analysts, wary of past reform promises that fell short, have been disappointed that more specific commitments were not made to boost exports in coming years and emphasise the independence of the central bank to lower inflation from nearly 20 percent.

Albayrak, Erdogan’s son-in-law, canceled an appearance on Wednesday at a conference in Sarajevo to discuss a rebalancing of Turkey’s economy, leaving another Treasury official to make a presentation.

“There is a point where one asks whether Turkey will have continual setbacks like this – there could be other domestic political issues, and there are obviously international issues and many risks there with the U.S. relationship,” said Parker of Fitch Ratings.

“Eventually too many of these little setbacks can add up and prove costly,” he said. Fitch has a ‘negative’ outlook on Turkey’s rating.

Adding to the political uncertainty, the main opposition Republican People’s Party (CHP), whose candidate won the March vote in Istanbul, said on Wednesday it had formally requested the annulment of Erdogan’s presidential mandate and other poll results. It said the flaws Erdogan alleged in the Istanbul poll also occurred in last year’s national elections.

The lira selloff since March comes as the United States threatens to impose sanctions on NATO ally Turkey over its planned purchase of Russian S-400 missile defence systems. The shipment is expected to come just after the June 23 vote.

All of this “could be a perfect storm” for the lira, said Cristian Maggio, head of emerging markets strategy at TD Securities.

The re-run decision “concludes in the worst possible way an electoral saga that lasted for just over a month”, he added.

Christodoulou auditor says he was told nothing about €1m payment