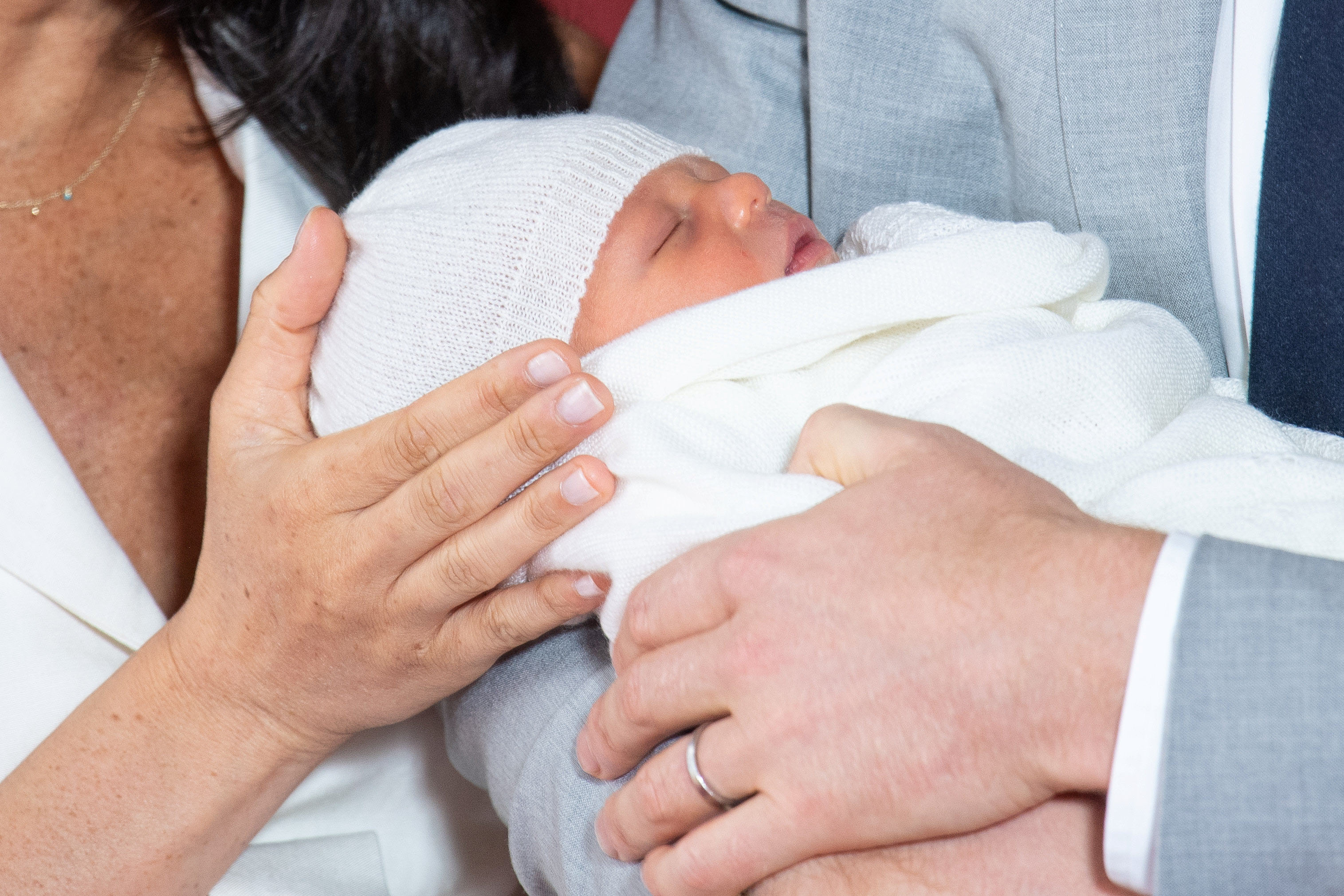 Britain's Prince Harry and Meghan, Duchess of Sussex are seen with their baby son, who was born on Monday morning, during a photocall in St George's Hall at Windsor Castle, in Berkshire, Britain May 8, 2019

Britain’s Prince Harry and his wife Meghan announced on Wednesday they had named their newborn son Archie as they showed him off to the world, saying their “little bundle of joy” was magic.

In a post on their Instagram account accompanying a picture of the parents with Queen Elizabeth, her husband Prince Philip and Meghan’s mother Doria Ragland, the couple said the seventh-in-line to the British throne would be known as Archie Harrison Mountbatten-Windsor.

The announcement came hours after the new royal got his first taste of life in the limelight as Meghan and Harry appeared with him before a small group of media at St George’s Hall in Windsor castle where they held their wedding reception just under a year ago.

Harry tightly cradled his son, wrapped in a white shawl and wearing a hat.

“It’s magic – it’s pretty amazing and I have the two best guys in the world so I am really happy,” said a beaming Meghan, wearing a white sleeveless coat dress, when asked how she was finding being a new mother.

She said the boy, the seventh-in-line to the British throne who has not yet been publicly named, was calm, had the sweetest temperament and was sleeping well.

“He’s just been the dream,” she said, prompting Harry to quip: “I don’t know who he gets that from”.

Archie was born in the early hours of Monday morning, weighing 7 lb 3oz (3.26 kg), but few other details have been given about the birth.

“It’s great, parenting is amazing,” Harry said. “It’s only been two-and-a-half days, three days, but we’re just so thrilled to have our own little bundle of joy, to be able to spend some precious time with him as he slowly starts to grow up.”

After the brief photocall, the couple took their baby to see 93-year-old Elizabeth, the world’s longest-reigning monarch, to allow her to meet her eighth great-grandchild. Meghan’s mother is staying with the couple at their home Frogmore Cottage, on the castle’s estate.

“It will a nice moment to introduce the baby to more family and my mum’s with us as well,” Meghan, 37, said.

Britain’s royal family attracts huge fascination and there is particular interest in Harry and former U.S. actress Meghan, who are officially known as the Duke and Duchess of Sussex.

A BRITISH AND U.S. CITIZEN?

Given their worldwide popularity, the birth of their first child has attracted particular attention, especially as Archie is first mixed race child to be born into a senior position in British royalty in recent history.

He is also entitled to hold U.S. citizenship while also automatically being a British national. However, the baby will not automatically be a prince or a princess, or be known as “His Royal Highness”, unless the queen issues a specific decree.

Congratulations to the new parents have poured in from celebrities and world leaders.

Harry’s father, the heir-to-the-throne Prince Charles expressed his joy at the arrival of his fourth grandson on Tuesday, while elder brother Prince William and his wife Kate said they were absolutely thrilled at the news.

“Thank you all so much, and thank you everybody for all the well-wishes and the kindness, it just means so much,” Meghan said.

Archie, one of the 20 most popular names for baby boys in Britain, was not among any of the names being tipped by bookmakers and Harrison is another break with those traditionally given to British royals.

Some commentators have argued that the birth marks another milestone in the gradual modernisation of the almost thousand-year-old monarchy.

“You are the first child in almost three centuries to bring Africa back into the royal gene pool,” Trevor Phillips, the former head of Britain’s Equality and Human Rights Commission, wrote in an open letter to the newborn.

“You are seventh in line to the throne — and everything you bring with you will now be part of the public life of our nation.”

However, not everyone has been happy with the way the couple have handled the publicity around the birth and how much information has been given to the media.

Harry has never made a secret of his dislike of the press since his mother Princess Diana was killed in a crash in 1997 as her car sped away from chasing photographers.

“Choosing a U.S. Network … is treading on dodgy ground,” the queen’s former press secretary Dickie Arbiter wrote on Twitter about the decision to have a U.S. TV crew in the small group invited to cover Wednesday’s event.

However, Harry was more than happy to help out the media as he showed off Archie, cracking a joke as he pulled back the blanket to allow cameras to get a better look at his son.

“He’s already got a little bit of facial hair as well – wonderful,” joked the bearded prince.

No time to go ‘wobbly’: Pompeo scolds Britain over Huawei