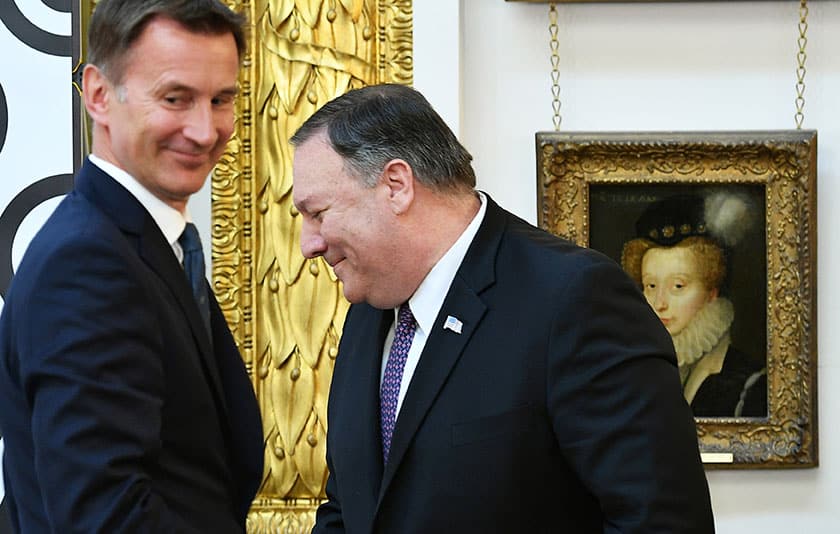 US Secretary of State Mike Pompeo told Britain on Wednesday it needed to change its attitude towards China and telecoms company Huawei, casting the world’s second largest economy as a threat to the West similar to that once posed by the Soviet Union.

Pompeo questioned the attitude of Prime Minister Theresa May’s government towards Beijing and goaded London by saying that the late former British leader Margaret Thatcher, who was known as the Iron Lady, would have taken a much firmer line with China.

He brought a tough message to Britain, which agreed last month to allow China’s Huawei Technologies a restricted role in building parts of its 5G network.

“Now is not the time for either of us to go wobbly,” Pompeo said in a speech of the so-called special relationship, paraphrasing what Thatcher once famously told late US President George HW Bush.

“In China, we face a new kind of challenge; an authoritarian regime that’s integrated economically into the West in ways that the Soviet Union never was,” Pompeo said.

The United States has told allies not to use Huawei’s technology to build new 5G networks because of concerns it could be a vehicle for Chinese spying, an accusation the firm has denied. Britain has indicated it would allow the company a restricted role.

“Ask yourself: would the Iron Lady be silent when China violates the sovereignty of nations through corruption or coercion? Would she allow China to control the internet of the future?” Pompeo said.

“Insufficient security will impede the United States’ ability to share certain information within trusted networks. This is just what China wants – to divide Western alliances through bits and bytes, not bullets and bombs.”

“The Chinese government can rightfully demand access to data flowing through Huawei and ZTE systems. Why would anyone grant such power to a regime that has already grossly violated cyberspace?” he asked.

“We know 5G is a sovereign decision – but it must be made with the broader strategic context in mind,” he said.

Pompeo came to London for talks with May and foreign minister Jeremy Hunt a month before President Donald Trump makes a formal state visit that is likely to generate political controversy and large street protests.

He said Russia’s Nord Stream 2 project, a project to build a gas pipeline from Russia to Germany, should not be allowed to proceed.

He praised the Britain’s stance on North Korea. However, his warm words did not mask disagreements between the two allies over Iran and particularly Huawei.

British Culture Secretary Jeremy Wright said separately it was still possible that the roll-out of 5G networks in Britain could be delayed by a review into telecoms equipment, adding: “The primary intention of this process is to get the security of the network right.”

The two countries have also disagreed on Iran.

On Wednesday, Iran announced it was relaxing curbs on its nuclear programme under the 2015 deal with world powers, and threatened to do more – including enriching uranium to a higher level – if other countries did not shield it from US sanctions.

The United States withdrew from the pact last year, while Britain, France, Germany, China and Russia stayed in the accord with Tehran, under which Iran’s nuclear curbs were rewarded with lifted sanctions.

Pompeo told reporters the United States would make decisions on how to respond when it saw what Iran’s actions were. Tim Morrison, Special Assistant to the President, told a conference in Washington to “expect more sanctions … very soon”.

“I urge the UK to stand with us to rein in the regime’s bloodletting and lawlessness, not soothe the Ayatollahs angry at our decision to pull out of the nuclear deal,” Pompeo said.

Earlier, Pompeo met May, who has been grappling with a political crisis over Britain’s planned exit from the European Union.

“President Trump is eager for a new free trade agreement that will take our Number 1 trade relationship to unlimited new heights,” Pompeo said of the future relationship with Britain.

“We’ve filed all the papers we can at this point. We’re ready to go.”